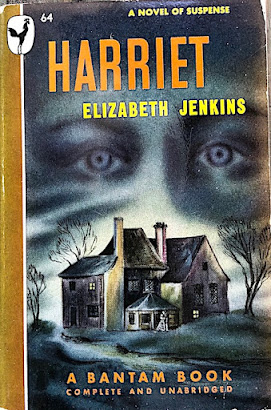 "But Harriet's condition...had blinded Mrs. Ogilvy to the fact that the world contains many people who are far from decent."

If you had never read anything about Harriet (1934) by Elizabeth Jenkins -- not a review, not a blurb, not anything on the back covers of its many editions -- you would never expect it to turn out the way it does. From page one Harriet prepares the reader for a mesmerizing trip into England's Victorian past from the author's attention to domestic details, to the class hierarchy, to the painstakingly rendered 19th century syntax and language. It appears on the surface to be a homage to the age old story of a ne'er-do-well fortune hunter flirting with an ugly duckling heiress, successfully manipulating her easily swayed emotions and eventually marrying her for her money.  Henry James told a similar story in Washington Square, countless romance novelists have capitalized on this plot in hundreds of cheap entertainments.  What makes Elizabeth Jenkins' novel striking, no less appealing as an entertaining suspense novel, is that the ugly duckling heiress is also developmentally handicapped. Harriet Woodhouse is called a "natural" (a Victorian euphemism for someone who is mentally retarded) by her mother and those who have an affection for her.  She is called much worse by those who treat her with indifference, jealousy or outright cruelty. Above all what makes this novel most shocking is that Jenkins based her story on a notorious criminal case in which four people were charged with criminal neglect, wanton cruelty and eventual murder of a young woman and possibly her child. The story of Harriet is not the product of a novelist's imagination. It actually happened in 1875.

From the outset we know that Lewis Oman is no good. He has no real job, he enjoys using woman, and thinks nothing about turning Harriet into an object of ridicule. He tells his lover Alice Hoppner that he will become the charmer for Harriet. "She's going to fall a victim to my fascinations. You keep a straight face, and we'll have some fun." Alice watches with a combination of revulsion and jealousy as Lewis' aimless flirting transforms into something far more dangerous and cunning. His attentions cease to become fun and games when Alice notices Harriet has fallen in love with him. Then Lewis learns Harriet has a small fortune held in trust that will become hers as soon as she marries and, of course, he homes in on Harriet with relentless charm and smarm. Harriet is no longer a plaything but the means to instant wealth for this schemer.

Mrs. Ogilvy, Harriet's mother, is onto Lewis from the start and attempts to prevent the marriage. She tries reasoning with him but is too shrewd. She tries to block the marriage legally by exploiting Harriet's mental disability and making her a ward of the state.  But Lewis knows Mrs. Ogilvy who loves her daughter and treats  could never take the next step which would require her to put her daughter in a state run institution.  He also threatens the woman by promising to tell Harriet of her plans. If he does so he promises Mrs Ogivly that would be the end the mother/daughter relationship she has so carefully cultivated. 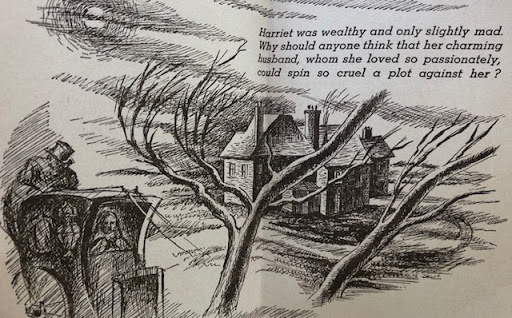 But there are others who become involved in the destruction of Harriet's carefully sheltered world. Once she has married Lewis her exploitation begins and with it the inexorable ruin of her health, her personality, and her soul. Harriet has a child almost without Jenkins having told us and she is quickly shuttled off to Lewis' brother Patrick where she is set up as a long term house guest and then months later as a prisoner.  The horror of Harriet's story, the ingenuity of the novel as a whole, is the skill with which Jenkins manages to capture a flavor of Victorian comfort and domesticity and how the introduction of an unwanted guest slowly erodes the veneer of civility among the household's would be aristocrats.

Elizabeth Hoppner Oman, Alice's sister and Patrick's wife, seems like the one person who might become an ally for Harriet. But when Harriet moves into her home Elizabeth, once ever proper and courteous, soon grows weary of having to deal with Harriet's childish demands, putting up with her imperfect grammar and most of all Harriet's lack of comprehension in learning how to care for her own son. Elizabeth is more concerned with propriety and her relationship to Lewis and Alice who is now being passed off as Lewis' real wife, though he is legally married to Harriet. Astonishingly, for someone who presents herself as upright Elizabeth turns a blind eye to the immorality and deceit of this pretense. When Lewis tells Patrick that Harriet should remain isolated in an upstairs bedroom and not be allowed outside Elizabeth is relieved to be spared the humiliation of telling everyone that Harriet is the real Mrs. Oman. The ultimate revelation of Elizabeth's remarkably repellent transformation comes when she utters a statement she thinks excuses not only her own indifference but the cruelty of her barbaric husband who beats Harriet: "After all, it isn't as if she feels anything..." 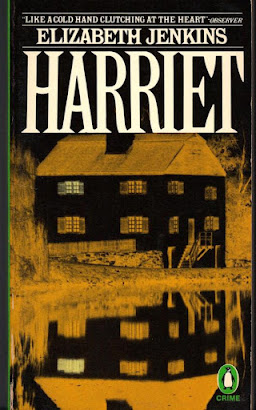 Taking the idea of the yet-to-be-named subgenre of "domestic suspense" to its extreme Jenkins includes several excellent set pieces that highlight a Victorian household turned topsy-turvy when a family member with erratic, unpredictable behavior upsets their comfortable routines. With incredible detail we are shown how meal times are structured, the apparently agonizing selection of clothes, the mundane tasks of getting dressed and having hair meticulously styled. While all the other characters are caught up in the inundation of domestic life the horror of what is happening to Harriet who is being neglected and ignored by everyone but the compassionate maid Clara becomes all the more heartwrenching. Her clothes and her jewelry are appropriated by Alice; her child is taken away from her; she is denied doctor's care when she becomes violently ill; meals are regularly delayed, reduced to nothing more than milk and bread or entirely withheld -- all of this done for the slightest affronts to the household members. All of this leads to a radical transformation in Harriet's already fragile mental state. With each new instance of Harriet's deteriorating mind each family member reacts not with kindness, concern or even alarm but with unnerving cruelty, sometimes giving into savage brutality. When Penguin reprinted Harriet 1980 they called the novel an "absolutely spine-chilling exploration of the depths of human depravity." 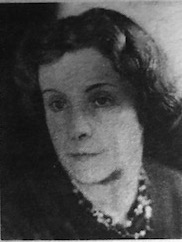 Harriet won a literary prize for its author in 1934, one of the last of the short-lived Prix Femina Vie Heureuse, given out by two French magazines to an English language novel that best presents life in England to a French language audience. The award should actually be for Jenkins' masterful invention of a new genre, the true crime novel. For here is a fictionalized account of a long past actual criminal case characterized by aberrant behavior accurately imagined with vivid insight and keen observations, teeming with paradoxes and riddles of human inconsistency, that it rightfully belongs in the same category as the "non-fiction novel" -- something Truman Capote claimed to have invented three decades later with In Cold Blood.

Her achievements are all the more powerful when you realize that using a non-fictional account (The Trial of the Stauntons), a copy of the court transcript from 1877, and her own imagination she envisioned a world two centuries ago in which something so evil could be carried out with such commonplace ease. As a side note students of true crime might like to know that the Staunton trial is now considered a landmark in appeals cases. In real life though all four individuals charged with Harriet Staunton's murder were found guilty and sentenced to hang no one was executed. A published letter written by a group of physicians protested that the true medical evidence was overlooked during the trial and the judge Henry Hawkins was prejudiced against all four defendants. The court's verdict was overturned:  Alice was pardoned, Louis and Elizabeth were sentenced to hard labor and eventually set free. Patrick who died in prison never reaped the benefits of this unusual decision.  Jenkins did not agree with the overturned verdict and her characters get the harsh punishments and justice she felt was mocked by real life's own cruel ironies.

Harriet is available in a new edition from Valancourt Books published five years ago. This latest edition includes an afterword by literary critic and Victorian scholar Catherine Pope. Readers can also choose form a wide variety of used editions dating back to the US paperback of 1946 (Bantam 64, shown in two illustrations on this post) to the handsome reprint from Persephone Press. There are also French and Spanish language translations in contemporary reprints