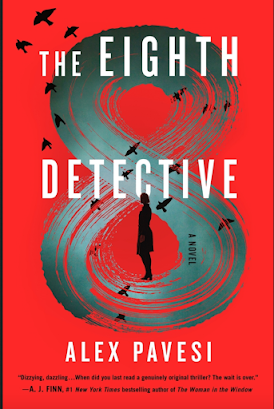 "I think that when you're reading about death as entertainment it should leave you feeling slightly uncomfortable, even slightly sick." -- Julia Hart, The Eighth Detective

Devotees of Golden Age detective fiction are well aware of the may lists of rules that cognizant and often protective writers of the genre have devised as suggestions for those who wish to adhere to the fair play tenets of mystery storytelling that make detective fiction a kind of intellectual competition between reader and writer.  Ronald A. Knox's Decalogue and the 20 Rules of Willard Huntington Wright as "S. S. Van Dine" date back to the early 20th century and for the most part are now tacit instructions followed by novice and veteran mystery writers alike.  There have been countless deconstructions of these rules as mystery fiction faced challenges from post-modern writers like Gilbert Adair and Paul Auster who wrote intellectual send-ups of the detective novel. In the case of Josef Škvorecký's short story collection Sins for Father Knox (1973) a detective story writer defiantly wrote ten stories which break each of the hallowed ten rules set forth by Knox. Now we have yet another deconstruction of the conventions of detective fiction in a new short story collection that is also a clever novel in which the "ingredients" of a generic detective story plot are mixed up and presented in a medley of rearrangements of those ingredients. In essence The Eight Detective gives us variations on the theme of victim, suspects, and detective.

The idea is very simple.  It is 1970 and Grant McAllister, a retired mathematician living a solitary life on an undisclosed Mediterranean island, is visited by an editor eager to reprint his privately published mystery short story collection of thirty years ago, The White Murders, a book that has achieved cult status among crime fiction collectors.  The book contains seven stories that comment on McAllister's  mathematical/literary essay "The Permutations of Detective Fiction" published in 1937 in a small journal called Mathematical Recreations. Over the course of the novel Julia Hart, the editor, reads the stories in the presence of McAllister and then discusses them afterward.  We, as readers, are treated to all seven stories and each of the seven ensuing "Conversations." But it is not just a story collection. The stories themselves fuel a mystery that create the story of the novel.

Julia begins to notice oddities in the structure of each story, elements she calls "discrepancies." By the fourth instance of these discrepancies Julia believes they are meant as clues to a larger mystery McAllister has laid out in secret within all seven tales. She is certain the mystery involves a notorious murder that occurred around the time McAllister was writing these stories. Julie believes that the title of the collection The White Murders is not referring to the many settings of white buildings as McAllister claims but instead to an actress and playwright named Elizabeth White who was found strangled back in 1940. Her killer was never found. As the reader progresses from story to story he may find himself matching wits with Julia trying to find the "discrepancy" in each story before she reveals it in the "Conversation" chapter immediately following. McAllister is elusive and cryptic in answering Julia's penetrating and provocative questions. Is he feigning ignorance or is he genuinely telling the truth?  Is Julia imagining wholly coincidental parallels to Elizabeth White's murder?

Those readers who take up the tacit challenge will find themselves turning literary detective and amateur linguist as the solving of a mystery turns away from the standard whodunnit and whydunnit questions and becomes the mystery of syntax and word choice and off putting plotholes. Some examples:  Pavesi has fun with the use of colors throughout the stories (in one story all of the characters are named after colors), unusual choices of adjectives, and allusions to well known detective stories and novels. But is this all there is to the mystery of The Eighth Detective?

Of course not. The Eighth Detective could not be a real detective novel unless it also had some sort of inherent murder mystery. Julia's perspicacious reading uncovers a genuine mystery that relates to Elizabeth White's murder.  No more can I say about this cleverly worked out mix of word puzzles, stylistic mysteries in seven different narratives, and the overarching mystery Julia uncovers. You can only truly enjoy the challenges and imaginative riffs by discovering them on your own.

Alex Pavesi, himself a mathematician, is clearly is a fan of mystery fiction.  He has written seven fine examples of mystery short stories that will recall a variety of writers. Notably, "Trouble on Blue Pearl Island" is most obviously his homage to And Then There Were None (who hasn't written one of these lately?) that answers one of McAllister's variations of the "ingredients" in giving us a story in which all the suspects are murdered. The murder methods are diabolical, far from the kind of thing one finds in Golden Age mystery fiction unless you have indulged in the American shudder pulps of the 1930s and 1940s. Though the plot is clearly a mirror of Agatha Christie's landmark murder mystery it often reminded me more of the Saw horror movie franchise. Be prepared!

Of the other six stories I enjoyed most of all "Death at the Seaside" featuring a Carr-like egomaniacal amateur detective named Winstone Brown and is the most fairly clued of the stories; "A Detective and His Evidence" atypically nasty and amoral in tone which is explained rather brilliantly in the finale; and "The Cursed Village," the most ambitious of the stories in its variation on the theme of both multiple criminals and multiple solutions. In fact, by the time the reader has reached the final page of The Eighth Detective he may discover that the book was also a homage to Christianna Brand, the queen of multiple solutions.

I enjoyed some of the philosophical ideas contained in McAlllister's essay "The Permutations of Detective Fiction " and he of course outlines those ideas in one of the many "Conversation" chapters. But the essay is reductive rather than all-encompassing in its discussion of detective fiction in terms only of victims, suspects and detectives.  Julia at one point says his theory is inherently flawed because these four "ingredient" sets and subsets cannot account for a murder mystery with multiple crimes committed by more than one suspect as often occurs in the work of my favorite Golden Age neglected writer Vernon Loder. McAllister dismisses that observation with a lame excuse: "It's cheating really."  Yet as I see it in the 21st century there really can be no cheating when it comes to writing detective fiction.  In this type of imaginative writing there never were any real rules -- only expectations of a defined set of narrative conventions. In the end the entire novel is one huge piece of ironic fiction writing. For what Pavesi does in The Eighth Detective so ingeniously is to point out that even McAllister's "permutations" can be flouted and defied.