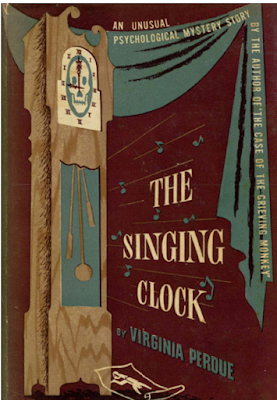 THE STORY:  In the middle of the night Jacklin Bogart discovers the dead body of her cousin Antoinette and proceeds to cover up the crime. She is certain she knows who is guilty. We watch her remove the weapon from the scene and bury it far away, then she washes blood off her clothes. Lt. Brady arrives on the scene and is too clever to be fooled by Jacklin's charade. He knows she is shielding someone and perhaps trying to incriminate one of her relatives she so hates. Soon we learn that Jacklin is highly suspicious of nearly all her relatives and suspects someone guilty of not only killing her mother but trying to do in her beloved grandfather. When another murder occurs in the home it is clear to Brady that Jacklin's meddling is endangering the lives of the entire Crandall household.

THE CHARACTERS: Jacklin is one of the earliest renditions of the now tired cliche of "the unreliable narrator".  We never really know whether to believe her outrageous claims that someone not only arranged the accidental death of her father, but manged to drive her mother to commit suicide. Or perhaps killed her and made it look like suicide. Despite her beliefs her parents' deaths are not viewed as crimes by anyone,  but only by Jacklin herself. Her hatred of her relatives infects her every interaction. Her desire to avenge her parents' death affects her close relationship with her grandfather who she also believes is being targeted by the same homicidal manic who killed her parents. Everard Crandall, is an irascible old man who seems to be as misanthropic as his granddaughter. But someone still manages to poison him, a botched attempt to kill him that does not go unnoticed by the police or the relentless killer who will try again later in the story.

David, Antoinett'es former fiance, who had an argument with the murder victim the very night she was killed.  It seems that David whose reputation is tainted by his volatile temper had a prime motive and all eyes turn to him as suspect number one.  Was Jacklin protecting him with her monkey business at the scene of the crime?  Further complicating the case is that fact that Jacklin has an obsessive love for her cousin, Ward, who was training to become a doctor in Germany but was forced to return to the US in 1939 when the war broke out. She dreams of marrying him, and longs to be a Crandall so she get get rid of the odious name Bogart and all the hateful things it reminds her of.

The Crandall household is typical of these GAD fictional homes populated with troubled wealthy people all waiting for an ailing relative to die. The eccentric standout is Aunt Mel, Antoinette's mother. She is a religious zealot obsessed with New Age style movements like the one that celebrates The Great Life Force she is currently proselytizing about. In one of the book's highlights she lets loose with a tirade of invective at Everard accusing him of bringing about her daughter's death and cursing him to die.

Everard's housekeeper Mrs. Wollaston, was at one time his lover and they intended to marry, but the family prevented their union in holy matrimony. Mrs. Wollaston, nevertheless moved into the house to stay by the man she loved and care for him.  But is it possible her love is all a sham and she is actually in love with Everard's money? 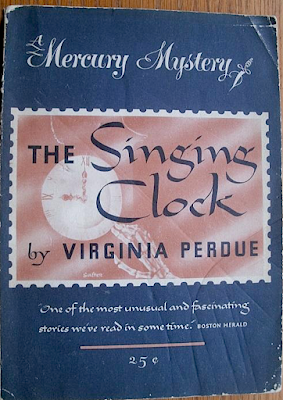 ATMOSPHERE: The title of the book comes from a musical antique grandfather clock that has a prominent place in the home. Throughout the novel Jacklin hears the clock chiming an hour and a portion of the lyrics of "My Grandfather's Clock" run through her head. The song itself lodges in her mind like an earworm, and each time the clock chimes a new hour she hears another line of lyrics singing to her. Often the phrases ironically comment on the action that just occurred or will foreshadow future incidents in the narrative. Perdue uses this motif to add an eerie menace as the murder investigation unfolds. The rhyme includes the line "But it stopped short, never to run again, when the old man died" and Jacklin is fearful that if the clock stops it's tune or stops its incessant ticking Everard Crandall will in fact drop dead. She is determined to save him and is on constant watch as people continually enter and exit his bedroom where he spends much of his time.

INNOVATIONS: I thought this was going to be a suspenseful inverted crime novel and that Jacklin was guilty from the start on page one when we follow her destroying evidence and covering up the murder. But The Singing Clock (1941) is in fact a legitimate whodunnit, an ingenious blend of psychological suspense and detection. Filled with shifts in tone, surprise revelations, astonishing secrets and some transgressive touches like marijuana addiction and borderline incestuous love, The Singing Clock is one of the most remarkable crime novels to be published by Doubleday's Crime Club and a minor masterpiece from Virginia Perdue, a sorely underappreciated American crime fiction writer. The last chapter of this book is bonechilling and genuinely thrilling with Perdue's final unexpected shocking revelation. All that preceded suddenly shifts, characters are seen in a new blindingly altered light, and the story all makes perfect sense. The last few paragraphs are literally bloodcurdling with a scene reminiscent of the violent movies of Quentin Tarantino and the nightmarish tales of Cornell Woolrich and Robert Bloch. For me the final chapter of The Singing Clock is utterly ingenious and makes this book a breathtaking pioneering novel of misdirection in crime fiction. I was both impressed and astonished, a rare reaction these days. 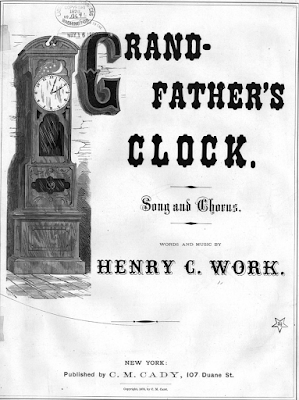 THINGS I LEARNED:  I remember "My Grandfather's Clock" as a nursery rhyme from my childhood. My younger brother and I had it on a kid's record and we used to listen to it over and over as we did with the many odd songs in our large record collection. But apparently it's actually a folk tune that dates to the post Civil War era. Written and composed by Henry C. Work the song was published in 1876. Work is also the composer of a march that memorialized Sherman's invasion of Savanaah called "Marching Through Georgia."

According to a Wikipedia article Henry C. Work wrote a sequel to the song in which the narrator "laments the fate of the no-longer-functioning grandfather clock – it was sold to a junk dealer, who sold its parts for scrap and its case for kindling."

A lyric line from the song inspired "Ninety Years without Slumbering" in the classic TV series The Twilight Zone. Similar to what Jacklin believes in Perdue's novel in the TV show Ed Wynn stars as a man who fears his life will end when his antique clock stops ticking.

For those unfamiliar with the song "My Grandfather's Clock" you can hear Johnny Cash do his own rendition. It's the only one I can listen to now amid the sea of annoying kid's versions.

QUOTES:  "Don't think you can get out of it so easily! You've gone too far, Everard Crandall.  Your wickedness and cruelty have offended against the Great Life Stream!" Jacklin felt a mad desire to laugh. At the same time there was a prickling along her spine. It was only a part of Aunt Mel's latest religious fad. Nevertheless, it was rather horrible.

"Nobody can call his soul his own. Not so long as [Everard's] alive."

There was an air of vigorous health about [Aunt Sarah], a country air, as if she were made of good rich soil instead of ordinary blood and nerves.

And I can't resist adding this one in our days of mask phobia and pandemic viruses:

...the other man gave a harsh laugh which ended in a fit of coughing. He really had a bad cold, Jacklin thought with distaste. Why didn't they stay at home when they were sick. It wasn't fair to go around snuffling and coughing and infecting other people.
Posted by J F Norris at 1:31 PM