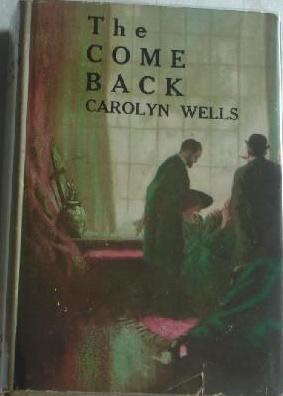 It's October, the season of of black cat and witch inflatables on front lawns, jack-o'-lanterns on front porches and pumpkin spice in everything. October and especially Halloween will be different in this age of the COVID pandemic. Maybe there will be fewer jack-o'-lanterns on front porches and definitely fewer children trick-or-treating door-to-door but that doesn't mean we can't still keep the Halloween spirit alive on our vintage mystery blogs. Curtis Evans of “The Passing Tramp” proposed a "Friday Fright Night" meme for the entire month in which we will celebrate all things spooky, eerie and perhaps even terrifying. Right up my alley, friends! I jumped on board in an instant. Without further ado here is this week's contribution...one day late.

The Come Back (1921) is one of the books in my favorite short series from the indefatigable Carolyn Wells. Her most interesting books are those that feature her detective Pennington Wise and his enigmatic, quasi-psychic assistant Zizi. In each of the Penny Wise books this detective duo faces apparently supernatural happenings while Wells presents her murder mystery plot. Often the ghosts, haunted rooms and apparitions turn out to be rationalized.  I have previously reviewed two books in the series: The Room with the Tassels and The Man Who Fell through the Earth.  The Come Back is the fourth book in the eight book series and deals with spiritualism (a favorite topic of early 20th century mystery writers and a blog topic worthy of a post all its own) and the ghost of a dearly departed relative.

Like many of Well's better written books the plot is intricately complex. The story begins with the tale of three friends who go to Labrador in Canada on a hiking and camping trip and fall victim to severe snowstorm. One of the three, Peter Crane, is separated from the group and cannot be found afterward. When months pass and no word is heard from Peter his family and friends give him up as lost and presumed dead. An attempt to find his body when the snow melts in spring turns up nothing. Essentially Peter Crane has vanished.

Peter's mother Helen is a devout believer in spiritism. Peter's fiancée has an affinity with the Ouija board and the two women begin experiments in contacting Peter. When they start receiving messages from Peter via Ouija communication Helen Crane aches to find out exactly what happened to her son on that trip.

Of course there are skeptics and doubters. Christopher "Kit" Shelby, one of Peter's friends who survived the disastrous camping trip, loathes "spook idiots" and tries his best to warns the Crane family and Carly, Peter's fiancee, against accepting the messages from Peter as genuine "words from the beyond world." Julia Crane is Peter's sister and she resents Carly's introduction of the Ouija board into her house, dredging up supernatural nonsense, and making her parents into superstitious obsessives. Gilbert Blair, the third member of the camping trip and other survivor, is also suspicious of the spirit messages. Still, he makes his move on Carly now that she is apparently available for other men.  We know that he expressed an interest in her during an intimate conversation he had with Peter back in the camping trip section of the book.

Meanwhile, Benjamin Crane at the suggestion of a friend involved in the Society of Psychic Research visits the renowned medium Madame Parlato. He wants the help of an expert to prove that Peter's messages are real. She impresses him immediately when she contacts Peter and reveals his nickname "Peter Boots" known only to immediate family members, and details of how he died freezing to death in the snowstorm. How could she know any of this with no time to do any research other than hearing the stories from Peter's own ghostly lips?  Crane continues to visit the medium and becomes as devout in spiritism as his wife. He writes a book about his experiences, it becomes a huge bestseller and revives a nationwide interest in spiritism.

The plot thickens when Gilbert Blair is poisoned in an impossible crime situation. This may or not be related to an architectural prize that Blair was competing for with his jealous architect/illustrator roommate McClellan Thorpe. Blair had recently accused his roommate of stealing ideas. Perhaps someone in Madame Parlato's close circle of friends killed Gilbert because he was close to exposing her as a fraud.  Or... Is Peter's ghost seeking revenge?  Or --even more miraculous -- is Peter still alive and out for retribution for those he feels abandoned him months ago in Labrador?

The book is filled with all sorts of seance sequences, and the kind of spook busting detective work that is the hallmark of early 20th century mystery novels involving mediums and contact with the dead. The characters who disbelieve the supernatural elements, Kit and Julia are intent on exposing Madame Parlato as a fraud.  At one of the seances a tobacco pouch with Peter's initials materializes. Mr Crane begins to suspect that Peter is alive and hires a private detective. This is where Penny Wise and Zizi enter the book (very late in the story as per usual with Wells). Oddly, Wise himself does very little in this story.  It is Zizi and Julia who are the detectives and they do some admirable sleuthing.

The overall mystery is not difficult to figure out and all supernatural elements, of course, are in the end rationalized and the mediums exposed as frauds. But that doesn't take away from its genuinely entertaining story. Many unusual twists and complications enliven the story and make for some page turning excitement. There is a mysterious man named John Harrison, a reporter named Douglas who shows up at the Crane house asking prying questions, a movie called Labrador Luck that becomes all the rage and, in a reverse of most spook-buster mysteries, a blackmail scheme that involves enlisting the help of Madame Parlato to entrap the murderer. 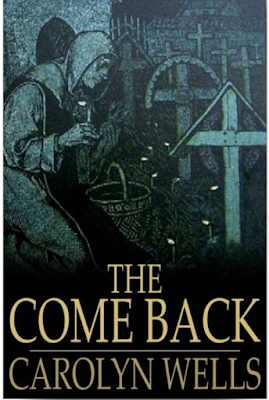 Zizi is fast becoming one of my favorite female sleuths in early American 20th century mystery fiction.  She has intelligence, sarcastic humor, spunk and a fertile imagination. She often resorts to chicanery and con artistry with her boss in order to unmask the villains and miscreants in the books in which she appears. I highly recommend investigating these little known books. There are the best of Wells' early mystery writing career and do not infuriate the reader with the kinds of fantastical and improbable murders that arise from ludicrous motives in her later books of the 1930s and '40s.

Like many of Carolyn Wells' early novels The Come Back is in the public domain. It appeared at the Project Gutenberg over a decade ago and as a result has been pirated by profiteering "reprint publishers" who download the entire novel and repackage it under their "publishing name." So you have myriad editions to choose from. You can buy a pirated copy from about ten different repackagers of free content or download the book for free from Project Gutenberg.  Local libraries may have a copy on their shelves. A few actual used copies of the 1921 editions are out there for sale as well, including an A.L. Burt reprint in a beautifully intact and colorful DJ.

For more ghosts, monsters and things that go bump in the night visit Cross Examining Crime, My Reader's Block, The Passing Tramp and Clothes in Books.  And tune in next week for more Vintage Horrors!