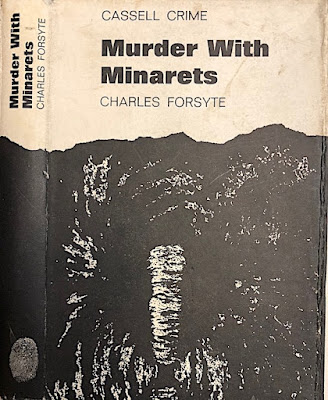 THE STORY:  Someone is killing the diplomatic staff in the housing complex for the British Embassy in Ankara. Two people have been found dead in their bathrooms, one seemingly of a heart attack and the other electrocuted. In both cases the bathrooms were locked and no one entered the apartment. Were they accidents as the police insist they were? Knowing full well the Turkish police will never pursue these suspicious deaths of foreigners Jan Duquesne, wife of First Secretary & Head of Chancery Stephen Duquesne, and her sister Gina turn amateur sleuths to find proof that both people were murdered. They uncover an ugly blackmail scheme, chicanery involving classified documents and endanger themselves in the process.

THE CHARACTERS: I got the feeling that the female half of the writing duo known as "Charles Forsyte" was in charge of this book. The story has both claustrophobic and heavily domestic atmosphere. We get a lot of catty gossip amongst the wives of the various under-secretaries, commissioners and typists working for H.E. (His Excellency, aka the Ambassador). First we meet Barbara "Ba" Hadley, brassy and opinionated wife with two rascally sons who spends much of the first chapter delivering the novel's exposition in a mix of off color humor and playful devotion to her husband Tom, Her Majesty's Consul in Ankara. They are preparing to go to a dinner party (one of several in the book) and can't get off the topic of Magda, another diplomat's wife who recently had a run-in with Tom about the size of her apartment and made outrageous demands to get a bigger place -- or else.

Magda, a foul tempered vicious women, is another one of those characters who has murder victim written all over her. She is a symbol of superficial sophistication, whose love of expensive clothes and her own self-importance colors her every thought and deed. When slighted she strikes back maliciously spreading rumors about infidelity, suggesting to artist Doune that her husband makes too many frequent visits to the Hadleys' apartment when Tom is never home. Is it any wonder that Magda is the first person to be found dead in her bathtub?

The focus always seems to be on the women in this story though it is the men who are doing the work at the embassy. Dinner parties and social functions make up most of the action allowing for several scenes with large groups and unusual dynamics in the character relationships. So much of the book's first half is devoted to this interplay that I wondered where the mystery would enter the story. That happens after Magda's death and with the entrance of a visiting archaeologist, Christopher Milner-Browne, the brother of Peter yet another Under-secretary at the embassy.  Both brothers have a bitter sense of humor, almost reveling in their withering glances and caustic humor.  Jan, initially turned off by Christopher's patronizing manner, will learn it is the archeologist's aloof and ever cautious demeanor that leads him to seeing the truth within this claustrophobic microcosm of small-minded diplomats. It always seems to be the outsider who can see through the pretenses.

Other noteworthy people in the cast of Murder with Minarets (1968) include Paul Tranter, Magda's husband who has been acting too secretively of late; Francis Allardcye, Doune's vain and oversexed husband who claims to be a professional violinist but is only a big fish in a small pond relegated to teaching music classes at the Turkish Conservatoire; Laura O'Halloran who has "ear-witness" evidence on the night of second death that implicates a man and a woman; Gina who begrudgingly steps in as Jan's Archie Goodwin doing much of the dangerous legwork; and a couple of Turkish servants whose domestic activities the reader would do well to pay close attention.

INNOVATIONS:  I'm a on a roll with digging up unusual detective novels with complicated or bizarre murder methods. The ingenious method of dispatching the victims in their bathtubs is reminiscent of the kind of thing Christianna Brand would dream up. It lacks the technical expertise of John Rhode, the murder means maven of the Golden Age. Instead, Forsyte's method signals the work of an evil domestic handyman. Both Gina and Christopher manage to uncover clues that lead to the revelation of how the deaths were accomplished. Once again, this key moment happens during a cocktail party. Who knew that diplomats spent so much time throwing parties for each other?

Some of the best clue planting is done in casual conversation reminding me again of Brand and also Dorothy Bowers and Helen McCloy. It happens so often that every time I came across something seemingly throwaway and innocuous -- an ashtray being unnecessarily cleared away from a table to make way for the tea things -- I immediately wrote it down. Four of those statements proved to be genuine clues to discovering who the guilty party is. Gold stars for clue planting to Forsyte for this book! For a long time this didn't seem like a detective novel at all. In the end, however, Murder with Minarets proves to be a brilliantly constructed plot with quite a bit of misdirection. 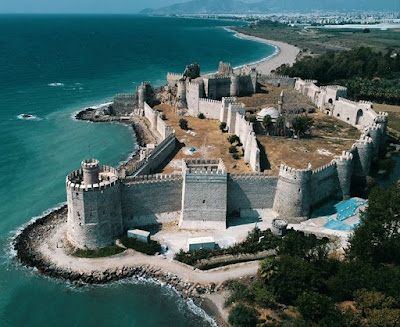 THINGS I LEARNED:  Loads of colorful Turkish locations, some insight into Turkish culture, satiric commentary on the indifferent 1960s era Turkish police all added to the enjoyment of this novel's exotic setting. A picnic that takes place in a seaside park with a view of a "Crusader's castle" (as Jan calls it) was described so evocatively it made me long to see it in person.  So I looked up images online and lingered over the photos of Crusader castles on Turkey's coastline. There's one above for you to enjoy. 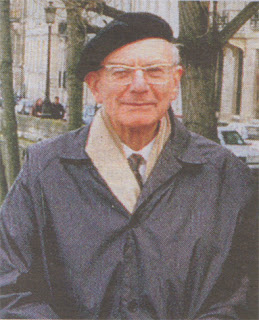 THE AUTHOR: "Charles Forsyte" is the pen name used by husband and wife writing team Gordon Philo and Vicki Galsworthy. Philo was not only a mystery writer but a former spy, diplomat in the Far East, and an amateur magician and sleight of hand practitioner. I am assuming that much of the flavor of the domestic life of a diplomat in Murder with Minarets is drawn on his own experiences as diplomat in Turkey between 1954 and 1958. I will not venture to guess if any of the characters was actually based on any of his colleagues or friends. His wife Vicki is a distant relation of writer John Galsworthy whose many novels that make up "The Forsyte Saga" gave the couple their pseudonym.

EASY TO FIND? There are a handful of copies of Murder with Minarets offered for sale by online booksellers. The book, the last of the four mysteries by Philo & Galsworthy, was published only in the UK and had no paperback reprint that I know of. Copies of the "Cassel Crime" 1968 first edition show up as well as a 1990 reprint in large print from Ulverscroft. More copies of the large print edition can most likely be found in local libraries in the UK and US.
Posted by J F Norris at 12:14 AM