FFB: The Footprints on the Ceiling - Clayton Rawson 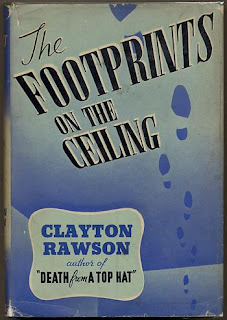 In preparation for my upcoming "In GAD We Trust" podcast with JJ (of The Invisible Event) on stage magic, theatrical devices and misdirection in GAD fiction I thought I'd finish up the series of Great Merlini mysteries which shamefully have been on my shelves for over twenty years and still remain unread. I did not get along with Death from a Top Hat (1938) when I read it decades ago, but I did very much enjoy all of the Don Diavolo stories Rawson wrote as "Stuart Towne" which I gobbled up within days and wished there were more. Since I was approaching this read from an older and wiser perspective and also because I was specifically looking at tricks and misdirection I did enjoy The Footprints on the Ceiling (1939) almost as much as the Don Diavolo novellas. There are still elements of the Great Merlini novels that irritate the hell out of me and I'll talk about those in the podcast, but here's my basic impression of the book along with "Things I Learned" (as you will with any of Rawson's mystery stories and novels) that seem to make up about 75% of the book.

This is one of the many mysteries between 1900 and 1940 dealing with spiritualism debunking and the trickery and gadgetry that was (and probably still is) employed by fake mediums and phony psychics.  Two characters from Death from a Top Hat re-appear in Footprints on the Ceiling in an altogether different light and play much larger roles in the novel. 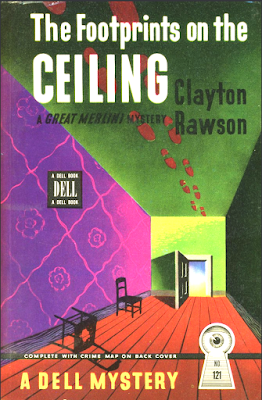 Merlini is going to host a new radio show on NBC called "The Ghost Hour" and his pal Colonel Watrous asks him to come to Skelton Island where their former associate from Death from a Top Hat Madame Eva Rappourt is hosting a seance for agoraphobic Linda Skelton obsessed with psychic phenomena and the drug induced trances she thinks will help cure her of her mental illness. Watrous is beginning to think that Madame Rappourt, whose powers he previously extolled in a book called Modern Mediums, is in fact one of the most clever frauds he ever encountered. Merlini and his playwright friend Ross Harte (our narrator) travel to Skelton Island armed with skepticism and infrared cameras hoping to catch the medium in the act of an elaborate charade and expose her with the photographs they plan to take while the seance is conducted in the dark.

Of course something goes wrong the minute they arrive on the island.  On route to the seance Merlini tells Harte about the legend of a pirate who supposedly haunts the island.  The two men see lights in an abandoned house on the north end of the island and rush to investigate. There they find the rigid dead body of Linda Skelton who has apparently been poisoned with cyanide. How and why did an agoraphobic who never left the main house end up so far away? And who killed her?

The story is one of the most complicated plots I've read of any era, let alone the Golden Age.  It's filled to the brim with baffling incidents that all seem to be impossible. A fire that no one could have started, the transporting of Linda's body to the haunted house, a bullet that seems to have traveled around a corner at 45 degree angle, a seemingly encoded message found on a typewriter ribbon, a nude body found in a locked hotel room, and of course the titular marks found on the ceiling at the scene of Linda Skelton's death. Magic, misdirection, acrobatics and clever gadgets all play a part in the solution of the various mysteries and murders. 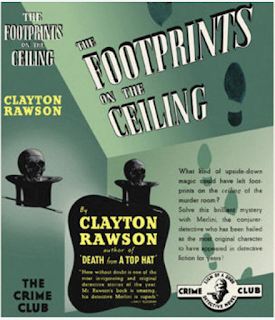 There are many mini-lectures in this murder mystery reminding me of one of the issues I had with Death from a Top Hat. Rawson is one of the writers who likes to fill his books with arcane information and minutiae and go on at length. It was like reading a 1930s version of an X-Files script. But at least in the TV show those lectures were brief. We get overly detailed lectures on caisson disease ("the bends") and the precautions needed in decompression to prevent that condition; the diagnosis, causes and treatment of agoraphobia; three pages listing shipwrecks and lost treasures and the 1939 dollar values placed on those treasures ranging between 8 to 100 million; and three other things I'll discuss in the Things I Learned section. Had these lengthy lectures been condensed or removed the book could easily be 25 - 75 pages shorter. OH! and there are Van Dine-like footnotes, too!

The cast of characters consists of so many rascals, evidence tinkerers, vengeful would-be murderers, that at one point it almost seems like a parody of Murder on the Orient Express (1934). As a consequence of the convoluted shenanigans of this shifty devious group, in addition to unmasking the somewhat surprising murderer, everyone is arrested for some offense and hauled away by the police. The many pronouncements of this teeming mass of miscreants and their misdeeds makes for a long trawl through the final chapters consisting of three -- count 'em three -- summing-up explanations unnecessarily peppered with tangential commentary and sarcastic quips from Merlini. It goes on interminably and the many readers will no doubt find themselves agreeing with the impatient and irascible Inspector Gavigan who keeps demanding that Merlini get to the point faster.

THINGS I LEARNED:  Simon Lake (1866-1945) was a mechanical engineer and inventor who specialized in designing and building submarines and salvage equipment for the burgeoning underwater construction industry and salvage and recovery businesses.  He is mentioned in passing and provides a major clue to a fine detail in a portion of the solution. For more on Lake's ingenious work visit this website.

This is more of a refresher for me rather than something wholly new, but Ross Harte launches into monologue mode in the chapter titled "Thirty Deadly Poisons" with a litany of toxic chemicals. He reminds us that photography is one of the most poisonous professions of the pre-World War 2 era and could prove hazardous to one's health if not fatal.

I learned of an unusual dermatological side effect of the use of silver nitrate in medicine called argyria. It's an irreversible condition in which the silver turns one's skin blue-gray. Merlini talks of the Blue Men (and sometimes women) who suffered from this horror and tells Harte and Dr. Gail many of these people joined circus sideshows in order to make a living and escape shame and embarrassment in "normal" civilization.

Even with the long lectures, the complicated plot and several subplots, and Merlini's insufferable ego and sarcasm it cannot be denied that Rawson has made the book exciting and action filled. The opening chapters read more like an adventure novel than a murder mystery. Footprints on the Ceiling mixes haunted house legends, pirate lore, the search for lost treasure, deep sea diving techniques and new inventions, con artists and fraudulent spiritualism, and circus performers in a dizzying plot of inventive murders and ingenious criminality. Rawson almost succeeds in making his second novel a brilliant addition to American mysteries of the Golden Age. His penchant for show off esoterica so reminiscent of the Philo Vance and Ellery Queen novels and the innumerable instances of shunning the fair play techniques of his colleagues, however, keep this mystery novel from being a true masterpiece. As it stands it can only be thought of as a clever and entertaining diversion.