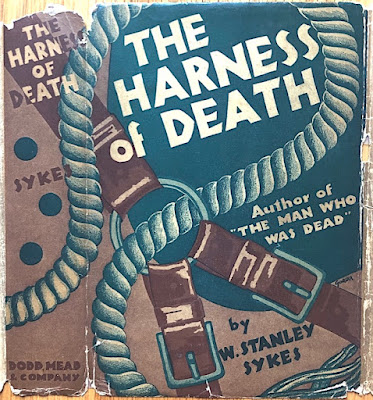 There are mystery writers whose work in their primary field is far more interesting than their dabbling in genre fiction. Then there are those who dabbled whose work is so strong on plotting, character and imaginative use of detective novel motifs they should have kept on writing books for decades. Such is the case of William Stanley Sykes, an anesthesiologist (or anesthetist as they say in the UK) who was a pioneer in his field. His monumental Essays on the First Hundred Years of Anaesthesia, a three volume work, is still held in high regard, mostly for his painstakingly researched history and the evolution and development of treatment methods. But his interest in criminology, ingenious murder methods and the exacting nature of police work in the pre-WW 2 era resulted in only three novels and three solve-them-yourself mysteries. It's a shame we have no more than that small output from him. He had a real flair for the genre. 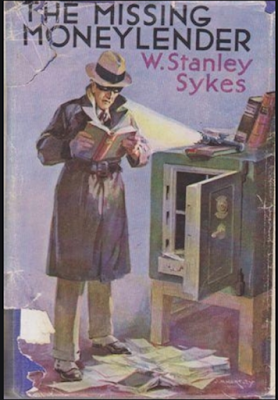 His first novel The Missing Moneylender (1931) was published with the prosaically dull title The Man Who Was Dead in the US. Of his three novels this is the most easily obtainable title for it was reprinted several times by Penguin in paperback editions. ...Moneylender has been reviewed favorably by TomCat at Beneath the Stains of Time and Ron at Vintage Pop Fiction and is examined in a highly opinionated, post-modern approach that is completely ignorant of detective fiction conventions at A Penguin a Week. His second The Harness of Death (1932) is the focus here. It's the only Sykes mystery novel I own and one of two remaining works not reviewed anywhere in the blogosphere.

Unlike his debut mystery novel Sykes decided to make The Harness of Death an inverted mystery novel. The first chapter we watch a blackmail scheme go terribly wrong. The victim Edgar Marston turns on his tormentor, the snide and weasely owner of Reinhold Metal Works and foundry. Even though the blackmailer is holding his victim at bay with a revolver Marston manages to turn the tables, disarm Reinhold and bash in his brains. He then disposes of the body in the metalwork's foundry furnace.

Chapter Two follows in a different setting which interestingly occurs almost simultaneously as the action in the preceding chapter. The attendant in charge of the stored luggage at Southbourne Station notices blood seeping out of a trunk, opens it and discovers a "disarticulated leg." He is horrified and immediately calls the police. The police set up a trap for the owner of the trunk. When he shows up to claim his property the police learn there was a terrible misunderstanding. Dr. Hemsworth, the owner of the trunk, tells them: "I don't blame you for arresting me. But the person who owns that leg is very much alive." It seems Hemsworth has a research project and he was allowed to take the leg from a recent amputation at the hospital where he works. He foolishly left the trunk too long at the storage room due to some delays at his job. Now the leg is spoiled and useless for his research. The police find this all hard to believe so they drag the doctor to the station and have a parade of hospital employees come in to verify his identity and story.

These two incidents will eventually link up in the first of several eyebrow raising surprises in a book replete with criminal ingenuity and viciously executed murders. The case is investigated by Sykes' series detective Inspector Dennis Drury and his capable team of policemen and law officials. The foundry is a front for an intricate criminal operation populated with myriad scoundrels and duplicitous employees with secrets in their past. The police wonder why someone didn't bash in Reinhold's brains years ago, he turns out to have made several enemies. Drury is always turning up someone he remembers from his days as a beat cop as he interviews the various employees at the foundry. The final third of the book is taken up with a pursuit at sea as the police track down their quarry and attempt to prevent another murder. Deep sea fishing is described with expert gusto that would have Ernest Hemingway dripping with envy. The climax is heightened by a battle to hook a 200 pound tuna with two men harnessed into a high tech rod and reel and fisherman's chair. Who will do in whom?

Not only is the plot intricate and engaging but Sykes has a talent for making even the most minor characters like Sam Garside, the stowed luggage attendant, fully human. Like George Bellairs who also enjoys giving us micro-biographies of characters who appear on only a few pages, Sykes has fun with filing us in on the quirks and homelife of his supporting cast while often revealing secrets the police will never uncover. Garside spends much of his workday working the contest crossword puzzles in the newspaper longing to strike it rich with the prize money. Wayland Harrison, Reinhold's crooked partner, likes to cheat at golf. Marston is embezzling funds from Reinhold to help finance his expensive, sometimes dangerous, hobby of tuna fishing. Black humor and untold criminality add satiric spice and enliven his detective plot.

The life and medical career of William Stanley Sykes (1894-1961) has been written about extensively all over the internet and I'm not going to reiterate any of it. The most detailed and concise summation is his obituary that appeared in the British Journal of Anesthesia.  I was fortunate to find two portraits of him at the National Portrait Gallery's vast database. So there he is over on the left as he appeared in 1939, seven years after the publication of The Harness of Death. As for his fiction writing I have lots to report.

Sykes' third and last detective novel is The Ray of Doom (1935) which incorporates elements of science fiction was published only in the UK by Hodder & Stoughton. This is the rarest of his detective novels. The Worldcat.org database tells me that there are only 9 copies held in a mix of US, Canadian, UK and Australian libraries. Currently, two copies are offered for a sale from online dealers, but they both appear to be battered ex-library books. Pass! No one is getting $129 (plus postage) from me for a dirty, beat up book no matter how rare it is.

He contributed three mini short stories that were solve-them-yourself mysteries for Hush, edited by Edgar Wallace and created by William Collins & Company as a way to help market the work of their bestselling mystery writers who were part of Collins Crime Club. It may have been a perk for subscribers who signed up for The Detective Story Club, a short-lived imprint & subscriber book club from Collins that reprinted in cheap hardback format several popular detective fiction books and thrillers from the 1920s and earlier. Three of Agatha Christie's Jane Marple short stories that would eventually appear in The 13 Problems (1932) -- The Tuesday Night Murders in the US -- as well as works by Sydney Horler, the Coles, and J.S. Fletcher all appeared in Hush alongside Sykes' puzzles. The magazine ran from June 1930 to June 1931 and had only 13 issues. Subtitled "Problems in Detection" Sykes' only short stories as such are "How Was the Knife Thrown? (Jan 1931), "The Dangerous Safe" (Feb 1931), and "The Locked Room" (March 1931).
Posted by J F Norris at 12:00 AM