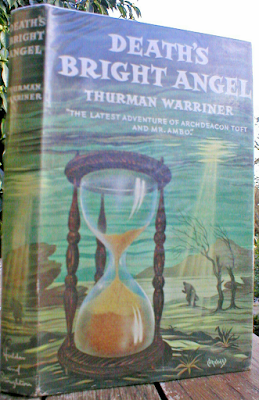 It may be that Death's bright Angel,
Will speak in that chord again;
It may be that only in Heav'n,
I shall hear that grand Amen.

-- "The Lost Chord" by Adelaide A. Proctor
Set to music by Sir Arthur Sullivan in 1877

THE STORY: Is it possible for love to cure a terminal illness? Julia Lindsey begins to believe that she has thee unusual power and is frightened by it. Andrew Quayne reveals to Julia he has cancer due to radioactivity exposure at his last job in a nuclear research facility in America. He suffers a near fatal collapse after a grueling hike in the country and Julia rushes to find help. Her fiance is rescued, taken to her home where he manages to quickly recuperate each time she holds him in her arms or touches him. Archdeacon Toft and Mr. Ambo, who helped Julia save Andrew's life, take up residence in Julia's home where she lives with her sullen and often angry artist brother Elton. While caring for Andrew the four learn that he is not suffering from radioactive exposure and cancer but instead is being poisoned by his greedy relatives who want Andrew's inheritance and get control of the family business. At least that is Andrew's belief. His relatives behavior to him, secretive and acrimonious, only serves to underscore the theory. The mystery of Andrew's illness is coupled with the strangling murder of Elton's former girlfriend, the well-liked local barmaid May Varley. It is up to Archdeacon Toft, Mr Ambo and their private detective associate John Scotter to rout out the evil, expose the murderer and end a literal reign of terror in the village of Bidderley.

THE CHARACTERS: Warriner's trio of detectives have never been more wise and affable than in Death's Bright Angel (1956). Toft pontificates and blusters like an older, wiser and more sedate version of Henry Merrivale. Mr. Ambo, in his seventies in this outing, is the kind of dear old gentleman everyone wants as his grandfather. We learn more about his past in his intimate conversations with Julia. Ambo's share of insightful observations provide clarity for the characters as they learn the differences between personality disorders, temperament and stubbornness, and genuinely evil behavior. When Scotter the 30ish private eye with good common sense and an earthy sense of humor shows up the story kicks into high action mode. Metaphysics give way to sound detection, the two suspects who seem to be very much involved in May's murder at last stop lying and deceiving and there is race to rescue one more of our protagonists from the clutches of a nasty piece of work.

Julia and Andrew provide a sweet love story that thankfully never descends into the nadir of sentimental drivel. It is Julia's fear of her genuine goodness that makes the book so fascinating. Her paradoxical dilemma provides for some suspenseful moments as she tries to figure out if it is right for Andrew to be so selfishly cared for or if she is doing him more harm than good. Her miraculous touch terrifies her and she truly believes that she might literally kill him with kindness. Her brother, Elton, is the antithesis of Julia. And he provides much frustration for both the detective heroes and the reader. 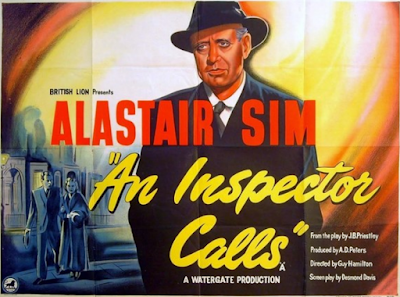 Elton is an arrogant creative type we find so often in crime fiction. He spends much of his time painting portraits, belittling his own talent, compromising his true art for commercial work for magazines and billboards, and denounces everyone and everything with bitter sarcasm. When May comes to him for money to help raise their child Elton's insensitive cruelty and his dismissal of her plight leads to her doom. Everyone in the village think his sullen moods and anger make him the number one suspect of May's strangling murder. Elton fervently denies he had anything to do with her death but a painting he gave her prior to her leaving his house is found in the fields near her body and it's nearly destroyed. Elton is hiding something and refuses to cooperate with both police and the trio of amateurs. Only when Scotter shows up and practically threatens him with not only arrest but a sound beating does Elton's seething anger explode. Elton's confesion is reminiscent of the climax of An Inspector Calls as he accuses everyone in the room of being responsible for May's murder. As he unleashes his rage he melodramatically reveals a closely guarded secret that simultaneously serves up one of the most gasp inducing surprises in the book.

Andrew's two sisters, cousin and cousin-in-law round out the cast. A more despicable trio of family members could not be found outside of a Ruth Rendell or Minette Walters crime novel. Gilbert Callas is a ne'er-do'well twit who speaks like he escaped from a P.G. Wodehouse farce with all his "Jolly good chaps" and "What ho, mate!" He is ineffectual, foolish and completely lacking in business sense. Phoebe Atwyn Quayne, the elder sister as one might imagine is as pretentious as her name -- a haughty snob who writes romance novels that despite the godawful purple prose (it's read aloud at one point) sell incredibly well and provide her with a lucrative income and entitled airs. The younger sister Tina is something of a cipher. Emaciatingly thin in contrast to her portly sister she is portrayed as a sinister woman who dresses all in black, speaks tersely and reticently, and sneers an awful lot. The only saving grace is Gilbert's wife, Mary, who is described by Mr. Ambo "as good as her very fine name". Mary is Julia's one friend never without a kind word or a pleasing laugh to lighten a story that threatens to give in to portentous anguish.

INNOVATIONS: Warriner writes what I like to call metaphysical detective novels. Archdeacon Toft is always bringing up the topic of evil in everyday life. The villains in these novels are tainted with unrepentant amorality. Refreshingly, Warriner rejects the post-modern idea of the banality of evil. His villains are some of the most fascinating people in his novels for one never suspects them capable of the crimes described. His use of misdirection is comparable to the greats of the Golden Age and there are two brilliant uses of misdirection in Death’s Bright Angel. He certainly fooled me -- both times! In each of his mystery novels Warriner cleverly builds up his case against several suspects, providing motive and opportunity for all, but always manages to reveal the true culprit in an eleventh surprise. This is perhaps one of the best examples of the least likely character being revealed as the killer. It is truly unexpected and sort of blew me away.

The talk of evil is contrasted and amplified by the unusual plot device of Julia's supposed paranormal gift of healing Andrew's cancer. This leads to a discussion of the healing power of love that is never handled in a treacly or New Age way, but with sensitivity and intelligence. Just when it all seems to be a bit too much, a tale bordering on metaphysics and supernatural, Warriner explains all of the scheming and truly evil actions as the work of a talented and thoroughly amoral villain who not only strangles but kills with the power of suggestion.

QUOTES: Toft's retort when Elton in one of his many stubborn fits protests he is innocent until proven guilty: "A man can be guilty of monumental idiocy even if he's innocent of murder."

"Something's going to happen. I can feel it. I believe in evil as a spiritual force capable of incarnation, and I can smell its birth."

A conversation about Andrew's cancer raises thoughts on Church of England dogma and the dangers of splitting atoms:  "No children!" Elton repeated. "Oh God, that's funny! [...] it seems odd to hear a dignitary of the Church say that. Especially when one considers that the chief purpose of marriage, according to the Prayer Book, is the procreation of children."
"We probably need a revised version of the Prayer Book even more than of the Bible," the Archdeacon retorted. "Blame the times, not the Church. In Tudor days it would scarcely be anticipated that mankind would be playing with the dust of God used to build the universe."

Scotter to Elton: "Brother, they'll be making a full-page block of that picture for next Sunday's editions. Accused man's blond girlfriend. Every hag under sixty's beautiful to Fleet Street and every reporter carries a bottle of hair dye in his pocket. Circulation goes up ten thousand every time blonde gets set up in type."

THINGS I LEARNED: Archdeacon Toft describes Gilbert's "What ho" twit talk as "wizard prang." I had no idea what this meant. But as usual the internet delivereth! During WW2 the RAF pilots developed a huge slang vocabulary. Wizard prang is one of the most overused phrases of the era. The definition I found online here is "A bombing mission that resulted in a large amount of destruction." Further research revealed that prang which RAF pilots used to mean "crash" comes from the Malay word for "war". However, the correct Malay spelling is perang. Using "wizard" as a modifier was a way of making any slang term a superlative.
Posted by J F Norris at 12:26 AM