THE STORY: Con artist and thief Victor Clyde (aka Francis Edwards) sees in Jessie Hewitt an easy mark.  He spots her in a two bit Hollywood cafeteria frequented by movie extras and she is crying over a letter she received. He turns on the charm and within minutes learns her father is dying, she is out of a job and down to her last couple of dollars. Vic is trying to flee California after his latest job which left a man dead from a mortal wound administered by the butt of Vic's pistol. So he wheels and deals and cajoles and flatters Jessie. He convinces her to leave the state with him and he'll take her to visit her dying father. Along the way they get married! But who exactly is conning who here? And will the police catch up with Vic and stop his crime spree by the time he ends up on the East Coast?

THE CHARACTERS: Despite the title Tears for Jessie Hewitt (1958) is really about Vic Clyde and his life as a professional burglar. He has a very specific M.O. He scopes out marks while at racetracks and casinos. He pegs the big winners, follows them to their home and then makes a study of their habits. The next big win at a racetrack Vic makes sure he is in the mark's house in his unusual get-up of industrial coveralls and --absurdly-- a clown Halloween mask. He threatens them with a gun then knocks them out if they refuse to hand over the money.  This has worked swell for him until one of his older marks suffered a severe head wound from being coshed with the gun butt. He later dies in a hospital and that makes Vic guilty of a felony -- murder during the commission of a robbery.

In Jessie he finds his escape and also a possible victim anticipating that she will inherit her father's money from a successful hardware business along with his house and farmland. But when Jessie discovers Vic's burglar outfit and his gun she starts asking a lot of questions. She remembers the news stories of the Band-Aid Burglar too, a name the reporters and police gave to Vic when it was discovered that he used Band-Aids to cover his fingertips rather than wearing gloves which he found made his burglary activity too clumsy. To her amazement Vic confesses everything. Oddly, this draws them closer. Jessie loves him for his honesty and is surprised that she admires him for robbing only from people who win their money from gambling. Both of them rationalize that Vic is not taking anything from his marks that is rightly theirs. Vic is an immense egotist, vain in the extreme and he gets off on her devotion. Plus he needs her home as his haven. He inveigles Jessie into joining him on a racetrack caper. And she loves the excitement. One caper leads to another and soon they are married partners in crime. But the police are hot on Vic's trail for the murder of the man in California. He still sticks to his M.O. in his new digs and this bad decision coupled with the accidental loss of one of his Band-Aids at the scene of a crime will be his undoing.

Jessie has a troubled past that will color and shape everything she does. She tells Vic of that her father was an abusive and sadistic man and still suffers from the aftermath of that abuse. Living in a small town like Cawfrey didn't help matters either where ideal gossip is the mainstay. She couldn't hide her bruises or scars and everyone in town knew that her homelife must have been hell. She sees in Vic her redeemer. His charm, his honesty, his apparent love for her are a godsend and she'll do anything to protect him. This will be her undoing as well. The title is a huge hint that a happy life is not in Jessie's future.

Lt. Lance Wiley is Vic's adversary in the novel. His fellow cops like to call him "Wily Wiley" for he has an unusual method to crime solving. He can think like a criminal and he playacts by imagining himself to be his targeted suspect. "Let's jump into Benson's skin for minute," he'll suggest to his sergeant and soon he's launching into a recreation "entering his mind, registering what he would do or not do in any given circumstances." Wiley uses this technique to determine how Vic behaves and thinks while committing his thefts. One thing Wiley is certain of: Vic is not as smart as he thinks he is and that Vic's immense ego is his greatest weakness.

Vic chose as one of his racetrack marks a famous popular composer who is the first victim who isn't threatened by his gun. A struggle takes place in the composer's apartment when Vic tries to rob him of a $10,000 racetrack prize, Vic is struck in the face and his pulls the trigger on his gun. It's his first deliberate murder. The composer's death makes it two murders on his future rap sheet. And the city will be out for blood. Killing a nationally known celebrity with a huge TV following was Vic's biggest mistake.

When Lance Wiley is asked to take part in a televised memorial for the composer he uses the opportunity to talk about the suspect who he assures the public will soon be apprehended. He knows this because the criminal they are tracking is stupid,using that very word. When Vic, ever the vain man eager to hear what the police think of him, hears Wiley call him stupid he transforms from charming con men into raging beast. He plans to strike back at the cop and show him just how clever he really is. That's when Tears for Jessie Hewitt takes a decidedly strange detour morphing into a novel of personal revenge combined with a cat and mouse game between Lt. Wiley and Vic. There won't be many winners in this game.

INNOVATIONS: It was a refreshing change to read a crime novel in which a policeman has a well adjusted and happy life. No abusive alcoholics recovering from a lifetime of unhappy marriages on display here. Lance has a loving wife Meg with a lively sense of humor, and a precocious yet endearing 8 year-old son named Sandy.  Sandy's obsession with spelling complicated words is introduced in an interesting prologue and will come into play later in the book to help his father solve a mystery.

The novel is modeled on inverted detective novels since we know exactly how the crimes are committed and we follow the criminal's point of view for most of the narrative. However the book is not without a smattering of genuine detective work. Sherry's use of the Band-Aid clue is probably the most inventive retro clue in the story recalling similar odd yet innovative clues found in the best detective novels of Golden Age.

QUOTES:   Just so I don't ignore the title character (who comes into her own in the final third of the novel), here are key moments that reveal the tragic figure of Jessie Hewitt.

"Yes, I'm sorry for him, Vic. A thing like this could haunt a kid -- darken his whole childhood -- I know what it's like to shiver with fear --and be too little to fight back."

...she was still the "crazy mixed-up kid" who had to be controlled and managed and guided carefully wherever he decided to lead.

Her gratitude, plus her physical feeling for him, was a combination guaranteed to muddle a far cooler head than hers. She was like a hot-rodder without brakes, hurtling downhill.

...in the afternoons they went to the races and he was totally unprepared for the comic resultant development: Jessie became a violent horse fan. The crowds, the high stepping thoroughbreds, the colorful jockey silks, and the recurring climax at the finish of each race intoxicated her.

THINGS I LEARNED: In addition to wearing Band-Aids on his fingers while carrying out his robberies Vic chooses to make them less noticeable by covering them up with cosmetics. He choose a foundation cream with a rachel color, a term that puzzled me. I fell down a cosmetic rabbit hole in the internet as I learned trivia after trivia about the origins of this shade of make-up. First, for centuries face powder and foundations were made only in three colors; blanche, naturelle, and rachel which are likened to modern day white, pink and cream. Then, rachel (a cream color) apparently gets its name from the 19th century French actress, Élisa Rachel Félix. As I learned from a blog called Cosmetics & Skin: "Rachel was known for her beauty, her clear diction and unexaggerated style of acting making her well suited for a stage with brighter light. Talented and beautiful, she was ideally placed to make the most of the new environment. It is understandable then, that her name might be associated with a beauty product. She was an actress, a beauty, and known throughout Europe." Visit the blog and you too can get a lesson in the history of make-up, French theater, and the marketing of face powders over the decades.

When Vic visits the racetrack for the first time Sherry takes the time to explain the process of parimutuel betting, a system in which bets of a particular type are placed together in a pool and payoff odds are calculated by sharing the pool among all winning bets. The fascinating history of the system (also originating from France) can be learned by visiting the betting site Twin Spires. 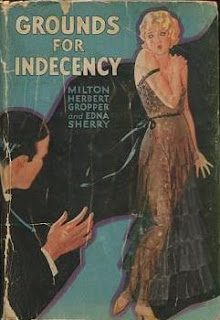 THE AUTHOR: Edna Solomon Sherry (1885-1967) graduated from Hunter College on Staten Island in 1906 and taught literature there for a while before becoming a full time novelist. She had an interesting early writing career that most people know little about. In the late 1920s she began writing fiction in collaboration with Charles K. Harris. Two of their stories with criminous content were published in pulp magazines in 1927 and 1928.

Serendipitously I also uncovered two novels she wrote with Milton Gropper. Is No One Innocent? (1930), a police procedural mystery, is a novelization of a play she wrote with Gropper titled Inspector Kennedy (1929).  Grounds for Indecency (1931), their second book, published by lowbrow Macaulay sounds like a typical sexploitation novel that was a specialty of that publisher. From the jacket copy:

"Nita... brings the treasure of her beauty and puts it in the scales against her father's debt. One man intervenes not only to save her father but to save her from her own self-sacrifice. But she comes to his apartment against his will to make her payment...." 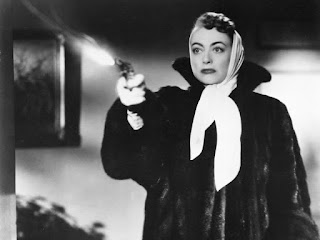 Sherry's first solo crime novel, and arguably her best known work, Sudden Fear (1948) was adapted into the 1952 movie starring Joan Crawford, Jack Palance, and the ever fabulous Gloria Grahame. One of the better movies of the last wave of true noir cinema that came out in the 1950s it was nominated for four Academy Awards but won none of them.

In 1909 Edna married Ernest Sherry, a dentist, who was her husband until his death. Tears for Jessie Hewitt is dedicated "To Ernie, with love."
Posted by J F Norris at 10:38 AM