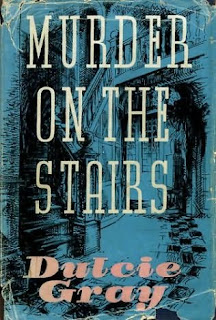 This is my inaugural post for a new feature on people who wrote mysteries who were primarily known for a completely different profession. We'll be looking at mainstream novelists, academics, performers, journalists, and a music magazine editor. To start us off I chose Dulcie Gray, stage, TV and movie actress, who was married to Michael Denison, also an actor with whom she often appeared.

Gray's first mystery novel, Murder on the Stairs (1957) is a homage to the old dark house thrillers and draws on traditional detective novel motifs like a bitter family at each other's throats and action confined to an old family estate. Unlike the novels which obviously inspired her Gray experiments with narrative techniques.

Divided into three separate sections we get the point of view first from an ostensible victim, Mary Howard, who we soon learn has been leading us on in her first person narrative. Part two changes narration to third person and we see everyone’s reactions to Mrs Howard’s seeming paranoia and learn that several people may want her dead. We also discover her husband died under suspicious circumstances.  In part three we have yet one more change in point of view when  Dr. Bradley takes over the story as an amateur detective with the added unusual twist of two people who take turns presenting their solutions to Mrs Howard’s murder.  Murder on the Stairs reminded me most of the work of Christianna Brand whose mystery novels also tend to be populated with embittered families, display a sardonic wit, and contain -- her trademark -- multiple solutions to the mysteries. 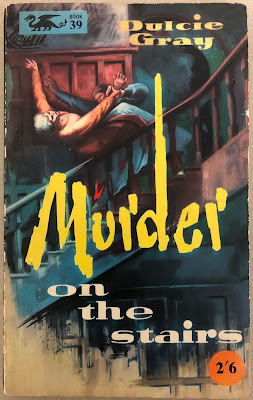 The difference is that Gray aspires to achieve the plotting techniques and sparkling wit of Brand but falls short of the mark. Her dialogue is bitchy and catty reminiscent of the kind of thing that Gray herself must've uttered in many stage melodramas. Her plotting is not as clever and her clueing is weak when it is present. Murder on the Stairs has one intriguing element that made me hope that she was writing a send-up of Murder on the Orient Express. At one point in the second half we discover that three couples (two sets of husband/wife and a duo of female friends) are planning to kill Mrs. Howard. I was hoping that all three couples would pull off each attempt on her life and it would be up to the survivors (and of course the reader) to figure out which murder plan succeeded and who was responsible. However, all hopes were dashed when the murder occurs and it is ineptly pulled off. The cover illustration of the paperback edition I own depicts the crime. The illustration is purposefully misleading but I'll say no more.

I read only one other book -- Epitaph for a Dead Actor (1960), her fourth novel -- but it too suffers from stilted dialogue (especially when the characters express their love for one another) and plot elements better executed in the hands of more accomplished writers. I plodded on through the tiresome opening which focused on Louise Ferrar and her relationships with a TV director (called a producer during this era) and her current paramour. I managed to make it to the murder of a loathsome womanizing actor who is playing the male lead in a vehicle produced and written for Louise to star in. When he is killed the live broadcast is cancelled and his life is revealed in all its lurid detail. We learn he has been married multiple times and fathered a child out of wedlock, as they used to say.  The more the police uncover the more we learn that Robert Strang has exploited women vilely. His big secret which serves as the motive for the crime is something pulled from the pages of  Victorian sensation novels. I won't mention it but you probably can easily guess from that hint. 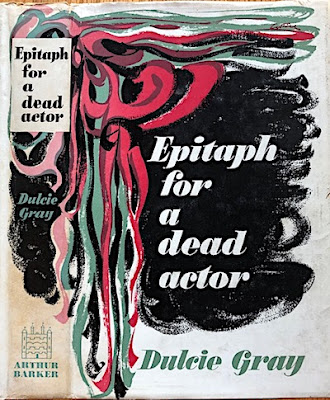 Only the women characters (apart from boring Louise) held my interest and got me to the end of the book. There is a conspiracy of sorts, a bit of ugly blackmail, and once again some false confessions and therefore alternate solutions to Strang's murder. But in the end there is nothing clever here, all of it so very familiar. The old hat dialogue that seems lifted from a 1940s melodrama is completely inappropriate for a novel written in 1960. Not even the backstage look at how a TV show is put together and rehearsed was enlightening. The setting which has a kind of John Dickson Carr importance in how the architecture and layout make it difficult for people to be seen from certain angles is not handled very well either.

All of the characters (even young Anita Weston, who appears all too briefly yet has perhaps the best written scene in the entire book) seem to be living in an England that died decades before the action takes place. Even the teleplay the actors are rehearsing, called The Schoolmistress, has a hoary plot reminiscent of a script pulled out of a dusty trunk left in someone's attic filled with Edwardian and Victorian memorabilia.

Even when she tries to add some excitement to the book Gray falls into cliche traps. When John Foster, the TV director, turns amateur sleuth the villain in a sort of disguise kidnaps him and locks him in an abandoned warehouse to prevent him from getting too close to the answer. The sequence filled with ludicrous touches just seems stupid in the context of the rest of the book and completely out of character for who the villain turns out to be. Foster spends 48 hours trying to find a way out of his prison and it's all so ridiculously contrived. He can't smash the window and crawl out because Gray invents reasons to prevent that. Instead he accidentally finds a hidden trapdoor that leads to a cellar that then leads to another exit! The whole sequence spread out over three chapters wouldn't pass muster in a boy's adventure book.

One plus for this book: a really cool plan of the murder scene appears on the final page. (see below) Why it wasn't placed at the front of the book eludes me. Thankfully, there's a footnote to draw the reader's attention to its odd placement. 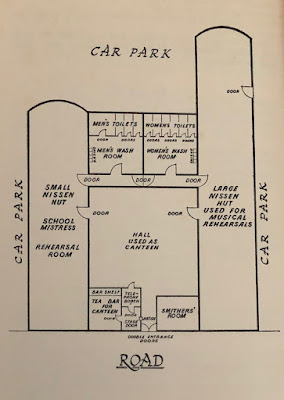 I can imagine that some actors would find their talent in creating and inhabiting characters to be an advantage in writing fiction. After all writing novels and playing a part have very similar artistic skills involved. I think in the case with Gray, she found herself heavily influenced by the dialogue of stage and screen rather than drawing from life.  Her worst fault (clearly stemming from her stage career) is her fondness for lengthy monologues. Everyone talks endlessly and melodramatically. My favorite phrase that occurs in both books I read is when any man gets angry at a policeman and feels personally insulted he exclaims, "Damn your eyes!"  Gray's characters don't behave like real people most of the time and they often sound like they are on a stage entertaining a matinee of blue haired biddies.

Dulcie Gray (1915-2011) was born in Kuala Lumpur, Malaysia where her father was a judge. She was sent to boarding school in England and returned to Malaysia in 1931. According to one of her autobiographies she ran away from home, managed passage on a cargo ship bound for England and got a job as a governess. In 1938 she gained admittance to Webber Douglas Academy of Dramatic Arts where she met her husband, Michael Denison. She had a long career on stage, movies and television. On stage she frequently appeared opposite her husband and she co-starred with him in a few movies.

I watched one of her earliest parts as a housemaid in a mediocre melodrama about a haunted house, A Place of One's Own (1945) starring James Mason, one of the many "Gainsborough melodramas" she appeared in while under contract to that movie studio. I also caught her in a few scenes opposite Denison in perhaps her best known movie, The Franchise Affair (1951) based on Josephine Tey's crime novel. Watching her on screen sort of explains the kinds of books she wrote. She is capable but lacks fire. When called on to perform a character part like the giddy maid she relies on silly stereotypical behaviors. Apparently she was well loved on TV in her late career when she had to play old matrons. She had a recurring role on an UK TV series called Howard's Way in the late 1980s and also turned up in an episode of Partners in Crime, the 1983 adaptation of Christie's Tommy & Tuppence book starring Francesca Annis and James Warwick.

In addition to her over twenty crime novels she wrote a number of ghost and supernatural stories (many of them found in the Pan Book of Horror anthologies), a couple of theater memoirs and a book on butterflies that draws upon her lifelong hobby of lepidoptery and her noteworthy charitable work as a member of the British Butterfly Conservation Society.

Sorry to say that these two mediocre efforts do not bode well for Dulcie Gray as a mystery writer. I won't be reading any of her other eighteen novels. I will say that her publishers had some talented artists working for them and her books certainly look enticing even if they most likely will not live up to the dramatic cover illustrations. If anyone else has read her other books and had a different opinion on her writing I welcome your comments below.