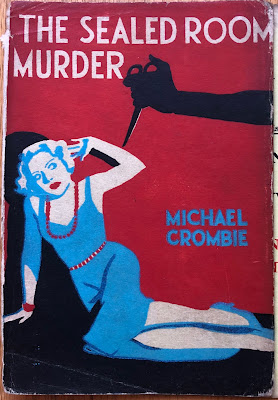 THE STORY: Murderous uncle Godfrey Winter does in his snooping nephew Eric and makes it look like natural causes. The victim’s sister suspects foul play and writes a letter to her brother’s friend en route to England from Shanghai. But the uncle learns of his niece’s prying and tries to kill her as well. Friend Alan Napier and reporter Larry Milner arrive in the nick of time to rescue her from the clutches of nasty Uncle Godfrey. Milner is determined to prove that Eric Winter’s death is murder and get the story of a lifetime. He turns amateur sleuth but his hijinks only lead to Uncle Godfrey increasing the stakes. Larry’s detective work may prove deadly for all involved.

THE CHARACTERS: How many novels have I read about the wicked uncle doing in his innocent heirs? This motif dates back to the Gothic novels of the 18th century and probably all the way back to the folk tales and fairy tales collected by the Grimm Brothers. In the hands of Michael Crombie (aka James Ronald, one of my favorite crime fiction writers) The Sealed Room Murder (1934) as much as it revisits well-worn territory seems fresh and invigorating thanks to his breezy style, good humor and penchant for action-filled sequences. There’s never a dull moment here.

Patricia Winter plays her part as the damsel in distress without ever resorting to melodramatic hysterics. Alan Napier is your typical hero too prone to the “falling in love at first sight” syndrome, or in his case falling in love at first hearing since her knows nothing of Patricia except what his friend Eric has told him. He has never even seen a photo of her. His first meeting with her is in the letter Patricia writes him that he receives just as the ship pulls into harbor in England. 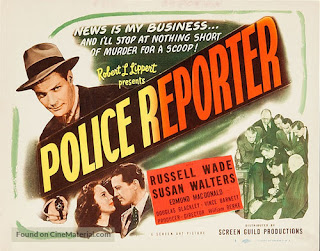 Like so many detective novels of the 1930s we have another reporter turned sleuth in Larry Milner. And like so many of his kind he is smarter and more resourceful than the police. He is clearly a clone of Ronald’s other reporter/detective Julian Mendoza. The only difference is Larry is younger and more physically fit than the permanently disabled Mendoza who must walk with the use of a cane. Larry also tends to work solo; he has no cadre of reporter colleagues upon whom he can rely to impersonate policemen and bodyguards. In fact he gets fired by his editor for intruding into a police investigation and refusing to stick to his assigned duties. Larry is determined to show up not only his former co-workers, many of whom he holds in contempt, by getting the scoop of his lifetime when he exposes Godfrey Winter as a murderer of the worst kind.

Complicating the plot is Winter’s nosey chauffeur who has retained incriminating evidence related to the car accident that nearly kills Patricia. Surreptitiously he takes photos of sabotage done to the car before the wreck. He later turns blackmailer with dreams of a farm in Kenya and £2000 of hush money to help him realize his African retreat.

Ronald makes good use of all his characters, even the most minor like the chauffeur and a teenage boy who after helping Larry and receiving a compliment for his cleverness decides to turn boy sleuth. The boy hopes to gather more information and get a “big scoop” of his own that will reward him with not just compliments but a pocketful of shillings from the reporter. All the characters have fully realized lives and we are privy to their thoughts, dreams and desires. More importantly, everyone has their time to be noticed and often take center stage for that brief shining moment.

To my mind this is the best kind of popular fiction writing. Every character introduced should serve a vital purpose in the story. Ronald knows this too and his books are all the better for that knowledge.

INNOVATIONS: The Sealed Room Murder is non-stop entertainment, a lively thriller told in the inverted detective style. Knowing that Godfrey is the villain from the start, however, does not diminish any thrills or suspense. The book is loaded with action and incident. There are plenty of unexpected events and shifts in tone and narrative. But perhaps the most unusual part of the book is that the murder that gives the book its title does not occur until the last quarter of the story. There are several deaths and a few murders, but the only locked room murder is of a character who may be the least noticed of the entire cast.

When this murder occurs it is a stabbing death in room with a door locked from the inside and a window that is locked with a “burglar catch.” The solution to the locked room is a baroque one to be sure with only few clues given and requiring some truly abstract thinking to figure it out. So puzzled is Larry that he consults with mystery writers to help yet none of them can provide him with an answer. He turns to a stage magician named Vantelli as well but also gets little help. Only when he builds a model of the room and examines it thoroughly does he get a literal breakthrough. After his frustrating study of the model and perusing he notes that result in nothing useful Larry in a rage throws the model at a window in his apartment drawing attention from the landlady who scolds him for the damage he has caused. Only then does the truth dawn on him.

THE AUTHOR: As “Michael Crombie” James Ronald wrote seven novels. A handful of copies of four titles turn up for sale at outrageous prices, while the other three are so absurdly rare that only one copy each is held in the British Library. Only The Frightened Lady features a series detective (Julian Mendoza, of course) but this really doesn’t count as it is a rewrite of his first mystery Cross Marks the Spot which already had Mendoza as the protagonist detective. 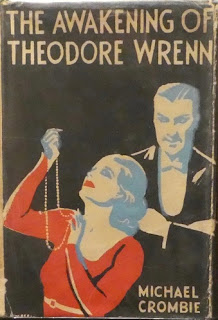 I’ve learned some additional information on James Ronald from Jamie Sturgeon, a British bookseller who I deal with frequently. He told me that he uncovered some newspaper articles that reported Ronald had been deported in 1955 because of money owing to New York State. Ronald also apparently unofficially adopted a boy.