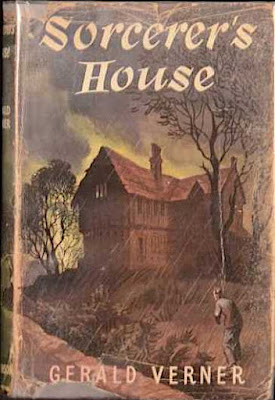 "By the golden apples of Hesperides!" Simon Gale is one amusingly boisterous detective.

Recently I learned of a trio of books featuring one of Gerald Verner's unusual and least known series detectives, Simon Gale.  The marketing info led me to believe that these were inspired by the books of John Dickson Carr with promises of haunted houses, weird legends, tales of past crimes and a plot similar to those that Harry Stephen Keeler specialized in -- save the wrongly imprisoned person from execution.  While the Carr analogy promised so much the only real thing that Simon Gale has in common with him is his detective's love of beer and the habit of crying out bizarre literary and historical inspired exclamations like "By the seven plagues of Egypt!" and "By the nine lives of Grimalkin!"

To date these are the best mysteries I've read by Verner. Much of their delight and success is due to Simon Gale, a larger than life character who will remind diehard detective fiction fans of other beer guzzling, blustery, and opinionated sleuths like Sir Henry Merrivale and Professor Stubbs. Gale is a professional portrait painter who comes to crime solving by accident.  With only a handful of newsworthy successes Gale has gained a reputation as a criminologist and is more than happy to help when puzzling murders come his way. In his second adventure in crime Sorcerer's House (1956) he encounters a haunted house with an ominous curse. Whenever light appears in the window of Long Room at Threshold House someone will soon will die, usually violently. 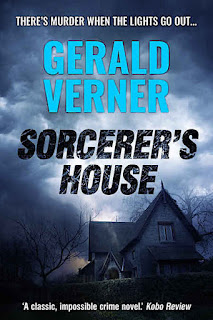 Alan Boyce, American publisher, is compelled to investigate during a thunderstorm when a strange light emanates from Threshold House. When he arrive on the scene there are no lights in any windows. But the body of Paul Meriton is found just below Long Room. It appears he has either fallen or jumped from the window.  Perhaps he was pushed? But there is no sign of anyone having been in the house other than Meriton and Boyce. Gale steps in immediately examining the scene personally and starts with prying questions that soon reveal the complicated relationship of Meriton and his wife Fay who supposedly left him for another man but seems to have utterly vanished. There are whispers of mental illness, insanity and hints of murder in Fay's past. Gale is determined to find her and get at the truth, put an end to rumors and learn whether or not she is responsible for not only the death of her husband but two other people as well.

Verner excels at creating a creepy Gothic atmosphere and draws from the conventions of Gothic literature in this detective novel. Tension is relieved by the frequent humorous bouts of beer drinking and the litany of Gale's odd exclamations recalling Dr. Fell's "Archons of Athens!" Unfortunately, once again his plot gets away from him and his attempts at misdirection misfire when he shows his hand too many times. A last minute effort to bamboozle the reader fails miserably and astute readers may find themselves recalling a moment in the early pages during the discovery of Meriton's body that stood out like a sore thumb.  The resolution comes as an anticlimax and makes this second effort the weaker of the two. 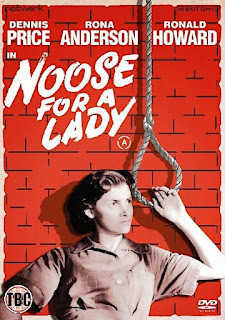 Much more successful is Noose for a Lady (1952), Gale's actual debut as a detective. Here Gale is asked to look into the case of Margaret Hallam in prison for poisoning her husband and about to be executed in only a few days. He must race against the clock and sort out who among the seven suspects was the truly guilty party.

Every one of the suspects has a secret involving a crime of some sort. Gale meets up with Mrs. Barrett, the Hallam housekeeper; Miss Ginch, a spiteful church lady; Mr Upcott, an effeminate collector of rare china; Major Ferguson, the typical ex-solider; Mrs. Langdon-Humpreys an archetype of the imperious harridan and her niece Vanessa; and Dr. Evershed, the usual local physician who turns up in these village mysteries. The story begins to resemble a sort of homage to And Then There Were None with each secret revealing each of the seven suspects to be more vile and odious than the preceding one interviewed. Among the crimes are murder, mass slaughter during war, negligence leading to a suicide, out of wedlock childbirth and other social "horrors" of the era. But who among these people felt it necessary to poison John Hallam, a sadistic man who collected books on torture and cruelty, and who also dabbled in blackmail?  Gale aptly sums up this lurid case: "Murder's a queer thing. It's like suddenly turning on a bright light in an old, damp cellar. All kinds of nasty, crawling things go scuttling away to their holes to get out of the glare." 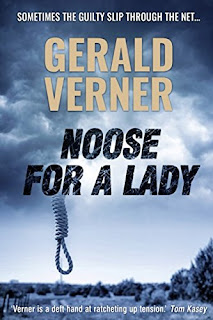 There are at least two well executed shocking surprises before we reach the truth behind Hallam's poisoning murder. The story is an exciting one what with all the secrets being uncovered and the twist before the denouement is actually the most interesting and unexpected part of the book. Yet again I have to admit that Verner has let me down in the end. The ending is histrionic in the extreme, the murderer is ludicrously far-fetched and makes the entire story seem preposterous. Too much is explained away as madness as it is in Sorcerer's House and it is a disappointing finale to an otherwise genuinely fascinating and well constructed detective novel.

Noose for a Lady had an interesting previous incarnation and later life besides being a novel. According to Chris Verner, the author's son, it was first written for radio and later was adapted in a  faithful movie version. The movie poster appears above as it was adapted for the DVD case. John Grant of the Noirish movie blog has reviewed the movie in his usual perspicacious and informative style. However, I don't suggest you read it until after you read the book or see the movie as he gives away several plot elements better left unsaid.

There is a third and final book (The Snark was a Boojum) which I have not purchased nor read.  That last book in the Simon Gale trilogy was unfinished when Gerald Verner died in 1980 and his son has completed it. It was published for the first time by Ramble House a few years ago is is available for sale along with the two other books offered by Endeavor Books in both paperback and digital editions.

Simon Gale is one of the best of Verner's many series detectives. He's colorful, keen eyed and sharp witted, often providing riotously funny laugh-out-loud moments amid the eerie luridness that pervades his investigations. Despite Verner's flaws in plotting and his penchant for high melodrama and operatic displays of villainy in the final pages I highly recommend these two books for anyone unfamiliar with his work. They are most definitely the best of the Gerald Verner mysteries I've read as far as character, atmosphere and detective elements with Noose for A Lady ranking slightly higher than Sorcerer's House in terms of "bang for your buck" mystery quality.

"By the cloven hoofs of Pan!" What are you waiting for? Go buy a copy of one of these books.
Posted by J F Norris at 10:54 PM