I was pleasantly surprised when this bit of pasteboard appeared in the final pages of a 1934 murder mystery I recently finished reading. Because coming across it told me that this book most likely has not been read or opened since this bus ride! 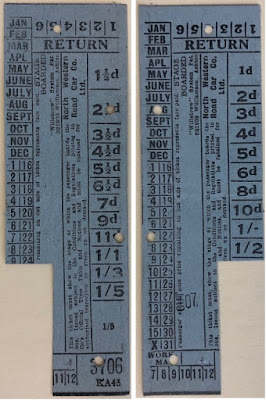 On the left is a photo of both sides of a bus ticket printed by the North Western Road Car Company, a transportation company started in 1923 and originally based in Stockport, England. In its final three decades the company had moved headquarters to Liverpool. From 1923 to 1986 NWRC operated bus services in the counties of Cheshire, Lancashire, West Riding of Yorkshire, Derbyshire and Staffordshire. The bus company’s entire history including its many mergers and acquisitions of other transportation services over its 60+ years is outlined – where else? – on a Wikipedia page here.

In comparing this ticket against dozens of images of similar bus tickets from the North Western Road Co. I discovered that this was the earliest of them all. All I had to do was look at the cheapest fare price (1 penny). On other tickets the lowest fare one could pay was no less than 3 pence. So I’m certain that this ticket dates to the mid-1930s (no earlier than 1934 the book’s publication year) The other tickets I looked at had years on from the World War 2 era.

Close study shows the date this particular ticket was purchased and the fare paid. We know that the ticket was purchased on August 7 (see right side of photo) and I think the 4 punched at the very top indicates 1934. The rider also paid a "Workman" fare meaning, I assume, that he was a daily commuter going to or coming from his place of employment. Reading the fine print instructions reveals that the number above the cut off portion was the fare paid.  This "Workman" fare was 1/2 or 1 shilling, 2 pence.

This particular ticketing system was developed by the Willebrew company. I found several websites devoted to the history of transportation in the UK and the best designed and most informative was Bob Mockford’s site which includes loads of fascinating info in his “Bus Museum” section.

Here is a verbatim section taken from that site describing how the Willebrew ticketing system worked:

The Willebrew machine used pre-printed tickets. Unlike the earlier punches, these tickets had a large number of fare options on each ticket. This meant fewer tickets for the conductor to carry.


The conductor selected the ticket, inserted it into the machine and cut off a section up to the fare paid. This section was retained inside the machine and the remainder handed to the passenger.

The conductor did not know the value of tickets issued. This would be calculated later in the office, preventing the conductor from taking any surplus cash.

The Willebrew is opened by inserting a small screwdriver into a hole in the bottom of the machine, pressing the spring-loaded catch inside and pulling the cover downwards. It is not necessary to completely remove the cover as shown in the photo, in fact it is better not to as holding down the catch while re-inserting the cover is difficult.

Once opened, a clerk in the office would remove the pieces of ticket to calculate the takings.


A review of the book -- The Sealed Room Mystery -- in which I discovered this bit of paper is coming up soon
Posted by J F Norris at 12:00 AM