THE STORY: Grace Fielding and her writer husband Philip have come to Medlar's Farm in Northumberland as an escape from their marital discord.  Philip is in love with Angela Campion.  Grace acknowledges the affair but refuses divorce. Perhaps this getaway will help repair whatever went wrong in their marriage. But Grace continues to obsess about Angela and her husband's philandering. When she learns of the gruesome past at Medlar's Farm, a murder by poison, and the ghost of Susanna Vavasour, Grace's life soon becomes a mix of domestic strife and psychological terror.

THE CHARACTERS:  The story in The Devil Snar'd (1932) is almost entirely told from Grace's point of view.  What begins as a tale of a stubborn woman trying to work out marital difficulties with her writer husband soon gives way to a story of obsession, jealousy, morbid imagination and revenge. The house at Medlar Farm is the site of a horrible crime of passion. Philip is thinking of using the story of the murder of an unfaithful husband that backfires as the basis for his new novel. He's unwilling to discuss his work, but Grace finds the manuscript and begins to read his novel as it progresses. She begins to see too many parallels between her life with Philip and the story of Susanna's life. She feels compelled to visit Susanna's grave before it is forever lost when engineers building a reservoir will submerge it and the neighboring church.

The relatively small cast of supporting characters include Mrs. Mace (the landlady and neighbor), a chemist, a doctor and some minor servants. The novel is almost entirely dominated by Grace and her eventual merging with the personality of long dead Susanna, either an accused murderess or a victim. One is never really sure which is true until the final pages. 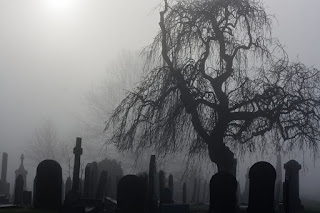 ATMOSPHERE:  Grace's slow mental deterioration is conveyed with macabre touches reminiscent of Poe's morbid imagination as well as 18th century British Gothic writers. Spider and insect imagery dominate the eerily descriptive narrative.  They appear everywhere, crawl over everything, then disappear into the ever present shadows at Medlar Farm. The novel takes its title from images on a carved stone keystone above the arch of the doorway to the Crompton Old Church which guards the graveyard where Susanna Vavasour is buried: "a grotesque fiend with medieval horns and tail was pursuing a thin creature in grave-clothes who turned at bay, and with an expression of the utmost horror, cast a net over the enemy who writhed in astonished helplessness." It's a powerful image that will haunt Grace for the rest or the book - this idea of the seemingly helpless victim who "suddenly became the aggressor." She cannot help but link this shrouded figure with her vision of Susanna, though she has no idea what the woman ever looked like. 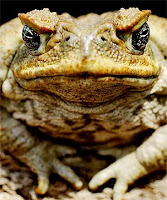 At the midpoint in the book Grace tells her husband the story of a man who was practicing the "evil eye" by staring at toads and striking them dead ("Just get them somewhere where they could not move and gaze at them until they died.")  Then one day he got a toad "which seemed to suspect his designs." It tried to escape and when flight was not possible turned itself on the man and stared right back at him. The man found he could not look away and they continued to gaze at one another until it was too late. In the morning the man was found dead on the floor of his laboratory. Similar to the images of the stone carving known as "The Devil Snared" Grace cannot erase this story from her mind. It reminds her of the legend of the murder at Medlar Farm. Soon she is seeing Susanna's ghost, they have conversations, and together they begin to plot a murder inspired by the crime that cost Susanna her life.

QUOTES:   In the big house it was not [sane and normal] -- the maladjustment between herself and Philip seemed to affect everything.

The loneliness penetrated deep into her being; the shut-up church, the empty house--were far more emblematic of solitude than the lonely land and water. The people who had lived here, been buried here, had left behind them a heritage of utter desolation.

She was so horrified by this lurid illumination which was worse than any darkness, that she tried, for the first time in her life, to pray, to honestly send up an appeal for help to some high and merciful Power. She could not do this, but she could check the horror which had been breaking on her -- and she remained for a while mute and immobile, crouched below the corner..."

She remembered a horrid experiment which she had once read of: a mouse and a scorpion were once set by some inquisitive man of science under a glass bell, where finally, after a dreadful duel, the timid beast killed the poisonous insect (sic). The same story, of course, as that of the man and the toad. It was her story.

"How fond you are of that word decent," smiled Mrs. Fielding. "What does it mean, nowadays, I wonder?"

THE AUTHOR: "George Preedy" is one of the several pseudonyms used by Gabrielle Margaret Long, a prolific writer perhaps best known under her most popular alter ego of Marjorie Bowen. Using a variety of pen names Long wrote some fine examples of ghost stories as well as Regency romances, adventure and crime fiction. As "Joseph Shearing" she wrote a series of historical crime thrillers, based on actual murder cases, some of which are the best examples of that subgenre.

EASY TO FIND? This is a true rarity. I was lucky to stumble across a copy being sold for the unheard of price of £3.99 from a UK bookshop who clearly hadn't a clue what they were selling. Currently there are only two copies for sale from online booksellers each priced at $300 or more. This short novel was first published by Ernest Benn Ltd. as part of their "New Ninepenny Novels", a short-lived experiment in mass market paperbacks comprised of stalwart bestselling writers in genre fiction categories of mystery, romance, adventure and fantasy. There is one UK reprint issued by Cassell & Co in 1933 that includes The Devil Snar'd along with Dr. Chaos, another of Bowen's short (and very scarce) horror novels written under the Preedy pen name. There is no US edition at all.

The Devil Snar'd is so startling and arresting in its use of Gothic imagery and horror motifs I cannot understand why it hasn't been reprinted in over 75 years. Probably because it's so damn hard to find. I'm very willing to offer up my copy to any enterprising publisher interested in reviving this minor Gothic masterpiece. It deserves rediscovery by a wide audience appreciative of macabre fiction.
Posted by J F Norris at 12:03 PM