Death Has Many Doors - Fredric Brown

In the fifth book featuring Ed Hunter and his Uncle Ambrose the two have set up shop in their own private eye agency. Death Has Many Doors (1951) is the story of a young woman named Sally Doerr who wants to hire the two detectives because she fears for her life. She is convinced that someone is going to murder her. And that someone happens to be a Martian. When Sally dies in her locked bedroom on her third floor apartment with all possible ways in and out of the room guarded or impossible to access Ed begins to wonder if something extraterrestrial really did have something to do with her death.

To be honest this was a very middling detective novel. While there seems to be a lot going on when you start to look at it closely you see it as a formulaic Q&A style detective novel with lots of padding. And lots of alcohol.

Sally is plied with alcohol at a bar when Ed, in an earnest attempt to show concern, tries to convince her that she doesn’t need a private detective she needs to see a psychiatrist. (One, two cocktails, “Oh no more please…” pleads Sally. Three, "I really shouldn't" four) Then off they go to her apartment where she asks him to spend the night ("In the other room, please.") because she’s so frightened. To Ed’s shock she dies in her room about three hours later.

More imbibing follows. Ed seems to find it necessary to bring alcohol wherever he goes. He gets Sally’s sister Dorothy drunk on whiskey and then they go skinny dipping by moonlight near the shores of Indiana Dunes State Park. She insists on the swimming, he cannot get her to change her mind. That doesn’t go very well. I wonder why! Drinking and swimming is just as stupid and drinking and driving. Dorothy is the second corpse to turn up in the book. No one bothers to question whether the whiskey she drank had anything to do with her death. In real life it most definitely would have. The real reason for her death (it’s a murder by proxy, sort of) is ridiculously far-fetched, probably literally impossible to accomplish. Brown relies on a detective novel gimmick that I thought went out of fashion in the mid-1940s. 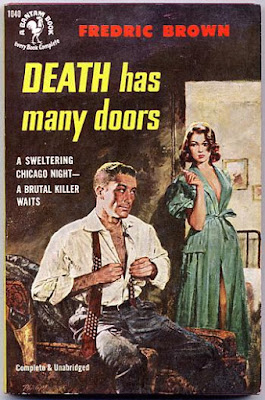 The landlord at Sally’s apartment has lots of info to offer up, but once again Ed decides it’s best to cajole him with whiskey not flattery. All this booze bribing! It was not only disheartening, it was sickening. The landlord not only gives up all the details on the building's occupants, how long they’ve been there and all their personal business (were there ever really landlords this involved in their tenants’ lives?), but he gives Ed the keys to Sally’s apartment so Ed can come and go as he pleases and continue his investigative work. Or what passes for investigation.

By the way, there is only one policeman in the story -- their friend Frank Bassett. Ed and Uncle Am report their findings to him while he shares with them the lack of evidence. But strangely he’s curious about what they have turned up. Which is hardly anything. This is the only example of a negative detective novel I’ve ever come across. The more the two detectives delve into the case the less they find.

Here’s the pattern of how this detective novel unfolds. Ed wanders all over Chicago’s North and South sides with side trips to Evanston and Indiana constantly telling himself he’s stupid, he can’t figure anything out and that he’ll never get enough evidence to convict the killer. He goes into Sally’s apartment, finds nothing. Insert several mediocre action scenes. Then he visits again, still finds nothing. Insert scene brimming with sexual innuendo featuring Ed and Monica Wright, the gorgeous blond secretary. Does he go a third time? You betcha. What does he find? More self-doubt and psychological masochism. After each instance of miserable failure and beating himself up guess what he does? That’s right. Seeks out a bottle of whiskey.

Should I tell you about his interview with Sally’s ex-fiance in Evanston at a used car lot? That Ed never introduces himself or states his purpose or even tells the guy that Sally is dead. How the guy misinterprets who Ed is and how they get into a boxing match. Oh, too late. 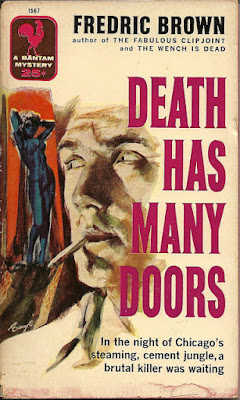 The only reason to keep reading is to find out how Sally and Dorothy were killed. Brown does a good job of making the reader believe that the two deaths were cleverly disguised murders. I wanted something startlingly inventive to be part of the solution to both murders. But the end comes as something of an anticlimax. The major clue is provided to us in the third to last chapter by a whiz kid 11 year-old boy who (after being talked about frequently) makes his only appearance in that chapter. In order to come up with a smidgen of the final solution the reader needs to apply what the boy talks about to something that Ed saw in Sally’s bedroom. While Sally’s death fits into the realm of a scientifically sound yet bizarre murder method, Dorothy’s cause of death (as mentioned previously) is pure fantasy. If all this isn't disappointing enough for you the identity of the murderer is not at all surprising. It all ends in an electrical fizzle instead of a satisfying explosive bang.

Nevertheless, I’m moving on to some other Fredric Brown books I have uncovered on my shelves. I’ll be reporting back next month. For a couple of  other opinions on Death Has Many Doors see the links below, both less scathing but neither very complimentary.

TomCat's post at Beneath the Stains of Time
JJ's post at The Invisible Event
Posted by J F Norris at 6:28 PM