﻿In one of those serendipitous interweb discoveries I stumbled across an advertisement for this book by Joseph Shearing in an old magazine. The ad had a review blurb from prominent humorist, critic and champion of the detective and mystery novel, Will Cuppy proclaiming the book as one of the most surprising mysteries of 1940. Had it not been for that glowingly enthusiastic review I am sure I would never have tracked down this intriguing, beguiling and – yes – surprising historical crime novel.

It's that title that's a turn off. The name conjures up an image of some toothless, hairy-chinned, crone from a fairy tale or an old-fashioned kid's book. She does indeed have a problem with facial hair but she's far from a cute kid's story character. Shearing presents her as an alternately endearing, ever helpful spinster and a sinister relative with a mysterious past and hidden motives. With a cast of supporting characters as equally chameleon-like and a brooding atmosphere of unease and mistrust the book evolves into an extremely well done homage to the old Victorian sensation thrillers best exemplified in the work of Mary Elizabeth Braddon, Wilkie Collins and J. Sheridan LeFanu.

In its most easily obtainable edition, a Berkley Medallion paperback from 1965 (pictured below), Aunt Beardie (originally published in the UK in 1939) has been marketed as yet another in a long line of Gothic suspense novels so popular in the mass market paperback world of the 1960s. All of Joseph Shearing's books were marketed this way by Berkley regardless of the book's content. I have to say it is a great disservice to the writer. Hardly as formulaic in plot as that genre and of a literary quality not to be found among any of those dozens of Gothic writers Aunt Beardie is fashioned out of the tropes of sensation fiction with a emphasis on historical accuracy in the story background (often lacking in 60s Gothics) and composed of a stylized, often rapturous prose. 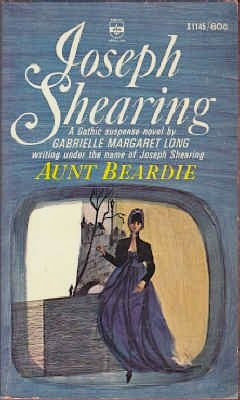 "Joseph Shearing" is in reality Gabrielle Margaret Long who is probably best known under yet another of her many pseudonyms – Marjorie Bowen. As Bowen Long wrote several highly regarded supernatural novels and short stories. Arkham House collected a handful of her more shocking ghost stories and weird fiction for a volume entitled Kecksies (Arkham House, 1976). As Joseph Shearing, however, Long wrote fifteen historical suspense novels spanning periods ranging from the late 18th to early 20th centuries, and populated with deceitful lovers and opportunistic fortune hunters scheming and plotting their dastardly deeds. In some cases she based her novels on historical fact as she notes in a brief preface at the start of Aunt Beardie.

Set in the post–French Revolution era the book's densely plotted action is split between two time periods and two countries. A vignette of a prologue sets the mood in France just prior to the storming of the Bastille mysteriously hinting at the future activities of an unnamed young man. This leads us into the first section set in the final days of the Reign of Terror where we learn of two cousins, both young girls, fleeing the carnage of France by ship for the safety of England. Then, a flash forward of thirty-five years. Lady Sherlock, the only girl to survive the ship voyage to England, is now a grown woman with her own family. She is visited by the long forgotten aunt of the title. Tante Barbe, as she is first known by her French nickname, announces to Lady Sherlock that she is Vivienne her cousin long thought to have perished after their fateful voyage from a terminal illness. The longer her visit the more the aunt seems to have a hold over Lady Sherlock. Blackmail, deception, masquerades and disguises are teeming throughout the story. Lady Sherlock's daughter Jenny, keen on discovering the true identity of Aunt Beardie and the real reason for her sudden reappearance in England after so many years, is ultimately compelled to concoct her own plot, one that will force Jenny to make severe often criminal choices. The story is one to be savored for both the lush writing and the suspenseful manner in which the events unfold. 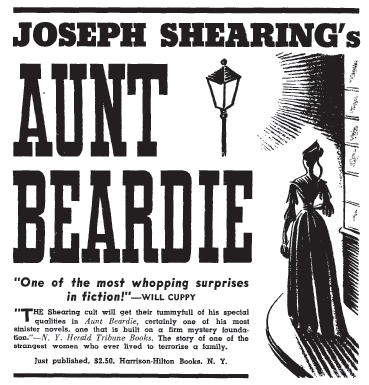 Cuppy is absolutely correct in his "whopping" assessment (seen at right). To spare you all painful eyestrain the full quote in that minuscule font is: "The Shearing cult will get their tummyfull of his special qualities in Aunt Beardie, certainly one of his most sinister novels, one that is built on a firm mystery foundation." The book is a small wonder of a shocker. Aunt Beardie is one of those rarities I unearth in the seemingly bottomless pit of forgotten books: a work that is undeserving of its Limbo status. It ought to be treasured by legions of bibliophiles looking for a uniquely rewarding read.
Posted by J F Norris at 12:47 AM