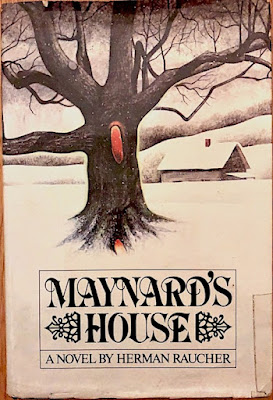 THE STORY: Austin Fletcher has traveled to rural Maine to claim his inheritance. Fresh from war torn jungles of Vietnam Austin has left behind his friend Maynard, one of the many causalities of the war, and bypassed his Midwestern home in order to set up house in the cabin that Maynard willed to him. Maynard's House (1980) is remote, forlorn and reputedly haunted. On the grounds is a tree that casts no shadow that according to legend is the site of the execution by hanging of a 17th century witch. Austin dismisses all the stories he's told as superstition. And then Ada and Froom start visiting him and his new life in Maine becomes even more foreign and strange than his life as a soldier in Vietnam.

THE CHARACTERS: The cast of characters is small and contained. Raucher is more interested in the effects of a solitary man continuing his life of isolation in rural America after the horrendous life of a Vietnam soldier. It's a curious type of war veteran fiction which was popular in the late 1970s and continuing into the next decade. While writers like Tim O'Brien (author of Going After Cacciato, et al.) captured the horror of Vietnam both in and out of the jungles and of the many survivors' nightmares of PTSD, Raucher explores the camaraderie that develops between soldiers to tell a story of a friendship that manages to retain a deep bond even after death. The novel is one of claustrophobia and solitariness. Loneliness also obviously features strongly in the narrative. Austin meets only four people over the course of the novel and he is constantly travelling back in time via his memories to recall those rare moments of quiet when he and Maynard would talk of Maine, the cabin, and life far removed from Vietnam.

Austin is led to the house by the local train stationmaster and postman, Jack Meeker. Jack is a died-in-the-wool Down Easter, as rigidly New England in speech and manner as one can get. He has a thick accent, a stubborn manner, and the kind of irritating common sense that can drive anyone to distraction. Austin loses his patience more than once with Jack's peculiar matter-of-fact nature. From Jack Austin learns of the legends of the witch tree, Devil's Dancing Rock, and the Minniwickies, a curious race that seem a blend of fairy and Native American according to Jack's odd description. Austin will encounter all three but the reader never knows if at anytime anything Austin is experiencing is the product of his imagination or is actually happening.  Froom and Ada, a young boy and his teenage sister, claim to be Minniwickies. But Ada also tells Austin that Jack and the bear hunter he met late one night are dead. Has Austin been meeting ghosts all this time? Is Ada teasing him or telling the truth? And does Ada even exist?

INNOVATIONS: Raucher skillfully plays with the reader's perception in his clever manipulation of fact and dream and memory. The opening chapters seem to be told in real time and Austin seems to be meeting living people. But by the end of the novel a bizarre, almost science fiction, element is introduced that changes everything that occurred previously. One never really knows what was truth, what was dreamed up from Austin's memory of Vietnam, and what was orchestrated by the powerful presence that manages to control time, place, and all who live in the cabin near the witch's tree. It's one of the most unique contemporary treatments of a haunted house story incorporating fantasy and science fiction elements recalling the work of Algernon Blackwood, Arthur Machen and H. P. Lovecraft. Raucher's method takes a less weird path than his predecessors, rather the narrative is confined in the tortured mind of a war veteran. Still, the final chapters cannot be dismissed as anything other than some of the best weird fiction writing of the late 20th century.

Austin is truly isolated, friendless, and estranged from family. He and Maynard had in common a love of being alone. Maynard's hero is Henry David Thoreau, and the bookshelves of the cabin are lined with Thoreau's works. Austin finds a diary that serves as a survival handbook and a teaching tool for anyone who might be living in the cabin. Thoreau's philosophy is blended into the anecdotes and instructions with quotes from Walden; or Life in the Woods and other essays strewn throughout the diary/handbook.  Raucher is clearly drawing comparisons to this idealistic desire to become one with nature and the possible side effects of living too extreme of a solitary life. Maynard discovers this too late and tries to warn Austin through various messages, some of which come to him via dreams and memories. But Austin will pay no heed to the warning signs, the many omens, and the terrifying events that happen at night.

QUOTES: "There'll be the Devil to pay, " she said, not waiting for his response, leading him about on the rock instead, dancing him to a music he only faintly began to hear--church bells and strings, too distant to comprehend.

He cupped his hand to her chin, raising the dear face to his, sighting it for a kiss. But the eyes looking up at him were so filled with cold and withering hate that the kiss never came to pass. It lasted for but a moment, that look, but all the same it struck him with the thin rage of a stiletto, inflicting no wound yet inferring a bloodless and incredulous death.

The night passed, Austin becoming accustomed to the amorphous haunts that populated it. His house, for some time, had been schizoid. By day it was as bright and inviting as a house could be--a Christmas card, a Robert Frost poem. But by night it was Edgar Allan Poe and Nathaniel Hawthorne, a foreboding thing of shapeless terrors and a casual shadows, a cold place where no lantern lasted the night and no fire emanated any warmth.

"A house is a place to go back to, to regroup in. A house is a kind of special corner of the universe. It's a place where everyone whoever lived in it still does."
"What you're sayin', Maynard, is what I know. I got a lot of company here."
"That's the nature of a house. It absorbs its occupants, kind of keepin' them forever alive." 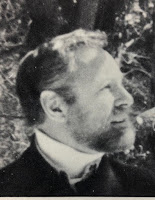 THE AUTHOR: Herman Raucher began his career in advertising, but soon had success as a writer for TV programs in the 1950s. He then branched out to movies as a screenwriter. He received notoriety for his first movie script, the racially charged satire Watermelon Man (1970), now a cult movie of sorts, with Godfrey Cambridge in the title role of a bigoted white man who wakes up one morning to discover he has transformed into a black man. His most famous writing is the script for Summer of '42 and its later novelization. Other movie work include a script based on the 1967 Grammy nominated ballad "Ode to Billy Joe" about a teenage suicide and an adaptation of Sidney Sheldon's potboiler The Other Side of Midnight. Raucher's other work include the play Harold (1962), produced on Broadway starring Anthony Perkins and co-starring Don Adams, and the novels A Glimpse of Tiger (1971) and There Should Have Been Castles (1979). 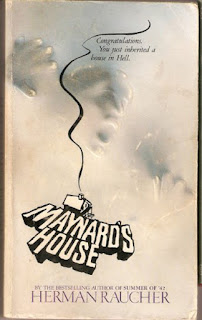 EASY TO FIND? Very good news here. For once this book is fairly easy to find in the used book market. It was published in both the US and UK in hardcover and paperback editions. Dozens of copies are available on various bookselling websites with prices all over the place as is to be expected these days. Paperback copies tend to be the cheapest, but it looks like most of them are also unfortunately ex-library books. The only modern reprint of Maynard's House is a paperback edition from Diversion Books released in 2015. Remarkably, you can still get a brand new copy of that edition. (It's a probably a POD outfit.) For all you Kindle readers there's this additional good news: Diversion releases their books in digital editions as well as paperback. Happy Reading!
Posted by J F Norris at 10:22 AM