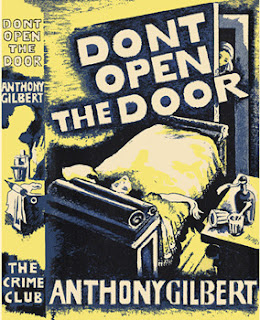 Don't Open the Door (1945) is Anthony Gilbert's seventeenth novel featuring lawyer-detective Arthur Crook with an opening that calls to mind cliches of 19th century sensation fiction and old black and white movies we used to watch on "The Late Show". Very late at night, walking down fog covered streets, Nurse Nora Deane makes her way to the home of her latest charge, an invalid named Adela Newstead. Nora is helped along through the maze of fog by a passing Good Samaritan. While safely ushering her to the Newstead's front door he finds out her occupation, her employer's name, her age, that she's an orphan and basically friendless. She learns only his name -- Sammy. Nora clearly doesn't subscribe to the old adage about strangers and conversation.

When Nora meets Mrs. Newstead she seems frightened and agitated. A soon as her husband leave the two alone together Adela gives Nora an address book, tells her to call Herbert and not to tell her husband. Nora promises to do so, but foolishly waits until the next day. That night Mrs. Newstead dies unexpectedly.  The reader a cannot but help suspect foul play and the culprit seems to be no one else but Arthur, the husband.  But can it really be as simple as that?

I was expecting this to turn into something along the lines of the Had I But Known School of mystery fiction pioneered by Mary Roberts Rinehart and Mignon Eberhart. Nora truly seemed to be one of those dimwitted heroines who sees everything too late and then regrets not taking action earlier. So much of the first few chapters seemed all too familiar, I'd read it before many times. I was haunted by similar scenes in Eberhart's The Patient in Room 18, Rinehart's The Window of the White Cat, Some May Watch by Ethel Lina White as well as her chilling short story "An Unlocked Window". The US publishers must have recognized this aspect of the book for they changed the original prosaic title to the luridly Gothic Death Lifts the Latch.

But I should have known better than to expect anything formulaic from Anthony Gilbert who excelled at using well-worn motifs of mystery fiction and exploiting them in unusual ways. For soon Nora is following up on Mrs. Newstead's request to get in touch with Herbert Webster who turns out to be her brother and only living relative. Herbert is very suspicious of his sister's sudden death. When Sammy turns up at the Newstead home looking for Nora, Albert begins to get a little panicky. And the reader too is certain that Arthur is guilty of his wife's murder. But just how did he manage it?

The brilliance of Don't Open the Door lies in a clever touch in the the narrative structure. Gilbert has us follow the murderer in certain sections told from that point of view. We are almost convinced who we are supposed to think he is. Yes, the murderer is identified with a male pronoun late in the novel. But the story is told in such a way that the person we think he is turns out to be completely wrong.

Once again this mystery novel is remarkable for Gilbert's skillful blend of subgenres. Never fully satisfied with the confines of detective novel formulas Gilbert will always veer out of whodunnit territory into the land of thrillers. Equally comfortable in either mode Gilbert often enjoyed exploring viewpoint, playing with narrative, and focussing on the culprit's actions and motives while the heroes and heroines desperately try to uncover the truth before more mayhem occurs. In Don't Open the Door the touches are so matter-of-fact the reader is convinced that Gilbert has all but told us the killer's name. However, the final pages come with Gilbert's trademark unexpected twist, one that may come as a real shock to those not keen to her tricks or who failed to pay close attention to subtle details.

Crook enters the story in the final third after Nora is abducted. Together with Sammy Parker and a reporter Roger Trentham the trio race against time to find the missing nurse. There will be another murder, a mysterious car wreck at the bottom of a cliff known for suicides, and some last minute surprises before all turns out well and an ingenious killer is literally unmasked.

QUOTES: Arthur Crook: "The woman with a conscience. If you ask me a conscience is like a Rolls-Royce. It's ostentatious unless you're sure you can afford it."

Getting past Crook was something quite different. Because in spite of what he'd just said he knew a lot about Crook, and he'd sooner be cornered by a rat. You can kick a rat off sometimes, but Crook would be as difficult to escape as an octopus.

He grinned in his turn; and he went on grinning till he looked like the wolf after it had eaten Red Riding Hood's grandmother.

"Marriage can be as wild as the jungle. I ought to know. I sometimes wondered if I'd married the original Tarzan."