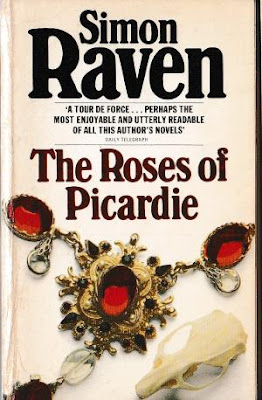 THE STORY: Two academics follow a trail of clues encoded in 16th century paintings, ancient manuscripts and medieval legends hoping to find the location of a lost treasure – The Roses of Picardie (1980), a necklace of rubies that carries a deadly curse.

THE CHARACTERS: This adventure novel of epic scope follows two teams of treasure hunters led by the two academics Jacquiz Helmut, the Collator of Manuscripts at Lancaster College, and Balbo Blakeney, a biochemist now disgraced and dismissed from his post for alcoholism. Jacquiz is teamed up with his wife Marigold and they travel from England to Greece to France pursuing stories and legends while sifting through all the material for clues. Balbo begins his quest as a solo adventurer but is soon paired up with Sydney Jones, an ex-professional cricket player turned spy. Jones has been sent to find Balbo and bring him back to the UK by a secret society interested in Balbo’s WW2 era work as a biochemist and — bizarrely — rat behaviorist. Along the way these two pairs of treasure seekers meet up with an outrageous cast of supporting characters that include a foul mouthed dowager, a Greek midget and his vampire servant, a Greek man intent on learning English while picking up as many scatological slang phrases as he can, and a mysterious young man with a beautiful face and the body of a god who manages to turn up everywhere at the most surprising moments. 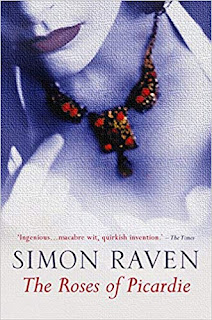 INNOVATIONS: Raven has subtitled The Roses of Picardie “A Romance” and it is true in every sense of that literary term. Perhaps a better, more accurate subtitle might be “A Romantic Odyssey” for it also belongs to that long line of heroic epics involving quests dating back to Homer. With its rousing mix of bawdy humor, intricately detailed medieval history of the mythical Comminges dynasty who originally owned the necklace, and the teeming anecdotes of arcane folklore The Roses of Picardie is one of the most exhilarating adventure novels of the late 20th century. I’ve not encountered a book so rich with eccentric characters, laugh out loud farcical comedy, and eyebrow raising moments of unexpected thrills in a very long time. One moment the reader is taking in a rich history of the Comminges family and the next there is a Chaucerian incident involving stopped up toilets and ancient manuscripts being used as toilet paper substitutes. In one section you get the history of Devil worshipping Albigensians and then a few pages later you learn of the legend of a French dragon known as the Tarasque and its relationship to St. Martha. The book defies categorization with its marvelous mix of vulgar jokes and farce, sophisticated wit, erudite history, academic satire and multiple lessons in arcane legends and superstitions. 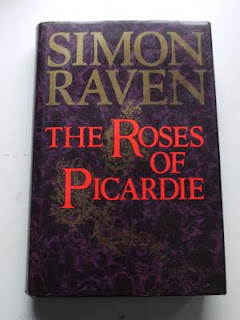 Most remarkable is that Raven seems to have invented the kind of novel that Dan Brown would be credited for decades later in his series of pulp thrillers featuring the symbologist Robert Langdon. There is one sequence, in fact, that most definitely foreshadows The Da Vinci Code when Jones and Balbo “decode” the portrait of Andrea Comminges and discover through hidden images and initials one of the locations where the necklace was hidden. It’s one of the finest examples of this kind puzzle solving that combines a knowledge of cryptography, symbology and ancient history, all of it based on the true facts of artists who left behind messages in their paintings.

THINGS I LEARNED: Where do I begin? I’ve already mentioned several bits above and to go into any further detail about anything like the Tarasque or the Albigensians or the difference between Eastern European vampires and Greek vampires would rob anyone of discovering those juicy tidbits on their own. The entire book is one huge “I never knew that!” moment after another.

I will, however, mention that I happily became acquainted with the existence of the French poet and novelist Paul-Jean Toulet (1867-1920) whose poem "En Arles" is featured in the narrative. One line "Parle tout bas, si c'est d'amour" immediately reminded me of Kurt Weill's "Speak Low When You Speak Love." The final stanza ends with the phrase "Au bords des tombes" which serves as both the title of the final section and as a resounding image that haunts the treasure seekers who have been literally and metaphorically digging around the edges of graves and cemeteries over the course of the entire novel.

THE AUTHOR: Simon Raven was born in London in 1927. He studied at King’s College Cambridge where he majored in Classics. (He shows off his knowledge of Latin and Greek a lot in The Roses of Picardie). After graduating university he joined the army and served in the infantry in Germany and Kenya where he commanded a rifle company. He began his writing career as a book reviewer in 1957 and published his first novel The Feathers of Death in 1959. Raven is perhaps best known for his family saga of sorts known as “Alms for Oblivion” which feature recurring characters over ten novels spanning four decades. Readers of supernatural fiction might know him for his handful of ghost stories and the novel Doctors Wear Scarlet (1960), a combination of academic satire and vampire tale. Additionally, Raven wrote for TV and movies with teleplay adaptations of Trollope (The Pallisers), Huxley (Point Counter Point), Nancy Mitford (Love in a Cold Climate), and Julian Symons (The Blackheath Poisonings) found on his long résumé.

EASY TO FIND? The Roses of Picardie was published only in the UK.  I found not one US edition since its original appearance in 1980. Paperback editions seem to be plentiful in the used book market. The UK first edition (Blond & Briggs, 1980) is a rarity based on my internet searches. The most recent reprint was a paperback from House of Stratus in 2012. I found no digital editions at all.
Posted by J F Norris at 11:29 AM