The Tuesday Night Bloggers are saluting historical mysteries this month. I don't often read these anymore, but when I come across exceptional examples I tend to write about them here at Pretty Sinister Books. Below is a rerun (originally posted here in 2014) of a highly unusual historical murder mystery which very well may be the very first one to use a historical figure from medieval times as a fictional detective. Enjoy this Autumn rerun. 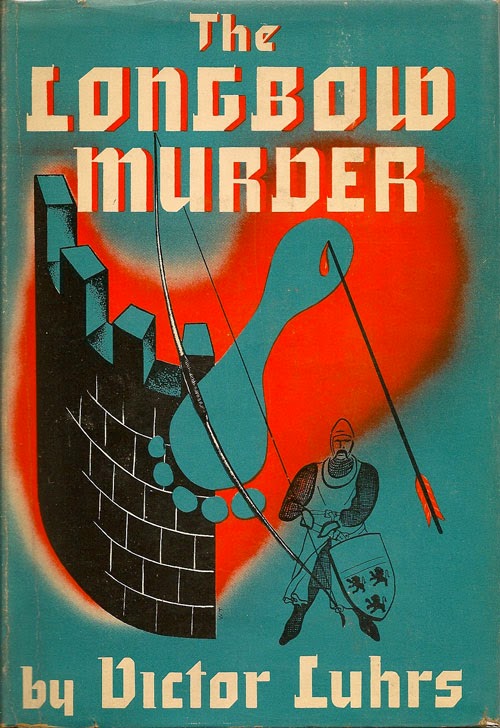 Howard Haycraft, noted detective fiction historian and critic, called Victor Luhrs' debut mystery novel The Longbow Murder (1941) a curiosity. At the time of its original publication the subgenre of the historical mystery was relatively new. Agatha Christie's famous contribution set in ancient Egypt, Death Comes as the End (1944), had yet to see the light of day. The use of a genuine historical figure such as Richard the Lionhearted as the detective protagonist was so unique in detective fiction and perhaps a bit too strange that no other writers followed suit. Now we are fairly inundated with real historical people solving fictional murders. Kings, queens, U. S. presidents and senators, even detective novelists all show up as amateur sleuths in historical mysteries these days. Victor Luhrs, if not the first to do so, was certainly one of the first and sadly completely forgotten as well. Turns out that Coeur de Lion makes quite the clever detective in this novel.

Richard faces a series of murders by poison arrow while at the same time trying to fend off assassination attempts on his own life. With the aid of a simple-minded scribe named Peter of Caen who serves as the Watson of the piece, he ferrets out two separate conspiracies all with traditional detective novel puzzle elements. Two murders are committed in locked and guarded rooms but only incidentally appear to be locked room murders. Some of the evidence and the eventual revelation of collusion by a guard reduce the cleverness of the impossibility Luhrs presents and I have to disqualify it from being considered a genuine "locked room" or impossible crime. Nonetheless, Luhrs is rather ingenious in coming up with a murder method and assassination plot that Richard also uncovers and prevents that rivals the main plot of the actual murder victims.

Luhrs is noted as being an avid medievalist. According to the informative bio sketch on the rear DJ panel he was obsessed with all things of the middle ages from his boyhood and has read extensively about the period in both fiction and non-fiction. That he is a devotee of Sir Walter Scott's Ivanhoe is never in doubt. The plot of The Longbow Murders is heavily influenced by Scott's classic novel of Richard I. Robin of Locksley (aka Dickon Bendbow, aka Robin Hood) even makes a cameo appearance. A custom made arrow stolen from his quiver turns out to be one of the murder weapons. Luhrs' love for the period is also quaintly depicted in his frequent use of archaic language. Some may find it quaint. For me the mix of modern day language and speech peppered with a plethora of methinks, yclept, mayhap, and prithee elicited more frowns than smiles.

There are other touches of quaintness as well as some troublesome anachronisms. One of Luhr's more notable atmospheric period touches is the character of John Star, a wizard who acts as coroner in the investigation. He determines time of death and then retreats to his alchemical lab where he distills the poison from the arrows and identifies it by name. Star often falls into a spell Richard calls "being in the mist", meaning Star can go into a trance-like state. While in this state the wizard seemingly confused confesses to the murders. His "in the mist" state leads to much confusion and Star's inability to distinguish reality from fancy. This "misty" trance seems to be a form of fugue state and he suffers from temporary bouts of amnesia. Star is one of the most original characters in the supporting cast. I only wish he had a larger onstage role. Most of his activity is reported second and third hand. It would have been a lot more interesting to see him interacting with others while in this state rather than hearing of it afterwards.

The solution of the murder, however, while surprising in revealing the murderer's identity is too dependent on a couple of vainglorious notes left by the murderer. The main question is whether they are meant as taunts or intended to frame another person. Both notes teasingly refer to the six letters in the murderer's first and family names. This is the kind of plot gimmick you find in novels by Edgar Wallace or Johnston McCulley who both created a slew of egomaniacal master criminals prone to leaving signature cards, with or without riddles, at the scene of the crime. It seems like a far too contemporary idea for a medieval criminal to contemplate; it bothered me. There are other subtle signs of modern crime solving leaking into this middle age world like trying to determine the exact time of death, alibi breaking, and intermittent use of contemporary phrases and idioms. But I have to say I liked the way Richard swore in medieval style. One of his commonly used oaths is "Holy Virgin!" There are a fair share of "Zounds! and "Gramercy!" exclamations as well and you learn the origin of the word "Good-bye" to boot. Some lapses in medieval verisimilitude were easier to excuse than others. Originality in plotting notwithstanding, the murderer's notes and the evidence of how the medieval alphabet is used in spelling was a bit too much for me to swallow.

Luhrs is also noted in his bio as being a detective novel aficionado. The numerous puzzles he incorporates into the plot make that quite clear. And I can only guess that he read a lot of stories in the pulp magazines. Richard at times adopts the brash and brutal manner of a tough guy private eye beating his witnesses (some of whom are also loyal knights in service to him) by boxing their ears, slapping their faces repeatedly, and once literally kicking ass. He's kind of a Carroll John Daly character of the Middle Ages but also shares qualities of the logical and rational crime solving methods of Ellery Queen and Philo Vance.

The bio hints that Luhrs hoped to write more adventures using Richard I as a detective, but unfortunately this is the only one. My guess is that despite the book's cleverness, its colorful medieval setting, and a larger than life Richard I as the lead, the book probably did not sell well. Luhrs never wrote another novel that I know of, certainly not another detective novel set in the Middle Ages. The only other book I find listed with Victor Luhrs as author is a history of the "Black Sox" scandal during the 1919 World Series.

Copies of The Longbow Murder are out there -- nearly all of them have the attractive DJ with medieval inspired artwork -- but most of them are priced too high for the average reader. Check your local library though. Anyone who enjoys historical mysteries, and those set in the Middle Ages especially, will discover a wealth of entertainment in this well written and cleverly constructed mystery.
Posted by J F Norris at 10:57 AM