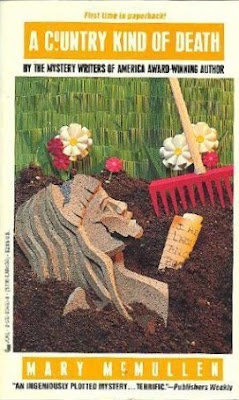 THE STORY: Frustrated Connecticut writer Philip Keane wants peace and quiet so he can finish his latest novel. But his sister-in-law comes for a visit, followed only hours later by an unannounced visit from his brother. The house becomes nothing but distractions for him. But dealing with unwanted house guests is nothing compared to what is on the horizon. His two youngest daughters emulate their father by writing stories based on their own limited life experience. The seven year old writes a story that is clearly a fictionalized account of a heated argument she overheard in the backyard hinting at a murder threat. Her 11 year-old sister is alarmed and thinks she ought to tell their father. But the seven year old clams up for fear of implicating a 19 year boy she likes. When the 19 year old’s mother is found drowned in her goldfish pond the two girls fear for their lives. Will Philip Keane ever get his novel finished now?

THE CHARACTERS: The story may sound gripping from that summary above, but it's all handled sloppily. The main problem is that McMullen litters the story with a large cast of supporting characters and seems more interested in their shenanigans, almost all of which are related to overactive libidos. Sadly, nearly the entire cast is utterly unlikeable. With the exception of the two little girls, the most interesting characters, no one held my interest. I cared not one iota for what they wanted nor why they were in the book.

And why was everyone a writer? Philip Keane writes mystery novels, his brother Patrick is a playwright of “domestic comedies”, the next door neighbor is a Pulitzer prizewinner (!), and his nympho of a wife is attempting to write her husband's biography which only inflames his already ugly temperament. There was an intrusive subplot about Fay and Angus (the husband and wife writers) which amounted to Fay hiding her manuscript in the neighbor’s studio and Angus bursting in every ten pages or so, finding a few pages here and there and destroying them. When Fay isn't hiding her manuscript she's pursuing every available man she can fling a sexual innuendo at.

For some reason no one locks their doors in this Connecticut town and everyone can enter the Keane house at all hours as if it were a frenetic French hotel with doors flying open and shut like those in a Feydeau farce. It was nonsensical.

The story should have been about Kit and Donna who in remaining silent about what they know are largely responsible for covering up the murder of the shrewish Mrs. Mint whose death all the adults want to write off as an accident. But over 80% of the book is devoted to all the subplots and non sequitur interior character monologues of uninteresting adults and whiny teenagers. There is no mystery here at all, by the way. And what little suspense we get is undermined by the garbage subplots of Fay and Angus, and the adult women (and one teenage girl) drooling over the Adonis of the piece -- Patrick Keane, the playwright brother.

INNOVATIONS: None. This novel is a mess. It purports to be a crime novel and it isn’t. It succeeds only as a meager satire of 1970s middle class white suburbia. That McMullen won an Edgar for her debut novel published more than twenty years prior to this astonishes me. What happened? There is nothing of a skilled mystery writer on display here at all. There is no detection, little suspense and few thrills. But there's more than enough repellent behavior and dreary depictions of suburban malaise. Even the finale –- an excessively violent and melodramatic basket of clichés -– fails when the so-called villain of the novel (no surprise as to the identity, BTW) is presented as a certified madman, utterly contrary to the way he was portrayed in the first two thirds of the book. It’s a cheap and inauthentic way to attempt to legitimize calling the book a mystery novel.

EASY TO FIND? Do you really want to track this one down? Yes, there are plenty of copies out there. Understandably so. I imagine most readers couldn’t wait to rid their house of this sad excuse of a crime novel. My copy cost $2 and I’ll be adding it to our weekly bag of thrift store donations. Unless one of you wants it. I’ll gladly send it to you. For free.

This is the first of three 1975 Books I read for the Crimes of the Century meme at the Past Offences blog. The other two books proved to be vast improvements over this one as well as being more representative of 1970s culture and current events – one is a satire on the sexual revolution in the US and the other touches on apartheid and South Africa’s troubles, and both are genuine detective novels.
Posted by J F Norris at 6:15 AM