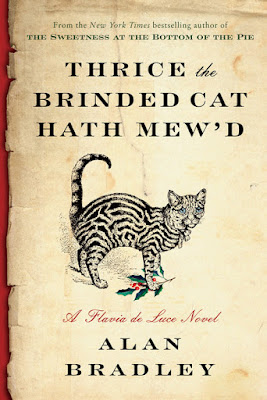 The good news: a new Flavia de Luce book is out. The bad news: she’s aged two decades in a single year.

Alan Bradley originally envisioned this series featuring his precocious girl sleuth and genius chemist to be a homage to the lost culture of Britain and Canada. He wrote intriguing mysteries laced with nostalgic paeans to stamp collecting, a touring puppet troupe, gypsy nomads, and other long gone pastimes and cultural dinosaurs. He said all this in countless interviews when the series first appeared with his award-winning debut The Sweetness at the Bottom of the Pie. But as the series progressed he was forced to reckon with the overwhelming popularity of the character herself and her family. The intriguing cultural aspects did not vanish altogether but they have been pushed aside, sad to say, to make way for the De Luce Family saga. Now in this eighth installment a full year has passed. How do I know? Because Bradley has already written one book about Christmas and this one Thrice the Brinded Cat Hath Mew’d (2016) also takes place just before that holiday. Ergo: a new year. Flavia was supposedly eleven years old in the first book and now she’s twelve. But she resembles more a snarky post-college graduate armed with a bad attitude and a trunk full of verbal assaults than she does the quick-witted, irreverent, little girl of previous books.

The mystery element tends to improve as Bradley has progressed with Flavia’s adventures. As the title suggests, which quotes the well known conjuring sequence in Macbeth, there are hints of witchcraft in the plot. The murder victim appears to have been crucified upside down in his bedroom on a bizarre handmade wooden contraption. The plot uncovers double identities, family secrets, and a villain reminiscent of an old Saturday morning cartoon program rather than an adult murder mystery. The detective work is middling, the mystery not too mysterious, and the finale in which Flavia does battle with the killer ridiculously over the top. Without an intriguing mystery plot that leaves us with characters and our intrepid little heroine, but Flavia just doesn’t seem like herself at all this time around.

Here are some of the several hard to swallow scenes that make it hard to believe that Flavia is still a pre-adolescent girl. 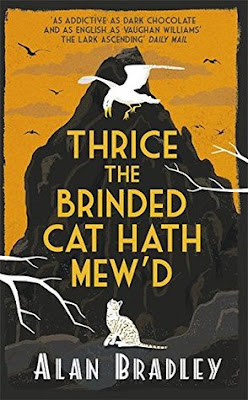 There's more, but I'll stop there.

Her travel to Canada and short-lived attendance at the private girls' school in As Chimney Sweepers Come to Dust (now there was a good mystery plot!) has somehow transmogrified Flavia from smart aleck kid into mean spirited harpy. That this adventure is obviously meant to be her most painful growing experience to date is no secret either. The not so surprising ending is telegraphed several times throughout the narrative as she constantly reminds herself that she should not be investigating a strange death, but rather visiting her father in the hospital where he is languishing from pneumonia.

But along the way Flavia turns into a misanthrope of the worst sort. With the exception of Dogger, the indefatigable servant and Haviland de Luce’s stalwart friend, she can’t stand anyone in this book and lets us know it repeatedly. In all honesty the only reason I continue to read the books is for the scenes between Dogger and Flavia which happen to have the best of Bradley’s writing and reveal him to be a humane and compassionate writer capable of capturing profound moments of much needed gravitas. Thank heaven we get a glimpse of the original Flavia in these scenes.
Posted by J F Norris at 8:56 AM