FFB: Grieve for the Past - Stanton Forbes 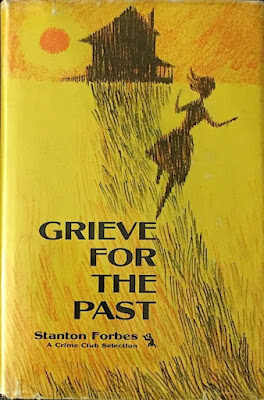 THE STORY: Fifteen year-old Ramona Shaw wants to be a writer. Her literature tastes are eclectic ranging from Hugh Walpole to Ellery Queen. Her dream would be to solve a mystery and write about it. "How about a haunted house?" comes the goading dare from the Coleman sisters. So Ramona heads to what she thinks is the abandoned house in town and meets its sole occupant, Maurice Stone. Over a remarkably brief time she becomes friends with the young recluse. She changes his life when she gets him a job at the local grocer's. With that one act of kindness she initiates a series of adventures she never imagined and fulfills her wish of solving a murder mystery she never dreamed would occur in her quiet Kansas town.

THE CHARACTERS: It's rare for a novice writer to master the difficulty of capturing the worldview of a child without allowing the writer's own adult perceptions to otherwise color the story. But Ramona Shaw, the narrator of Grieve for the Past (1963), is one of the most authentic fictional teens I've encountered in a long time. Though the novel is set in 1930s Wichita it's hard not to draw analogies between Ramona and her easy friendship with the outcast Maurice Stone and the secret relationship that develops between Scout and Boo Radley in To Kill a Mockingbird. There's a lot of Harper Lee in this unusual novel which does not resemble anything like a typical detective novel, even though in the end it very much turns out to be a rather good one. All of the characters leap off the page with detailed and individual personalities and voices from Ramona's policeman grandfather in charge of the horrible ax murder case to Ramona's school friends and all the other adults she meets over the course of the novel. In addition to Ramona and Maurice the many memorable characters include the sinister handyman Victor Tabbot, dissatisfied and browbeaten alcoholic Carl Bragdon, vivacious Betty Vincent who thinks Wichita will never give her what she really wants out of life, Ramona's wise policeman of a grandfather and her kindly parents.

INNOVATIONS: Forbes has managed to weave a sly detective novel plot around this youthful coming of age story in an unexpected fashion. We know that Ramona is very much trying to be a budding detective (as well as a writer); her frequent talks with her Sheriff grandfather remind us of that fact. Still the story takes its time unraveling the mystery of who killed Mrs. Kirsten and her son and if indeed there was a hidden treasure in the house as rumor and gossip led everyone to believe. The story really is about Ramona learning about the way the world works, how a teenager grows up fast when unplanned for violence intrudes into her otherwise innocuous and mundane life, how we take for granted our neighbors, and how we tend to ostracize anyone who doesn't fit our ideas of normalcy. With the help of Maurice (who is considered the prime suspect in the murder), her grandfather, and some adult friends Ramona manages not only to solve the murder she has her entire worldview changed.

There are some brilliantly realized and unusual scenes like when Ramona after leaving a summertime dance makes a detour to a speakeasy courtesy of Mr. Smith who is driving her home. When he finds out she's only fifteen things change from fun to nasty very quickly. The climax takes place at an end of the school year prom that is almost like the nightmare prom from Carrie in reverse. Ramona, an ugly duckling of a girl, is transformed into a beauty for the night and becomes the object of all the young men's attention when before they paid her little notice. One of the young men has some inside information about the ax murders and takes her aside to deliver one of the most surprising denouements in mystery fiction. 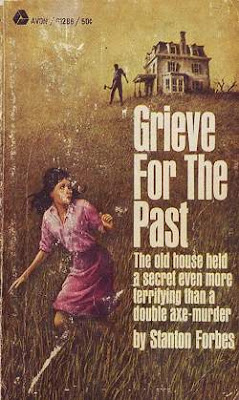 QUOTES: I thought how funny it was that adults seemed to talk all the time about things they knew all about. Never about anything they didn't know. If they talked about what they didn't know, they might find out something.

I smiled but I didn't really like [being called Miss America]. I knew I was no beauty. [...]what hurt most was that sometimes I felt beautiful. It didn't seem fair that I should feel beautiful and not be beautiful.

Betty Vincent: "I'll get out of this Middle Western, middle class, middle- minded rut I'm in. And somewhere out there, there will be somebody. But not here. There's nobody here."

Betty Vincent again: "Money, mon enfant. D-o-l-l-a-r-s. Even when you're old enough you can't do what you want to, and often the reason is money."

Ramona: "You can't let someone kill and get away with it."
Grandfather: "There's many a murderer loose in the world , Ramona. And that's the truth."
I closed my notebook and I never did write a story about the Kirstens' murderer. Was there anything in this world that was the way it was supposed to be? 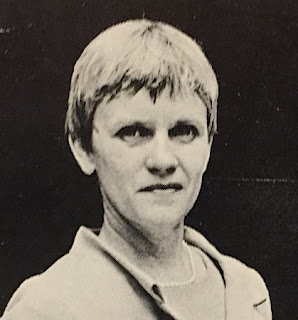 THE AUTHOR: Deloris Stanton Forbes was born in Kansas City, MO in 1923 and was raised in Wichita, Kansas. Her own grandfather was a deputy sheriff making much of what is in Grieve for the Past a fictionalized memoir. She spent the early part of her adult life as a journalist. She wrote for newspapers in Oklahoma, reported crime in Baton Rouge, and finally ended up at a Boston paper when she moved there after marrying her husband Bill Forbes. She settled in Wellesley, MA and covered city government for a weekly community paper while raising her family. In the early 1960s she turned to writing crime fiction and romantic suspense first in collaboration with a fellow journalist and then on her own. Grieve for the Past was her first solo novel using her pseudonym "Stanton Forbes". In the late 1960s she created the character of Knute Severson, a Massachusetts policeman, who appeared in over 15 novels published under her other pen name "Tobias Wells." After living in St. Martin in the Caribbean, where she and her husband ran an apartment building and owned a tourist shop for about 13 years, she finally settled in Florida where apparently she still lives today. Her last novel was published in 2003 and shortly after she retired from writing. She is apparently still alive at 93 years old.

THINGS I LEARNED: Ramona uses Wichita's nickname of "Air Capital of the World" a couple of times. This led me to find out all I could about that claim to fame. Wichita was the center of airplane manufacturing in the 1920s and 1930s. Beechcraft, Cessna, and Stearman Aircraft were among the leading manufacturing companies and the city became a major hub for U.S. aircraft production for over two decades.

One Way Passage starring Kay Francis and William Powell is a movie that Ramona goes to see at one point in the story. It helped me to date the year of the novel's events to no earlier than 1932, the year the movie was released.

EASY TO FIND? Apparently this one is rather scarce. I could find only three copies for sale online, all of them the original Doubleday "Crime Club" edition, also the one I own and shown at the top of this post. There is also an Avon paperback reprint that came out in the 1960s. Forbes' books under both her pseudonyms were very popular during the 60s and 70s and my guess is that you'll be able to find many of them in local libraries throughout the US. I'm not so sure you'll be as lucky if you live in the UK.

More reviews on Stanton Forbes and Tobias Wells are coming later this month. She was a diverse and imaginative crime writer who novels tended towards bizarre plots, quirky characters and highly unusual events the more she wrote. With the exception of her series featuring Knute Severson none of her mysteries are vaguely like one another.
Posted by J F Norris at 9:36 AM