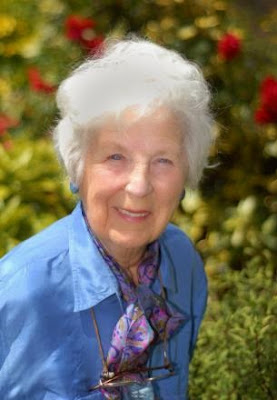 Jean Bowden, whose mystery novel The Fetish Murders written as "Avon Curry" I reviewed here, died earlier this month.  A reader of this blog who apparently was one of her neighbors was kind enough to post a comment on the review for The Fetish Murders to let me know.  Later, in trying to locate her obituary, I found this post at The Gumshoe Site:

Jean Bowden died peacefully on November 04 in London, UK. The former book editor wrote more than 100 novels (ranging from historical to romance to suspense to detective mystery) under 10 different pseudonyms (Jennifer Bland, Avon Curry, Lee Mackenzie, and Barbara Annandale among others) before her retirement on her 90th birthday in 2010. Her first book was non-fiction; GREY TOUCHED WITH SCARLET (1959; reprinted-issued and retitled NURSES AT WAR, 2015) about the true story of the experiences of nurses in the Second World War. As Tessa Barclay, she authored a series about amateur detective Crown Prince Gregory of Hirtenstein, and the last Gregory novel, DIAMONDS IN DISGUISE (Severn 2010), was also her very last novel. She was 96.