Another re-post from the archives.  This week I'm re-running a review of a unique historical mystery book, actually a collection of detective stories set in Revolutionary War era America, as part of the continuing month-long salute to history and mystery for the Tuesday Night Bloggers. 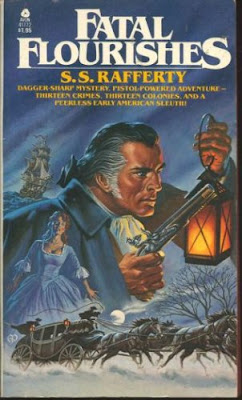 Captain Jeremy Cork first appeared in "The Margrave of Virginia" in the August 1975 issue of Ellery Queen's Mystery Magazine. Further exploits of this 18th century inventor, speculator and amateur sleuth of "social puzzles" would appear over the next year and half. Eventually author S.S. Rafferty penned one adventure with Cork and his yeoman financier Wellman Oaks for each of the original thirteen colonies. All thirteen stories were collected in a rather scarce, but nonetheless noteworthy, book called Fatal Flourishes (1979).  It was later reissued as part of the "Library of Crime Classics" imprint by International Polygonics under the title Cork of the Colonies (1984).

Like Lillian de la Torre's detective stories about Samuel Johnson and Boswell Rafferty's tales are loaded with 18th century history and lore. But unlike the Johnson stories Captain Cork is an entirely fictional creation. Described by his sidekick as "six foot six inches of insouciance" Cork is similar to many of the Holmesian inductive detectives in that he almost immediately knows the solution, alternately challenges and rebuffs Oaks, his long suffering Watson, and indulges a bit too much in his own vanity. The cases he stumbles across which he prefers to call social puzzles involve a variety of crimes from theft to murder and include a handful of puzzling elements ranging from mildly diverting to devilishly ingenious.

Each story has the additional feature of focusing on some little known aspect of pre- and post- Revolutionary War era America. You'll learn of South Carolina's Charles Town as a sort of 18th century Las Vegas with parties, drinking and hedonism on display 24/7. The highlight of the story is that state's strange ritual of the cicisbeo lottery, an 18th century game of gender role reversal borrowed from the Italian aristocrats, in which married women draw names of single men to be their Cavalier Servente for one week. "The Georgia Resurrection" deals with vodo (Rafferty's spelling), African superstitions, and tribal herbal medicine. You'll also learn about the execution practices of that colony and the differences between the duties of hangman and coffin maker. He even gives us the origin of the now too familiar horror icon -- the zombie, or zombi as Rafferty spells it. No eating of brains in sight which may come as a huge disappointment to some 21st century zombie fans.

For me there was also an abundance of new learning related to life in the original colonies. I always thought that the big cash crops of the South were cotton and tobacco. Rafferty tells me, however, that it was rice and indigo that were making the colonists all their money. There was frequent talk of slavery and the treatment of slaves (Cork is an abolitionist) and in one story, "The Witch of New Hampshire," slavery is at the heart of the disappearance of several young women in a town still clinging to century old superstitions. 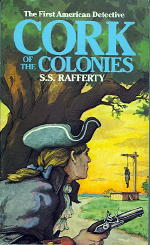 As for those "social puzzles" we get the usual tricks of the mystery writer's trade: twins, locked rooms, switched weapons, and some valiant attempts at misdirection. However, there is little fair play technique to be found here. The reader is left feeling as astounded as Oaks when Cork pronounces his solutions in his usual matter-of-fact style when not one clue was ever presented. It is more Cork's behavior and personality that dazzles and entertains rather than the construction of the puzzles and mysteries.

One of the most involved stories is "The Curse of the Connecticut Clock" which features an overly complex cipher based on the musical scale and the Roman numerals on a clock face. The explanation of the code takes up four pages! You have to admire the ingenuity behind the devilry but it seemed more like an ostentatious display by a 20th century writer rather than the revelation of the 18th century imagination of the character who created it.

Historical fiction fans will revel in the detailed portraits of colonial life, the colorful characters, and Captain Cork himself – a combination rogue and savvy businessman who finds much to fascinate him among the criminal element as he travels from North to South.
Posted by J F Norris at 12:30 AM