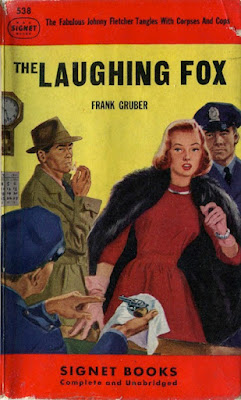 THE STORY: Small time con artist and traveling book salesman Johnny Fletcher and his business partner muscleman Sam Cragg cross paths with gambling gangsters and the fox fur trade in The Laughing Fox (1940) when they book a room in a hotel near the Cattle Congress in Cedar City, Iowa. After inviting a down on his luck furrier to share their hotel room they take his five bucks (the cost of the room for one night) and treat themselves to steak dinners. When they return they find their guest dead in the bathtub and a black fox running wild in their room. Fletcher turns to playing detective to clean up his already tarnished reputation and escape adding a murder charge to his long string of petty crimes while Sam goes along for the crazy ride.

THE CHARACTERS: Johnny Fletcher may be a clever book salesman with an arsenal of manipulative tactics that help him sell boxes full of Every Man a Samson, a self-help book on how to gain a muscular physique, but he always seems to be running out of money. To supplement his ever dwindling income he resorts to clever cons as well as indulging in horse race betting and gambling at crap games. Sam Cragg, his partner, is really nothing more than a living prop. While Johnny hawks the books and does his spiel about how every man can become a he-man, Sam strips to the waist and goes through a series of Mr. America poses and does a strongman routine by breaking chains strung across his massive chest and showing off with some weight lifting shtick. A few people see through the fakery of the act but most of the time the duo succeeds as they do at the Cattle Congress when they successfully sell two cartons of the books to a gullible crowd of geeky farmers. 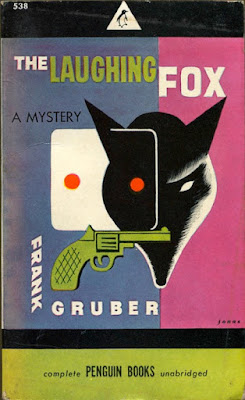 The supporting cast includes temperamental policemen and a gaggle of gamblers who seem straight out of the pages of Damon Runyon. The cops all have ugly German names ( Chief Fleishacker and  Sgt. Holtznagle) while the con men sport monikers like No-Dice Coons and Lord Mike Seymour. Among the fox breeders and furrier tradesmen there are two lovely dames that flare up Johnny's appreciation for the female form. Jessie Thompson is one of those women and when her fingerprints turn up on a gun used in the killing of Alfred Orpington the police set their eyes on her as Suspect #1. Johnny is determined to prove her innocence while also trying to clear himself of murder as an unwilling accessory. The body, after all, did turn up in his hotel room.

As the story unfolds we learn that one of the fox breeders - Wallace Erb - is the uncle of a boy who disappeared twenty years ago. The case of the missing Chester Erb was never solved. The verdict is still out on whether Wallace did in his nephew in order to gain control of the Erb fortune or whether Chester managed to build a new life for himself under a new name in a different state. There are clues that support both stories. And when someone claiming to be Chester turns up at one of the crap games run by No-Dice Coons, Johnny 's detective instincts kick into high gear. He goes on a sleuthing mission that takes him to Chicago to find out the truth behind Chester Erb's disappearance.

INNOVATIONS: This is a comic crime novel that reminded me of two great masters of that subgenre. It's intentionally farcical most of the time and the gambling types cannot help but remind one of all those slang infected characters from Guys and Dolls and Runyon's many stories of Broadway and Times Square of the 1930s. Gruber also shows off his cynical black humor that recalls the madcap often gruesome murder romps concocted by Craig Rice. 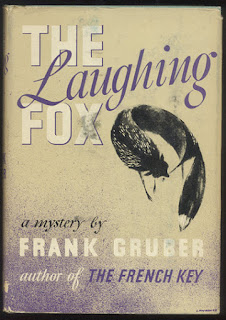 Additionally, Johnny Fletcher's mix of breaking the law and solving crime belongs to the school of the rogue detective and all the gentlemen thief characters of crime fiction from Raffles to Simon Templar, from Nick Velvet to Dortmunder and his gang. That Johnny will often take advantage of the pulp fiction love of private eye stories and pretend to be a private eye himself in order to get information underscores the con artist element in this series.

THE AUTHOR: Much has been written about Frank Gruber, one of the most prolific of pulp writing "fictioneers". He covered it all -- detective stories, westerns, thrillers, comic crime, spy novels, adventure stories. Pick a genre, any genre. Chances are Gruber wrote a handful of stories or novels in each category. During his more than five decades as a professional writer he counts a stint as a reporter for five different farming magazines when he lived in Iowa during the 1930s. The Cattle Congress and most of the characters who attend that agricultural show are surely based on his own experiences during his Iowa years. Most interesting to me in The Laughing Fox is the inclusion of Judge Orrin, a crooked editor of a self-published journal who extorts advertising in exchange for favorable livestock ratings and blue ribbons at the fairs. I wonder if he was based on someone Gruber knew back in the day. There's crooked business wherever you go, I guess.

THINGS I LEARNED: I had no idea that fox breeding was such a popular trade decades ago. Coincidentally, I've been reading a lot of mystery fiction from the 40s and 30s in which women are decked out in fox and sable stoles. Fox fur, especially the glamorized silver fox, was apparently a very hot item prior to WW2, maybe afterwards too. The climax of The Laughing Fox takes place during a fox fur pelt auction that ends in an unexpectedly violent manner.

New gambling lingo I picked up: Tops are loaded dice that will roll only high numbers. A sheetwriter is the guy in the room who keeps track of each person's bets and the money played out. 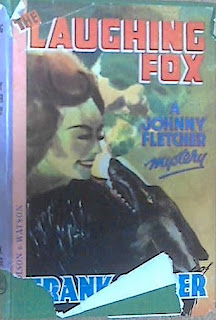 EASY TO FIND? Unexpectedly, there are lots of hardcover editions of this book for sale while the paperback copies (four reprint editions I know of) are extremely scarce. This may be because The Laughing Fox's second paperback edition was one of the odd Penguin/Signet combination editions that included a DJ. Paperbacks with DJs have been extremely scarce for many years now and have always been a desirable item for collectors and sellers. When they do turn up for sale the prices tend to be very high. Currently there are close to fifty, mostly hardcover, copies for sale including one in French. Mysterious Press and Open Road Media have reissued in digital format a few Frank Gruber stories that originally appeared in Black Mask, but I found none of the Johnny Fletcher stories or novels among those eBooks.