IN BRIEF: The Case of Naomi Clynes 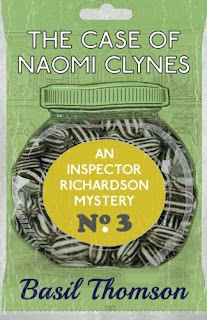 Basil Thomson is a writer I had no interest in reading until I came across TomCat’s review of The Case of Naomi Clynes (1934), the third case for Thomson’s perfunctory detective Inspector Richardson. The story of the investigation of an apparent suicide is soon proved to be very suspicious. Evidence shows her body was most likely dragged across the floor and placed with her head in her kitchen gas stove. Autopsy reveals poison in her system. Dogged investigation leads the police team and his unlikely colleague, a publisher of the dead woman’s detective novel, to France where they uncover an intricate plot involving impersonation, forgery, and a plot reminiscent of Victorian sensation novels replete with wicked guardians and imperiled heirs.

The story is told in a matter of fact manner, highlighted with a healthy sense of humor, some pointed satiric touches, and plenty of good old fashioned detection. Thomson has an imaginative streak in coming up with unusual clues like threads found on a protruding floorboard nail that match the dead woman’s clothes that serve as the foundation for the murder theory. The most clever of all is a cancelled postage stamp. Dorothy L. Sayers was greatly impressed that Thomson managed to spin such an ably constructed and complex plot out of something so seemingly insignificant. And I have to agree.

Apart from the skillful way in which Thomson turns the investigation of a burgeoning mystery writer’s strange murder into a Buchanesque pursuit thriller the most fascinating part of the novel is how Thomason teaches the reader about the differences between how police investigations are dealt with in the US and the UK. With the arrival of the publisher’s uncle who travels from America to England in order to help his nephew there follow several passages in which Thomson discusses the process of trial and punishment in both countries. The uncle is very critical of the US form of justice and sees it as a terrible cycle of repeat offenders being jailed, serving their time, freed on parole, and invariably caught and tried again when they return to a life of crime. Recidivism, apparently, was just as much a chronic problem in the 1930s as it is now. Some things never change.

For me Sir Basil Thomson’s life is much more interesting than his fiction. I think I’d prefer his biography over his fictional creations as lively as they can be. Martin Edwards’ introduction gives us not only a fine overview of Thomson’s eight detective noels, but also a taste of this remarkable man’s life. We discover his varied career path took him from foreign service in the South Pacific to British civil service to law enforcement ending as a knighted Asst. Commissioner of the Metropolitan Police in the post World War 1 era only to have his life almost ruined by a shameful incident that remains a hazy blur of half-truths, hearsay and sensationalized rumor. Was he guilty of consorting with a prostitute in public? Was only partially guilty? Was he completely innocent? We may never know now.

The Case of Naomi Clynes along with the other seven detective novels by Basil Thomson have all been reprinted by the admirable Dean Street Press. They are available for sale directly from the publisher's website and through the usual online bookselling sites in both paperback and digital versions.
Posted by J F Norris at 4:21 PM