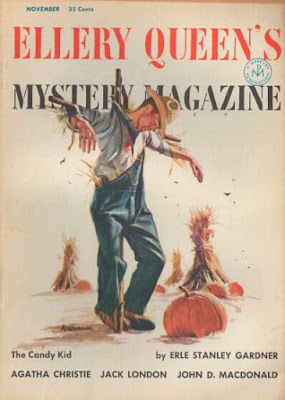 In my mad obsession with the year 1954 for Past Offenses blog's monthly Crime of the Century meme I've completely immersed myself in writings from that year. This issue of EQMM was brought to my attention when I read that it included a story by L. Frank Baum reprinted for the first time since its original publication in an obscure magazine at the turn of the 20th century. TomCat, our resident locked room/impossible crime enthusiast, mentioned Baum's "The Suicide of Kiaros" as one of the stories he came across in a different locked room mystery anthology. Of course I had to track down a copy of the magazine. Luckily , I found a copy on eBay (why don't I have this kind of luck in casinos?!) and managed to make an offer for a price I thought more suitable for a 50 year old magazine. And when I pored over the table of contents what did I find but a more fascinating serendipitous discovery. The very first story by William Link and Richard Levinson, creators of Columbo and many other TV crime dramas and movies, when they were only 20 years old and still students at the University of Pennsylvania.

As readers of EQMM might know each first time writer's story is accompanied by a brief intro by the editors giving some biographical info on the writer and how the story came about. In the case of Levinson and Link the bio is longer than usual and filled with tidbits that you most likely will not find anywhere else on the web whether it be their separate IMDB.com pages or the Columbo tribute website. I learned that they knew each other since junior high in Philadelphia and became a writing team as early as their teen years. While still in high school they wrote and produced a musical comedy "that was so great a success that both were inspired to pursue a writing career." Having their first taste of "show business" the two college boys went on to write radio scripts in college and humor pieces for the UPenn humor magazine as well as detective short stories. They probably never imagined that their writing hobby would eventually lead to a career as the leading mystery writing duo of TV just under twenty years later.

"Whistle While You Work" is a neat little tale of a henpecked mailman who everyday looks forward to leaving his claustrophobic household dominated by his shrewish wife. Over a period of days a series of weirdly addressed letters in blue envelopes with black borders turn up in his mailbag all addressed to women. Later each woman who received such a letter is found brutally murdered. It's kind of a James Thurber meets James M. Cain story displaying a mature voice, an ironic sense of humor, and some keen insight for a couple of 20 year old college boys. If I were to give you the story to read and you knew nothing about the writers you'd imagine each might be a cynical old 50-something who had his fill of harpy of a wife.

The L. Frank Baum story is also a crime story rather than a detective story. It presents the life of a brazen bank teller with a gambling addiction and a taste for embezzlement who seeks out the help of a money lender to help him pay his debts and cover his "loans" from the cashier's till. He seizes an opportunity to make off with a sizable amount of the moneylender's cash only after resorting to murder. He then cleverly seals up the room and makes the crime look like suicide. Does he get away with it? The unusual ending -- especially for a story written in 1897 -- probably made jaws drop. I'm sure the story was shocking and considered tasteless and immoral by Baum's contemporaries. 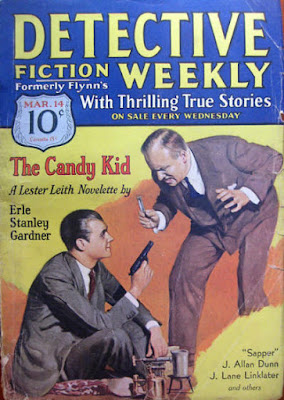 Included also in the issue are a familiar Hercule Poirot story about poisoning and an unusual murder method ("How Does Your Garden Grow?"); a Lester Leith story ("The Candy Kid", first published in 1931 in Detective Fiction Weekly) featuring Erle Stanley Gardner's version of the urbane, wealthy playboy sleuth popular in the pulp magazines long before he created Perry Mason; and stories by John D MacDonald, Charles B Child and Peter Godfrey. I particularly liked an odd puzzle story by Laurence Blochman ("The Man with the Blue Ears") in which the reader is asked to find 18 intentional mistakes within the story. Some of them were easy to spot like knowing that lapis lazuli is a blue gemstone not a red one or that Washington and Lincoln appear on the $1 and $5 bills not Jackson and Hamilton. But lots of the errors like the mention of Pisco punch being made with Brazilian brandy (it's made with Peruvian brandy) or "a .32 police positive" (it should be a .38) went right over my head. Van Deen test for bloodstains? If you work in a forensic lab maybe. A regular Joe Reader knowing this? Probably not. Apparently Blochman, whose adventure thrillers and detective novels set in India I know very well and recommend highly, wrote a series of these type of "Spot the Mistake" stories for EQMM during the 1950s. This is also one of EQMM's more literary issues with reprints of two crime stories by Jack London and Roald Dahl ("Only a Chinago" and "Taste",  respectively).
Posted by J F Norris at 9:41 PM