FFB: The Cat and Fiddle Murders - E. B. Ronald 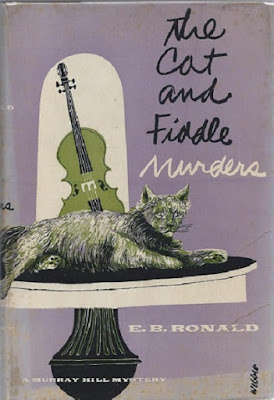 THE STORY: Rupert “Brad” Bradley has been hired to find out who is spending time with the wife of night club impresario and antiques collector Arthur S. Barlowe. Bradley takes a single night to complete this easy shadowing job and reports back that Barlowe's wife Elaine is two timing him with Donaldson, his business partner. But the night Bradley wants to deliver the news he discovers that the "Cat and Fiddle" security guard has been coshed and the prized Guarnieri violin kept on display in the night club has gone missing. A search for the violin turns up the dead body of a musician in one of the several employee boarding rooms. Now Bradley is tasked with locating the missing violin and clearing his name as a suspect in The Cat and Fiddle Murders (1954).

CHARACTERS: Bradley talks and behaves like an American private eye borrowing his shtick from the pages of Chandler and all his imitators. But his syntax and vocabulary give him away as a bona fide Brit. Why the phony American talk and passable accent? He apparently has spent time in Missouri for a while and picked up the lingo and the accent while living there. He finds it somewhat to his advantage to pretend to be a Yank. I guess this was the writer’s attempt at wry or ironic humor but it all felt unnecessary and a bit cheap to me. Imagine a Marlowe-wannabe uttering a sentence like this: No one in the US talks like that especially a private eye in a novel. He insists that everyone call him Brad rather than Rupert a name he obviously hates calling it “his mother's idea.”

He’s not an unlikeable guy this “Brad” Bradley nor is he incompetent as a detective. But nothing really distinguishes him from the dozens of private eye clones in the post WW2 era, either Brit or Yank. He peppers his speech with the usual smart aleck’s patois, he has a weakness for the ladies yet will insult the more forward of the loose women he meets, and he does yeoman work as a detective. The case involves not only a stolen violin but a cache of diamonds purportedly part of a 16th century necklace that belonged to a courtier of Louis XV. The whole plot smacks of a Maltese Falcon rip-off with the diamond necklace acting as stand-in for the Black Bird; the "Cat and Fiddle" impresario Barlowe serving as a Casper Gutman clone, and Elaine and Donaldson’s shenanigans echoing the Spade/Archer/Iva imbroglio.

Some of the supporting players are worth mentioning so I’ll give nods to the violin expert Professor, a nicely etched portrait of the absent-minded savant; his waspish daughter Jackie, quick with a caustic comment for any of the poseur antique collectors she disdains; Benson, the lummox security guard whose doltish ineptitude provides some comic relief; and the alternately affable and supercilious headwaiter Francis Walters. 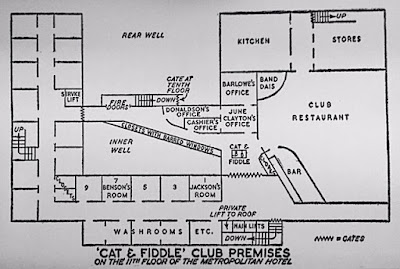 INNOVATIONS: The plot aspires to a locked room/impossible crime novel, but fails to carry it off. The floor plan of the "Cat and Fiddle" points out the various gates that prevent anyone from entering during its strict hours of 7 PM to 3 AM. The writer goes out of his way to explain that there are only two keys that will operate those gates, one in the hands of the owner and the other with his security man. The guard's key is taken from him and remains missing for much of the book but then turns up later in an obscure hiding place. The hiding place of the violin is not much of a surprise and the ostensible puzzle of how the thief got out of the club without being seen is presented as a baffling impossibility until conveniently someone notices something that any reader would've called out as obvious. There's also a lot of talk about the one elevator that is supposedly the only method of entry into the club yet as the story unfolds (and as any reader can tell by the floor plan) that is just not true. In creating this nearly impenetrable night club and his attempt to make it seem like there was an impossible theft and escape Ronald bungles the whole thing.

QUOTES: A sampling of the more nasty side of Bradley's tendency to crack wise


"What do you want me to do? Tell you you're beautiful, fired with the spirit of youth, desirable and that we could make sweet music together? It's all kid stuff. Grow up. Just because you've read a few books on birth control doesn't mean you've got to go to bed with every presentable man you meet."


THE AUTHOR: “E. B. Ronald” is the pseudonym for Ronald Barker, a publishing executive and writer, who penned a handful of private eye novels all featuring Bradley. I haven’t read any of them other than this one , but I suspect that they all have this quasi-American flavor to them even though all of the books are set in England. For more about Barker see my review of Clue for Murder, a non-series mystery and the only detective novel he had published under his own name.

THINGS I LEARNED: Loads of history on the Guarnieri dynasty, an Italian family of violin making geniuses who lived between the 17th and 18th centuries when luthiers were considered demi-gods in the music world. I learned that a Guarnieri violin is much more prized than a Stradivarius or an Amati, especially if it was designed and built by Bartolomeo Giuseppe, a third generation luthier of the Guarnieri family often referred to as “del Gesu”.

There is a legend related about the diamonds and the necklace that turn out to play an important part and the underlying motive in the several crimes and murders. I don’t know if this is a real legend or if Barker made it all up. It was a good little tale nonetheless. Could be the basis for a novel in itself.

EASY TO FIND? The US edition is relatively scarce as I thought it would be with about six copies for sale from various online sellers ranging in price from $6 to $25. Most of them have dust jackets. Exactly half of that number are offered in the original UK edition. I also found one German translated edition given the not so interesting title Nachtklub im Hochhaus (Night Club in the High Rise) that calls attention to the fact that the “Cat and Fiddle” night club is on the eleventh floor of the Metropolitan Hotel but would never signal to me that the story is about crime or detection.

Though most of these copies are relatively cheap I really can’t recommend this one. There is nothing that makes it stand out as exciting or innovative unless you’re interested in learning about the arcane world of antique violins.

This is one of three novels I've read for the Crime of the Century meme sponsored by the Past Offences blog. For this reading challenge each month participants read books published in a specific year. The books read in August come from 1954.
Posted by J F Norris at 12:00 AM