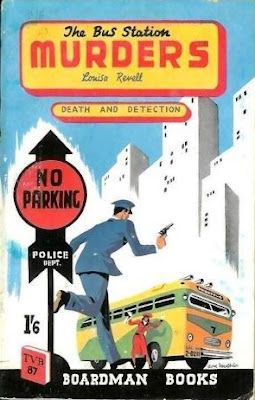 Sometimes I am introduced to an author through a very unorthodox method. Take for instance my latest discovery – Louisa Revell. I found a very interesting paperback edition of The Bus Station Murders (1947) published by T. V. Boardman, a UK outfit primarily known for their “Bloodhound Mysteries” imprint in hardcover. These books are almost exclusively private eye novels, mostly by American writers, and if not actually about a private eye tend to be of the hardboiled or semi-tough genre. Boardman published the work of Henry Kane, Fredric Brown, Thomas B. Dewey, and Lionel White and many others whose work is exemplified by dark impulses and violent crime. Judging by the attractive cover art, much of it modeled on the "GGA" (Good Girl Art) style of American paperback originals, they seemed to market the imprint to a male audience. Boardman, however, published very few books by women mystery writers. Only Dolores Hitchens comes immediately to mind, but her excellent private eye novel Sleep with Slander fits their model perfectly. Why then did Boardman choose to reprint Louisa Revell’s book? Not just one, but three of them. They aren’t private eye novels and they are far from hypermasculine.

Louisa Revell’s series character, Julia Tyler, is a 68 year-old retired Latin teacher who has read way too many detective novels and she likes to remind the reader of that very often. The first book in the series is flooded with references not only to fictional detectives and their authors but specific titles which Julia, her great niece Anne, and Anne’s husband Dick Travers talk about with the enthusiasm of today’s comic book fanboys. Since Boardman chose to publish The Bus Station Murders I thought it might be something along the lines of D. B. Olsen’s very bloody mysteries depicting ax murders and violent shootings. Louisa Revell’s style of mystery, however, is as far from Olsen’s gory “pseudo-cozy” as she is from the private eye subgenre. She turns out to have chosen -- of all people -- Leslie Ford as her model detective novelist. References to Ford far outnumber any mention of Hercule Poirot, Mary Roberts Rinehart or Mignon Eberhart who are frequently talked of in the series. That Julia Tyler’s relatives live in Annapolis and the first two books are set in the American southeast may not come as a surprise to readers who know Ford’s books with their Washington DC, Maryland, and Virginia locales. 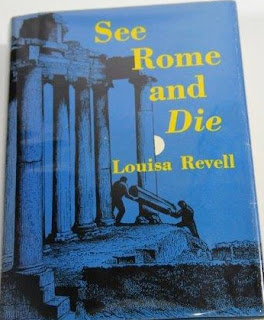 Further research turned up the true identity of Louisa Revell. She was Ellen Hart Smith, an academic with a background in Colonial American history. Under her own name she wrote Charles Carroll of Carrollton, the first notable biography of that member of the First Continental Congress, signer of the Declaration of Independence, and first United States senator for Maryland. Throughout the 1950s and 1960s Smith also wrote numerous book reviews on eighteenth century biographies and histories for Maryland Historical Magazine, the journal for that state's historical society. She apparently lived in Maryland for most of her life where she may have been employed by a university but I have been unable to confirm that. I do know that she retired to Owensboro, Kentucky. Is it any wonder that a historian concerned with pre- and post-Revolutionary War era in the American South and an obvious interest in the rigid structure of the naval community in Annapolis would gravitate toward the mysteries of Leslie Ford?

Smith’s knowledge of life in Annapolis, the presence of the navy wives who dominate that society, and the intricacies of naval etiquette form the background of The Bus Station Murders. Like Ford she is very much concerned with the artifice of the American Southern aristocracy, the class and servant issues that betray a South still clinging to its antebellum past and trying to reconcile its racial prejudices. Julia Tyler is a strong personality -- opinionated, slightly snobby and unapologetic in her intolerance for the hypocrites of the world. Oddly, she often resembles those whom she is attacking with her dismissive exclamations. “I didn’t really care for him,” “What an idiot!” and similar thoughts are openly admitted throughout the narratives of the first three books. Her disdain for hypocrites is contrasted by her attraction to unusual personalities. Often she surprises herself when she is enamored of people whose charm may in fact be a cover for a darker personality. Had it not been for her forthright nature in discussing her own contradictory personality in choosing who appeals or doesn’t appeal to her Julia might have become utterly intolerable herself. Strangely, I found that Julia Tyler grew on me the more I read of her adventures. 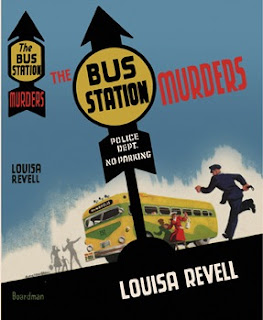 The Bus Station Murders though published in 1947 takes place during the final months of World War Two. This debut novel is a fascinating read for its portrayal of America at wartime. Even passing references to American culture enliven the book with a wartime verisimilitude not often found in mystery fiction of this era. A visit to a movie theater showing the Bob Hope movie The Princess and the Pirate released in 1944 firmly dates the book’s action. The navy and its tacit societal etiquette are aspects of the novel that perhaps only someone of Julia Tyler’s make up could write about so intriguingly.

When a naval officer’s widow is stabbed on a bus Julia finds herself suspected of the crime along with all the other passengers. The murder investigation allows Julia to meld her passion for fictional murder with real murder. She and Anne and Dick spend their time discussing the peculiarities of the crime (e.g. the murder weapon is a steel knitting needle), the all too convenient coincidences tying several passengers to the murder victim. Interestingly, Julia’s gut instincts about a couple of the passengers dismissed by Inspector Ben Kramer as not being real evidence ultimately prove to be correct. Had the stubborn police officer taken her advice and followed up on her hunches the other deaths that followed might easily have been prevented.

Julia is perhaps the epitome of what an amateur detective should be in fiction. Having no real encounter with real crime but relying only on the fanciful stories of mystery writers she follows the tenets and practices of her favorite characters. With an inquisitive nature and a forthright yet slightly devious way of asking prying questions she gathers information and sifts through the chatty anecdotal dialogue that makes up the bulk of the book. But she doesn’t ever really come to any conclusions. She may be the narrator, we may get to know all the characters through her often patronizing point of view, but as a detective she is unsuccessful. She has hunches but is always missing something important – usually a motive. The cases are always solved by someone else in the story. 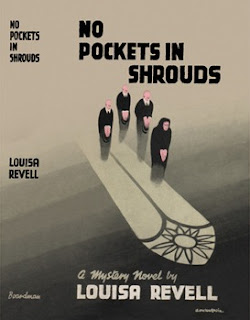 If there is any real fault in this series it is a tendency for Smith to use Julia as her spokesperson on every topic that arises. There are flippant remarks about air travel, jibes on the existence of tramps, chit chat about designer clothing and dog breeding. While some of her remarks are often amusing the abundance of them tend to distract from the main story. Julia is not the only one who veers off into garrulous non sequiturs and tangential commentary. No Pockets in Shrouds has a dentist being asked a simple question during a murder inquest. In response he delivers a four page lecture on the history of the use of sodium fluoride in American drinking water. Four pages! From that I learned more than I ever wanted to know about the soil make-up and the agricultural practices in Deaf Smith County in Texas but also that sodium fluoride had been used as ant poison for decades. But the lecture is not entirely arbitrary. The murder victims in that book have, of course, been poisoned with sodium fluoride.

Fans of female detective characters like Maud Silver and Grace Latham will find these mysteries to their liking. Even if Julia is not exactly the best of sleuths she has proven instincts and her observations about human nature have a contemporary American flair that still rings true. And it is hard not to take a liking to her very American sense of humor and the unexpected moments where she lets her guard down and we see her compassionate humble side. 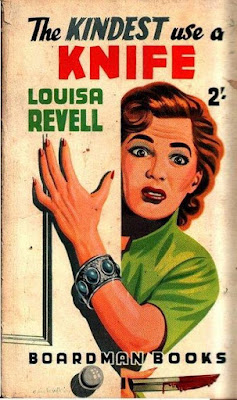 More on Julia Tyler will follow when I write more specifically on each of the three books I’ve read so far. Most of these books were published in both the US and UK with only the UK editions reprinted in paperback editions. Some titles are more easily found than others, but none are currently available in modern reprint editions or eBooks that I know of.