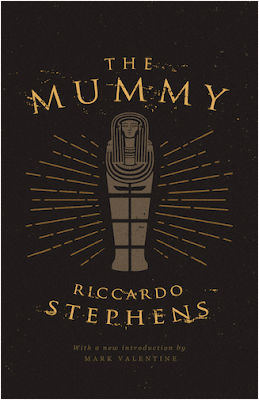 Believe it or not, during the late Victorian and early Edwardian eras there was another Scottish doctor who turned to writing novels, some of which were detective novels, some mainstream and two with elements of the supernatural. His name was Riccardo Stephens and like Arthur Conan Doyle he set up practice in Edinburgh but moved on later to northern Scotland prior to serving as Captain in the Royal Army Medical Corps during World War One. His writing career lasted from 1896 to 1912 and he died in 1923 at the age of 63. His last novel, The Mummy (1912), is an unusual blend of detective novel, occult thriller and the mad scientist novel. Those looking for some- thing similar to a Universal horror movie with a revived mummy hunting for his reincarnated lover will be sorely disappointed. This mummy barely makes an appearance in the novel, though the mummy case is very active.

The novel is narrated by Dr. Armiston (no first name ever given) who becomes involved in the deaths of two men, both of whom die under suspicious circumstances in their homes. Both men had been host to a mummy that because of a strange wager has been making the rounds in several private houses for a period of two weeks. So far each man who has hosted the mummy has died. The bet was dreamed up in order to scoff oat the curse attached to the mummy, but in light of the deaths it seems to be true. Inexplicably, the group insists on continuing with the ritual of hosting the mummy. Dr. Armiston is asked to join the group after serving a consultant in finding the causes of death for the two men.

The bet was begun by a subset of a group known as the Plain Speakers, a private social club whose members enjoy the luxury of uninhibited truthful conversation on any subject. The only rule being that all talk must be straightforward - plain spoken - with no habits of evasion, circumlocution so often resorted to in polite society when one is faced with potentially embarrassing topics. The subset of these Plain Speakers are known as The Open Minds and they gather in secret to tell stories of unusual encounters with paranormal and seemingly inexplicable events. When Professor Maundeville tells a tale of his mummy and the s curse it seems to carry one of the members devises the bet that each man must live with the mummy under his roof for a fortnight in order to dispel the supernatural legend and prove Maundeville wrong. The host is selected by dealing out a deck of cards and the one who ends up the ace of spades takes home the mummy for two weeks.

This is the crux of the plot but it is not at all the real meat of the book. Stephens uses an incident so well known to readers of Sax Rohmer's thrillers as a skeletal framework for a novel that is more concerned with ethics in medicine, the fad of miracle drugs, and the desire for long lasting youth well into middle age. Other topics raised include respect for antiquity, the responsibility the living have for the dead and the ethics of archeological digs that one character likens to culturally supported grave robbing.  As is usual with novels of this era there is a woman at the center of all the trouble as well and jealousy and obsession play a big part in the melodramatic moments towards the finale. For a while I was certain he was going to pull something along the lines of She Who Sleeps, but I was letting my imagination run away with me. While Stephens is at first tempted by the occult his ultimate aim is much more grounded in a harsher reality than any of the lurid plot tricks of Sax Rohmer.

Reading the novel is a constant surprise for the title seems to have nothing to do with what Stephens is really after with his characters. Armiston and Professor Maundeville become the focus with the professor increasingly taking on a sinister aspect. He seems to have uncanny talent for magic and performs breathtaking illusions at a birthday party to the delight of the children but unsettling Armiston who sees it as an almost supernatural gift.  When Maundeville begins to talk of his experiments in rejuvenation and strength enhancing drugs Armiston finds himself becoming seduced to "the lure of the hypodermic".

It seemed to me that this summer the prolongation of life became what I am inclined to call more shriekingly fashionable than ever. To turn one's face to the wall and die decently seemed the last thing possible.


There is a large section of the novel devoted to Armiston's reactions to the quack remedies and patent medicines being hawked. Advertisements for miracle drugs are inescapable and he remarks that everyone is being told they are ill or suffering from some complaint. Armiston is disgusted by it all. The physician's responsibility for maintaining health and encouraging wellness seems to have disappeared overnight from medicine. All has been replaced by talk of disease and illness, the possible cure for any ailment or the alternative of death. It's a powerfully resonant scene for a modern reader who is also assaulted with TV and magazine ads for every prescription drug under the sun.

The Mummy has been long unavailable and is one of those books that has achieved ultra rare status in the used book market.  In this 21st century renaissance of reissuing extremely hard to find books Valancourt Books has once again rescued a noteworthy novel from Limbo.  The Mummy is their latest reprint and can be purchased in handsomely designed hardcover, paperback and digital editions. This new edition, the only reprint in nearly a century, includes an informative introduction by Mark Valentine covering almost all of Stephens' work with some enticing details on four of his other novels. For those who like their genre fiction unclassifiable I highly recommend this unusual book. A mix of detection, other worldly mystery, and social criticism The Mummy is an extraordinarily resonant book in our age of the relentless pursuit of the fountain of youth, both literally and metaphorically.
Posted by J F Norris at 12:03 AM