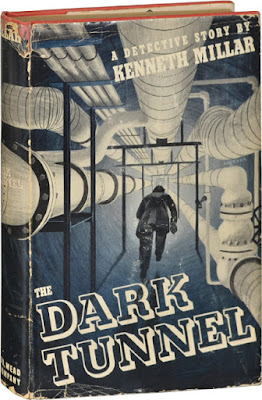 THE STORY: Who knew that Detroit was a hotbed of Nazi sympathizers and American traitors? Robert Branch, a history professor at Midwestern University, accidentally learns that one of the most trusted members of the faculty is suspected of being a Nazi collaborator. But his meddling soon leads to attempts on his life, the questionable suicide of a colleague, and the police in hot pursuit of Prof. Branch as prime suspect for the murder of a faculty member. Complicating matters is the reappearance of a former flame he met in Germany who may be involved in the spy ring.

CHARACTERS: The novel is narrated by Branch and shifts between past and present. We get to know of his current work on the War Board at Midwestern University in Arbana, MI (clearly modeled on University of Michigan, Ann Arbor) and his past life as a student in Germany. There he meets Ruth Esch, a part time actress in a Munich theater guild. Ruth also has her own flashbacks where we learn of her life and her involvement in the anti-Nazi underground. But when she resurfaces in Michigan years later Branch begins to question her loyalty and truthfulness. Could she have turned sides? The other main character is Peter Schneider, son of the suspected faculty member Prof. Herman Schneider, and the obvious villain of the piece. He's one of those typical Germans you encounter in spy novels of this era. Eerily handsome, Aryan blond, overtly sadistic. If you're well read in spy novels of this era that description should also set off a red alarm about Schneider's deep, dark, secret which unfortunately is ruined on the cover of one well known paperback edition of this book. It's not really a spoiler for me as it was pretty much a dead giveaway the moment he was described. There are, however, other surprises and twists in the novel that actually are more shocking than that one. Shocking to a 21st century reader's sensibility, that is. But I'll refrain from going into greater detail. It deserves an essay of its own. 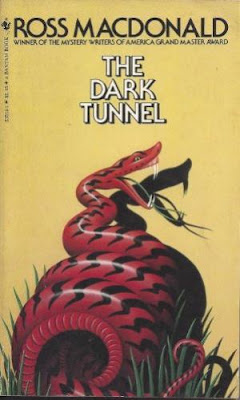 QUOTES:  The Dark Tunnel (1944) was Millar's first novel, completed while he was a graduate student at the University of Michigan. He, of course, would become better known as Ross Macdonald and the creator of Lew Archer, one of the best private eyes in the genre. Already his talent for metaphor, description and artful prose is on display. Here are some of my favorite passages:

Most of the women wore Paris dresses and had the unreal, glazed look of the too perfectly groomed, the look of orchids and rich men's wives and daughters of top-flight politicians' mistresses.

His eyelashes and eyebrows were so light that he seemed to have none, and his steady eyes were almost colorless and held no meaning. If the eyes are the windows of the soul, Peter Schneider's soul had long ago pulled down the blinds and gone into another room.

But there was a bright light over the main desk and a young man with carefully parted fair hair sat behind it like a saint in a lighted embrasure or a dummy in a show window. A bellhop leaning against the wall by the elevator doors stirred like a reptile at a touch of sun when I came in the door. He saw that I had no suitcase and went to sleep again against the wall.

It sounded like the kind of nonsense a man talks when final disillusion has deprived words of all meaning for him, but his gun was as steady as part of the building. Yet he sounded faintly regretful, like a mosquito-lover who has to kill a mosquito.

When the mind is held awake on the point of sleep, an imagined face will take a hundred shapes, changing like a movie fadeout and fadein from beauty to ugliness, from gracious intelligence to idiot evil and back again to virtue and beauty. [...] I sat and watched Ruth's face change all night.

I felt for him the kind of remote pity I felt for Agamemnon, a weak, well meaning man betrayed and murdered in a forgotten language on a stage that time had crumbled into dust.

INNOVATIONS: So much has been written about Millar in all his incarnations and styles that writing this review is almost pointless. This is a brilliant debut on so many levels, but I'll mention only two. As an academic thriller it has insights into both wartime in the US and the claustrophobic insular world of ivory tower think tanks. As a murder mystery -- and there are several facets of a detective novel here -- Millar constructs two diabolical methods of murder. One could be labeled a quasi-impossible crime in that the killer disguises one murder as a suicide so devilishly it fools the police and nearly everyone else. Not Robert Branch, however, who spots tell-tale clues and pieces together how the implausible suicide of his colleague was a savage murder. It's gasp inducing in its sadism.

THINGS I LEARNED: Where do I start? By page 22 I had already consulted my smart phone seven times! Millar stuffs his pages with esoteric references and literary allusions that eluded me. The wartime references surely would have been fresh in the minds of contemporary readers, but to a 21st century history-ignorant reader like myself I not only craved more background I needed it if I was to understand the novel.

1. Detroit really was a hotbed of spies. One spy ring was led by Grace Buchanan-Dineen, a Michigan society woman known as "The Countess" who recruited everyone from auto workers to doctors to a professor at Wayne State University in gathering information related to the war effort from various universities and industries, notably the aircraft factories in Michigan. There was also Max Stephan who helped German POWs escape form Bowmanville camp near Toronto and helped them settle in Michigan. All of this has been covered in newspapers of the era, several non-fiction accounts, and even a novel featuring Pucci Lewis, a woman Air Corps pilot turned sleuth who appears in Lipstick and Lies, the first of a series of mysteries by Margit Liesche.

2. Wobbly was a nickname for members of the International Workers of the World (IWW), a labor union formed in 1905 and affiliated with socialist and anarchists labor movements. AFL, the American labor union organization, was considered extremely conservative while IWW was seen as dangerously radical for their all-inclusive membership policy that allowed women, people of all races -- especially blacks, and immigrants many of whom didn't' speak English to join their ranks. Many IWW members were also aligned with the early Communist party movement.

3. Branch is admonished for smoking during the playing of the Horst Wessel song in a key scene in the Germany flashback. "The what," I said?  And why couldn't you smoke during a song that preceded a military procession? Turns out this is the euphemistic term for the Nazi national anthem. No one moved or was supposed to show any disrespect while it played in public. Smoking was also taboo apparently as Branch gets his pipe knocked out of his hand by a stuffy old German man. This is how he meets Ruth who politely intervenes before the encounter turns into a brawl. Anyway,... Wessel wrote the militaristic poem that served as the lyrics for the anthem. Prior to World War Two and Hitler's rise to power Wessel was an SA (Sturmabteilung) Officer, or storm trooper to all us slang loving Americans.

4. Some vocabulary I picked up: arriviste - an upstart, someone promoted to a position of authority but who has not yet earned respect. Branch uses it self-deprecatingly to describe his unworthy assistant professorship.  cenotaph - literally "empty tomb", is a monument erected on a site to commemorate a person or group of people who are buried at a different location.  I've heard the slang term "Sellotaph" before to describe roadside memorials for car accident victims and suicides but never knew that this is obviously a pun on the word "cenotaph".  Sello meaning the cellophane wrapping that come with the flowers and other items left to memorialize the loved one. 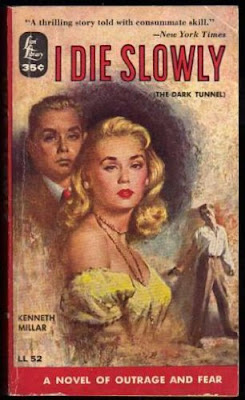 EASY TO FIND? Good news to report on this one. All of Ross Macdonald's books, including his early work under his real name, were reissued in paperback and digital books by Mysterious Press/Open Road Media. They used the Macdonald name for all of them so don't go looking under Kenneth Millar if you want a new edition. And of course you can find hundreds of used copies in various paperback editions under either name at very affordable prices. If you have some spare cash on hand you can shell out $350 for a first edition with DJ. Wait! That's with a facsimile DJ. A first edition with a genuine DJ will cost you $1500. The prices only go up from there ending at an audacious price tag of $55,000 for a pristine signed copy. "Ye Gods!" as my mother used to say.

Vintage paperback collectors might know of the alternately titled I Die Slowly in the second Lion Library edition. Wisely, Lion decided to remove all spoiler references from this second edition cover. I'm not showing the cover of the first paperback edition of The Dark Tunnel. You're welcome to find it on the internet and ruin one of the twists in the book all on your own.