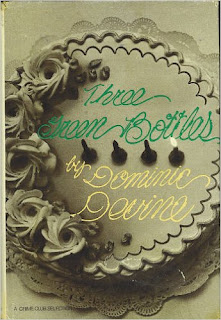 THE STORY: A teenage girl is found strangled at the edge of the golf course in a quiet village. Suspicion turns to the last men seen with her. When the prime suspect is found dead a few days later of an apparent suicide the village slowly settles back into routine. The man’s brother comes to town and is not satisfied with the suicide verdict suspecting his troubled brother was not only innocent but was murdered because he knew something about the girl’s death. Then another girl is found dead killed in the same manner and left at the same scene. Is Mark Kendall right about the possibility of a serial killer hiding in the quiet village?


INNOVATIONS: Three Green Bottles (1972) is told in five separate parts narrated by three different characters. Each section is preceded by a “prologue” told in an author omniscient voice. Parts One and Five are narrated by Mandy Armitage, an eighteen year old part time Sunday school teacher and volunteer for an organization that helps developmentally delayed children (or “spastics” as the British called them until very recently). Parts Two and Four are told by Mark Kendall, the physician brother of Terry Kendall who was found dead at the foot of a cliff. Mark serves as an amateur sleuth of the piece. There is also a police investigation going on but we learn of it only through Mark’s encounters with Inspector Hugh Robens. Part Three, the most interesting portion of the novel, is narrated by the most fascinating character – Celia Armitage, a 13 year old girl with a reputation for being stupid, unruly, and thoroughly nasty. Her voice is unique and feels utterly authentic for a foul mouthed little girl. Her worldview is that of an opinionated brat who at times lets her nasty nature and artfully developed mask of a brat drop to reveal that she is very misunderstood and almost completely unloved. She’s quite a creation and one of the most original facets of this tricky, plot heavy novel.

THE CHARACTERS: Because of the various viewpoints we get a variety of presentations of the fairly large cast of characters. It is up to the reader to make decisions about the authenticity of each narrator and their perceptions of the characters in the story. Who is telling the truth, who is prejudiced? There are several teenage girls who we get to know through the narrative of the two Armitage sisters, actually half sisters as they have different mothers. Mark Kendall’s two narrative sections tend to spend most of the time figuring out the mystery surrounding his brother’s plunge off the cliffside and he does quite a bit of amateur detective work trying to find out what Terry knew about the death of Janice Allen, the first victim. Suspicion falls on some women and even Celia who had threatened to kill many of the girls for treating her so poorly. But this is almost immediately dismissed by police since the girls were strangled and left naked on the golf course. The crimes suggest a male sexual predator at work though a coroner’s reports prove none of the girls were sexually assaulted. Among the suspects are Tom Baines, a history teacher dubbed “peeping Tom” by the girls for his supposed proclivity for looking up their dresses; Dr. Ben Radford, who shows an unusual interest in Celia and has an altogether too close relationship with Baines; Miss Carey, another teacher at the girls’ school who has a habit of giving rides to the children if she thinks they ought not to be walking around at night alone. Celia also does a fair bit of girl sleuth work as she spies on one girl and is witness to some events that might lead to the capture and arrest of the killer, but she has no desire to share what she knows with the police until it is almost too late.

THINGS I LEARNED: A “lilo” is a slang term for an air mattress in England. Just like other eponyms like Xerox -- a trademarked brand name which has come into use as a verb -- Frank Lilo, inventor of a type of inflatable raft, has had his surname turned into a word. Though Lilo’s invention was a kind of raft used in pools and at the beach rather than an air mattress meant to be a substitute bed or a piece of rec room furniture the lower case lilo can mean any type of air mattress. Seems to be strictly a British term. I’d never heard or read of it before.

The title of the book comes from another bit of British trivia I knew nothing about. “Ten Green Bottles” is a monotonous and annoying children’s counting rhyme similar to the equally monotonous and annoying “99 Bottles of Beer” we have in the US. Both have a countdown method with the green bottles rhyme having the line “If one of those bottles should accidentally fall” matching the US line “Take one down and pass it around”. I think it’s a rather weak metaphor for the three victims in the book since they don’t die one right after the other, several months pass between each killing. 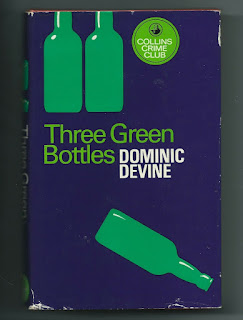 EASY TO FIND? At one time Three Green Bottles was fairly easy to find at affordable prices in the used book market. It was published by the Doubleday’s Crime Club in the US and by Collins Crime Club in the UK. There was also a reprint edition for a book club in the UK. No paperback edition exists that I can confirm. I’ve seen US book club editions a long time ago, but they all seem to have vanished now. Only a few copies are for sale and many of them are steeply priced. You might try your local library. But be warned: some of the US editions had a horrible printing error. Pages 165-188 were printed twice and bound in the book and pages 141-164, including the prologue to Part Four, Chapters 1, 2 and some of Chapter 3 of Mark Kendall’s second narrative section, are completely missing! This may explain why so few US copies are for sale. My guess is most of those misprinted books were returned to the publisher who then disposed of them.

At one time Devine’s books were very popular and he was in many US and UK libraries. His first crime novel, My Brother’s Killer (1961), seems to be his best known book and has been reprinted several times in paperback editions, the most recent by Arcturus about three or four years ago. Some of his other books were made into movies or TV shows including The Fifth Cord which was adapted into an Italian giallo thriller starring Franco Nero.
Posted by J F Norris at 10:37 AM