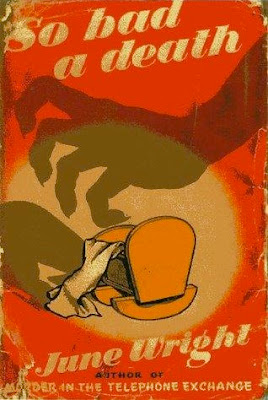 THE STORY: Maggie Byrnes who made her debut in Murder at the Telephone Exchange as a phone operator turned amateur sleuth, is on the case again in So Bad A Death (1949). This time she's married to policeman John Matheson who endures her inquisitiveness with limited tolerance. The newlyweds are in the market for a house and this leads Maggie to her meeting with Cruikshank, the unctuous real estate agent, who works for James Holland, self-appointed "squire of Middleburn".

Holland owns Dower House, a cottage that Cruikshank has been trying to sell for years, and it's a running joke of sorts to show it to prospective clients knowing full well that Holland will refuse the sale. Maggie, self-assured and not a little bit tough, is no match for him. She wins him over and the house is hers. Weeks later "Squire" Holland invites a motley group of his "subjects" to what turns out to be a very odd dinner party and things turn sinister. Holland is not well liked by his family nor the locals and it comes as no surprise when his body is found on the grounds with a bullet in his head. Maggie becomes way too involved in the case and frustrates her husband to the point of exasperation. Over the course of her thorough but entirely unorthodox murder investigation she endangers herself, another woman's child, and her own son. Some amateur sleuths don't know when to stop meddling.

THE CHARACTERS: June Wright has been called Australia's own Agatha Christie. While her plotting can often be intricate it's not a devious or ingenious as Dame Agatha's. And the laudatory comments from new critics and reviewers of her work who purport that she invented the amateur female sleuth are exaggerated to the extreme. Maggie is very much in line with characters like Pam North, Jean Abbot, Anne McNeill, and to a certain extent Haila Troy -- all wives who turn detective alongside their equally nosy husbands. Unlike many of those women Maggie has a stronger, tougher personality. She takes no BS from anyone. Brusque, forward, opinionated and -- dare I say it -- a bully at times, Maggie suffers no fools. She has little room for sympathy in the face of weakness as in this passage where she encounters an enraged and possibly inebriated nurse: "She started to weep in a maudlin fashion. It was disgusting and rather alarming, alone with this foolish woman in the middle of the wood..."

Rather than comparing June Wright's style of detective novel to Christie's work I'd class her with fellow practitioners of domestic melodramas and Neo-Gothics like Ursula Curtiss, Mignon Eberhart (in her 50s period), and even Margaret Millar. The strong female protagonist who recognizes her faults at the eleventh hour and manages to prevent herself from doing real harm as a result of her prying reminds me of the women characters that populate the work of Millar.

The supporting players are highlighted by an assortment of oddballs like the malingering invalid with a waspish tongue Mrs. Power-Potts; her slavish daughter Diane; Ursula Mulqueen who dresses in pink taffeta and cultivates an artificially cheery persona to mask her malaise; Ernest Mulqueen Ursula's rancher father, the most Australian character in the cast; a handsome Lothario with the ludicrous name of Nugent Parsons; and the beleaguered young widow Yvonne Holland who is bullied by her father-in-law while struggling to care for her chronically ailing baby boy.

THE ATMOSPHERE: The depiction of Dower House and the Holland estate are prime examples of the Neo-Gothic oppressive households and the imposing (often haunted) buildings that characterize the old 18th and 19th century Gothic novel. Wright also has a talent in painting frightening pictures and raises a few goose pimples in the formulaic "traipsing through the woods" sequences so often found in this subgenre. The sense of trepidation is well conveyed and she manages to transform the "faux English spinney" surrounding the Holland's Australian estate into a sinister landscape fraught with hidden dangers and prowlers lurking in the shadows. There are a couple of effective scenes when Maggie is looking for evidence and whispered voices and animal noises punctuate the chilly silence. 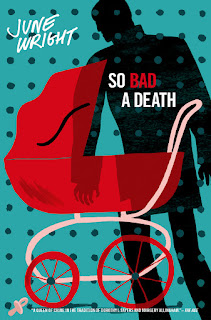 INNOVATIONS: So Bad A Death touches on two fairly taboo topics in detective fiction -- abortion and child murder. Wright seems to be fairly modern in her understanding of the frustrations of motherhood, the fear of entrusting your children to the care of physicians and nannies, and discussions of the ethics and morality of abortion. These asides into medical ethics also serve as clever bits of misdirection and sway the reader's suspicions while simultaneously laying the groundwork for the real motivations of the villains in what turns out to be an elaborate conspiracy.

One of the best bits is that Maggie's little boy Tony turns out to be a secondary detective, albeit an accidental one. His boisterous play and curiosity lead to the literal uncovering of two key pieces of evidence - one found in the rough of a golf course, the other in a sand pit he was digging in. That Maggie is blithely ignorant of the importance of these items until it's almost too late only serve to underscore Wright's ideas about motherhood and the role of the stay at home wife. Throughout the story we are reminded that Maggie sees raising a child as dreary routine and how often her little boy's behavior is dismissed as not only bothersome but irrelevant. Nothing could be further form the truth. In Wright's mysteries, as in the best whodunits, a seemingly minor incident can prove to be of grave importance.

THINGS I LEARNED: Parthian shot - I have read this phrase many a time and never bothered to look up its origin. It's used to describe a cutting remark or insult made as someone departs or a way to end a conversation rudely. The term comes from an ancient Iranian tribe of warriors known for their archery skill. The Parthian shot was their skillful habit of releasing arrows backwards at their enemy as they retreated on horseback.

Australian lingo often left me in the fog. The word "dummy" is footnoted as being a slang term for a baby pacifier. That was very helpful. But later in the story Maggie picks up a jar of "comforter smear" and I was utterly confused. No footnote for that phrase. Did people actually put some kind of paste on quilts to disinfect them or something? That seemed ridiculous to me. An internet search turned up a very vulgar Twitter comment using both comforter and smear to describe something so disgustingly absurd it made me roar with laughter, but didn't help me to understand what it meant in Wright's book. In the final pages I learned that "comforter" is also a synonym for pacifier and that the comforter smear was a malt extract that was put on the pacifier to make it more tasty. It was crucial to understanding something utterly insidious that the main villain does. To be left in the fog wondering what "comforter smear" was left me feeling a little bit cheated that I couldn't' figure out something on my own that perhaps a British or Australian reader would just take for granted.

EASY TO FIND? Yes, it is! Isn't that good news? So Bad a Death is one of three June Wright mystery novels that have been reissued by Verse Chorus Press. Buy a brand new copy or get one of many cheaper "newer" copies from the many resellers out there in the digital shopping mall we call the internet. I enjoyed this one more than Duck Season Death which I reviewed last year. This book impressed me so much that I went looking for more. I managed to track down a rare June Wright title (not among the reissued titles) purchased from an Australian dealer for a mere $23 and will be reviewing that one next month.
Posted by J F Norris at 11:09 AM