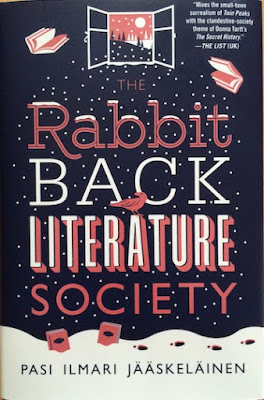 Quick! Give me the name of a Finnish novelist. Or any  writer from Finland.

Aha! I thought so. Somehow Finland gets overlooked in the world of letters. I certainly couldn’t come up with someone. Not even an obscure writer of a forgotten award winning book though Finland does boast such a writer: Frans Eemil Sillanpaa, winner of the 1939 Nobel Prize in Literature. Just in case you’re wondering he wrote over fifteen novels, the most well known of which was Nuorena nukkunut translated into English as The Maid Silja (or Fallen Asleep While Young). News to me.

I do know one Finnish writer now. His name is Pasi Ilmari Jääskeläinen but this knowledge comes only after I’ve finished reading his first novel Lumikko ja yhdeksän muuta (2006), translated into English as The Rabbit Back Literature Society (English transl., 2015). Where has he been all my life? Well, he’s been writing short stories with a science fiction/fantasy bent for the past twenty plus years while also teaching Finnish language and literature in an “upper secondary school” which I guess is Finnish high school. A prizewinner himself of a handful of Finnish genre fiction awards for his stories Jääskeläinen's first English translated book will perhaps open the door for a wider audience. A quick look at the bookselling sites already turn up two works – his award winning short “Where the Train Turns” and another story in the Finnish speculative fiction anthology It Came from the North, both offered in digital versions only.

Jääskeläinen’s storytelling is riveting, his skill in creating a sinister atmosphere is palpable, and his writing reveals some trenchant observations that are deeply evocative. No doubt all these qualities are due in part to the efforts of translator Lola M. Rogers who artfully renders Jääskeläinen’s text in English without losing its Finnish flavor. On his blog Jääskeläinen has written: "It’s obvious that English isn’t my native language and I don’t feel completely comfortable using it this way. Finnish is my guitar and when using it I’m like Jimi Hendrix. On the other hand English is for me like a bagpipe in the hands of a rabbit when I try to express my thoughts with accuracy and precision." Nevertheless he was impressed with Roger's work as translator and feels it captures his intent better than he could had he translated himself. Yet to me this book should not be known only as Finnish writing; this is universal writing touching on resonant topics that we all experience regardless of our native tongue.

The novel is an exploration of the art of writing (sometimes the artlessness of writing), the gift for storytelling, the act of creation itself all set in the context of a fantastical mystery involving the disappearance of a Finnish writer of children’s stories, the elite group of young writers she mentored and the possible murder of one of those writers over thirty years ago. This makes it sound like a mystery novel, and it is. To be more specific it turns out to be something of a literary detective story -- but it is so much more as well. In Jääskeläinen's own words it is also a love story, a ghost story and a fairy tale.

Under Laura White’s unorthodox, often nightmarish, tutelage the nine writers of the Rabbit Back Literature Society have matured into bestselling authors and household names each with their own cultish following. Enter Ella Milana, a substitute teacher with aspirations to write, though her first love has always been literary research. Her graduate thesis was on Laura White, the children’s author who gathered the nine young writers under her wing and guided them to the top of Finland's bestseller list. When White comes across Ella’s one venture in short story writing published in the local newspaper she invites Ella to become the honored tenth member of the Rabbit Back Literature Society. While at a party where Ella is introduced to the rest of the members Laura White vanishes. Ella wants to find out why the writer disappeared and where she might be. Her research background turns her into a literary detective as she digs into the buried secrets, both literal and metaphorical, within the cult group she has joined.

We get to know the group through a strange interrogation ritual known as “the Game”. Thankfully, Jääskeläinen veers away from the usual metafiction motif of the writer as demigod and all riffs of creating that usually follow. Instead, he seems to be satirizing the writer's life. These members, though successful and popular with their fans, are at their heart a secretive, reclusive bunch festering in a morass of prurient curiosity and career jealousy. He seems to be vilifying the writer’s life and not celebrating it. He captures perfectly the writer’s capacity for all consuming envy when confronted with an artistry he knows he can never achieve. 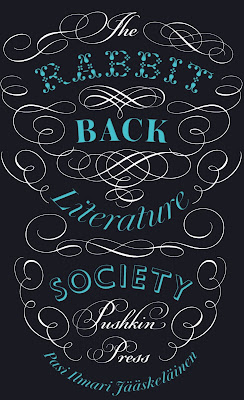 We listen as the Society members voice their regrets and confessions of failure when they compare themselves to the original tenth member, a super genius of a writer who wrote mind-bogglingly great stories. That they can never remember his name is telling -– his talent was more important to them than his personality or his identity. They never got to know him, nor did they want to, it was his words, his stories that they desired. He was a cipher of a boy, almost always silent until he was called upon to read from his notebook. Only then did he command their attention and they were awestruck by the power of his words. His notebook soon becomes an object to be coveted by the rest of the group. Her penetrating research and relentless questioning of the Society members leads Ella to believe that the boy’s sudden and violent death might well have been a murder. Who among the Rabbit Back Society was zealous enough to kill in order to possess the boy’s notebook filled with fantastic ideas and literally awesome writing?

Along the way we are treated to metaphysical discussions of identity, the perception of the self, the need for writers to rely on others’ lives for their stories, and the loneliness of living a life as a constant observer rather than a participant. Ella's dreams are revelatory and often prophetic. Dream imagery and mirror imagery dominate the story. There are vignettes about seemingly innocuous incidents as in the sequence when Ella finds herself fantasizing about a stranger based solely on his attractive profile until he turns his head and she sees his face in full. Then everything evaporates and her opinion changes to one of disgust and indifference. It’s a universal moment that we can all relate to eloquently captured and evocatively rendered. It says so much about how Ella thinks and feels and will have repercussions as she begins to uncover and make public the secrets of the Rabbit Back Literature Society. 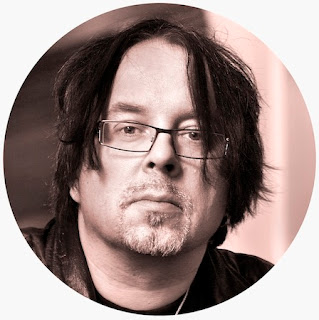 Because Jääskeläinen’s first love is fantasy he finds a way to interweave elements of the surreal into his densely packed narrative all the while embracing the Nordic countryman’s love of ancient mythology and folklore. There are gnomes and wood nymphs and water nixies lurking within the town of Rabbit Back. Some of the citizens make a supplemental income as Mythological Mappers who will inspect your house and yard for any variety of creatures and let you know where it is safe to stroll and where you ought to avoid. A subplot involves an inexplicable "infection" that has changed the contents of books in the public library. Ingrid Katz, head librarian and a member of the Society, has made it her mission to destroy all the infected books for fear that the contagion will spread to other books. How can one have all copies of Crime and Punishment end with Sophie shooting Raskalnikov because she feels it her duty to rid the world of an undesirable? What else might happen to other great works of literature if that infected book were allowed to exist alongside others? Laura White is in love with folklore and mythology and her stories -- though she never intended them for children -- are populated with fanciful creatures and talking animals. Martti Winter's home is surrounded by marauding packs of dogs that never stop howling and seem to be on constant patrol guarding something hidden out in the forest.

The Rabbit Back Literature Society sets up many mysteries but does not answer them all. This may frustrate some readers who prefer to have no plot threads left hanging. For others who embrace the mysterious in everyday Life it offers many rewards, plus the opportunity to discuss possibilities for those unanswered questions. Like a gourmet meal it is a book meant to be savored, digested and contemplated. From its highly original opening to the final jaw dropping pages that completely transform the story's narrative this is wholly immersive reading experience. And to carry on with the food analogy it will have you craving more from the writer. Since this first book was published ten years ago Jääskeläinen has written three more novels, none translated into English. Let us hope that this changes. And very soon.
Posted by J F Norris at 12:40 AM