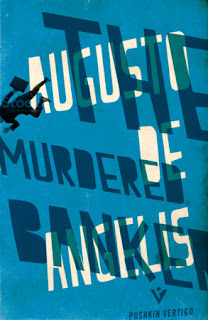 There is a tendency to pigeonhole English language mysteries into two camps - British vs. American, cozy vs. hardboiled, detective novel vs. noir, etc., etc,. and so forth. I try my best not to fall into this labeling habit and I spend more time talking about subgenres within those categories of crime fiction. But once you travel outside the dominant world of the British/American dichotomy it becomes clear that there is a type of detective novel that is very peculiar to European non-English speaking writers. Augusto DeAngelis, a little known Italian (at least to English language readers) may have been the man to have invented it. This would be the humane detective novel, a murder mystery not so much concerned with the intricacies of a puzzling murder but the human drama of crime. Unlike the myriad detective novels with a focus on gathering of cigarette ash and measuring footprints in the snow, the humane detective novel pays less attention to the puzzles obfuscating the crime and concentrates itself on the people involved. You'll find no emphasis on unraveling strange or bizarre aspects like backwards clothing, footprints on the ceiling, or outlandish murder methods. Instead the story is centered on the characters themselves, their volatile emotions and the structure of a detective novel is used as a template to explore the messy aftermath of a violent crime and how it affects those who must live on in the shadow of murder.

In The Murdered Banker (1935) -- the debut of series detective Inspector DeVincenzi, Commissioner of Public Safety in Milan -- the discovery of the corpse in the home of Gianetto Aurigi first appears to an open and shut murder case and that Aurigi could be the only man to have committed the crime. DeAngelis adheres to the rules and formulas of the traditional detective novel of the time, and within a few pages the simple crime becomes a baffling mystery with the introduction of unusual clues like a perfume bottle filled with poison and a jeweled lipstick case. Then there is the entrance of a foppish private detective who will act as foil to DeVincenzi (and perhaps serve as a parody of Poirot). All the while DeAngelis adds generous helpings of Italian philosophizing. DeVincenzi, our policeman hero, has a tendency to wax poetic on topics ranging from his sometimes tedious job to the role of the criminal in society to the futility of preventing murders. Additionally, there are moments of unexpected humor as in this passage when the medical examiner has let DeVincenzi know he has just made a chalk outline around the corpse:


When senior officer Maccari turns over the case to the much younger Inspector DeVincenzi we watch him take charge in an extremely unorthodox manner that includes eavesdropping on suspects and enlisting his sergeant and lower ranking officers to conduct spying missions. He offers this reasoning to justify his methods:

"The usual means, legal, all the rules, are not enough, and they're not helpful in this case. I must have recourse to other methods if I want to get to the truth...My conscience will allow it, and in fact it obliges me, even if the rules and codes forbid it."


All the while he reveals his interest in human nature and personalities rather than physical evidence. He likes to watch and listen to the people involved, very often while hiding behind a door or lurking in the shadows of the next room. He is shrewd, slightly manipulative and certainly less cerebral than the Holmesian school of detectives. Though he does not shun reasoning and logic DeVincenzi follows his heart and gut rather than his brain. He leans heavily on a more humane approach to crime solving and is especially interested in allowing the suspects to let loose with a barrage of passionate emotions. Tempers fly, arguments arise leading to flailing arms and punching fists a good deal of tears while DeVincenzi stands back to watch, listen and intervene at the eleventh hour to prevent any real lasting harm.

The word "ruin" recurs throughout the story. There is a desire among the suspects to prevent the destruction of their reputations, fortunes and futures. DeVincenzi thoughts give way to this bitter insight: "[He knew once the truth was revealed the ground would be seeded with ruin." One suspect is "...confronted with ruin..." while another proclaims "I had to save him from ruin." The lives of the Gianetto, his fiancé Maria Giovanna and her father Count Marchionni are inextricably intertwined with the discovery of the murdered banker who turns out to have been a rather nasty character. Plots are revealed, multiple murder weapons are discovered, and murderous impulses are uncovered in a story filled with passionate explosions and declarations of devotion and undying love. In the process of solving a murder hearts will be broken, a family will be divided then made whole and the revelation of the true villain comes in an unexpected yet ironically familiar twist.

The Murdered Banker is the first of three novels by Augusto DeAngelis to be published by the new crime imprint Pushkin Vertigo. Taking their name from their recent reissue of the Boileau-Narcejac classic suspense novel made even more famous by the Hitchcock thriller Pushkin Vertigo will bring new editions of Italian, Austrian, French and other European writers receiving their first English translations as well as reprints of Japanese writers like Shimada and Yokomizo. I'm excited by these new editions. DeAngelis was called the "father of the Italian detective novel" by critics and genre historians in his own country and I'm eager to read more by him and the other writers that Pushkin will be introducing to the English language readers throughout the world.
Posted by J F Norris at 10:31 AM