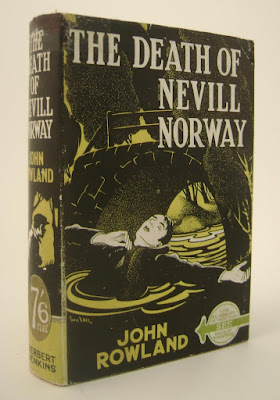 In the coming months I suspect you will be hearing a lot about John Rowland on the many vintage mystery blogs. Two of his detective novels will soon be reissued by British Library Crime Classics. I've already received an ARC of one of his books, but since it won’t be released until April here in the US I can’t post my review yet. There is so much that is interesting about this forgotten writer, however, that I thought I’d get on jump on the rest of the gang out there in the blogosphere.

Rowland began his career as a chemistry teacher, veered into journalism and publishing with an emphasis on philosophical and religious magazines. Somewhere in mid-career as a fairly successful, albeit second tier, detective novelist Rowland began to show an interest in true crime cases. His first fictional account was of the poisoner Dr. William Palmer, published in 1938 as Slow Poison. Drawing from newspaper accounts, courtroom records, the Newgate Calendar and with a bit of the novelist’s embellishment Rowland recounts the story of one of England's most infamous serial killers who though tried and executed for one murder was more than likely responsible for many more, some of them his own children.

Only a few years later he wrote his second fictional account of a little known 19th century murder that took place in his own hometown. Using similar factual and legal accounts as the basis of his slightly fictionalized account Rowland tells the story of The Death of Nevill Norway (1942). Rather than structuring the book as a fair play detective novel Rowland instead chooses the "inverted detective novel" style of storytelling. The culprits are identified fairly quickly in one of the earliest chapters and we follow both the planning and execution of the crime as well as the police investigation as the two plot threads play out side by side.

Rowland was born in Bodmin, Cornwall where he attended school, college and spent his early adulthood. In his own hometown during the winter of 1840, almost eighty years before he was born, a highly respected businessman in the timber trade and sometime philanthropist named Nevill Norway was attacked and murdered by highwaymen. He was robbed of a sizable amount in cash, a debt that he had collected in town from a tradesman who was just about to embark on a journey to Canada. This transaction was witnessed by several people, including one of Norway’s killers.

Early in the book Rowland reveals the murder plot concocted between the two criminally minded brothers William and James Lightfoot. Their home life is squalid, the two men are both unemployed and married to two harridans. Rowland paints them as despicable criminals with unforgiving wives. He also adds a subplot of his own creation not found in the court records in which the Lightfoot brothers intend to frame a young man who had an violent argument with Norway over his impending engagement to Norway’s niece. Rowland assigns the role of detective to Constable Jackson, the actual London policeman from the true case brought in by the Cornwall magistrate to solve the case when it becomes clear that Norway was murdered and robbed.

In Rowland's novel Jackson is an affable detective in what proves to be a generally unremarkable but capably told inverted detective story. Unfortunately, even with Jackson's uncovering of such clues as a broken pistol hammer, footprints indicating a struggle in the muddy ground of the crime scene, and a horse's bridle and reins stained with blood we as the reader know almost everything before Jackson does. Rowland allows two or three scenes of true detection with only one true surprise in the collection of the evidence that leads to the Lightfoot brothers’ arrest. And then the two turn on each other as the real brothers did in the actual Norway murder case.

What makes the book interesting are the colorful supporting cast including a shrewd farmer who with his keen observational skills suspects a murder long before the police. Other highlights are the well drawn Cornwall setting, a genuine sense of early nineteenth century living and customs with not one shred of anachronism, and Rowland’s talent in replicating the Cornish dialect. He manages to sprinkle the narrative and dialogue with Cornwall regionalisms like “wisht” (slang for miserable) and “thickee” (that) ; both definitions thankfully footnoted. One of the many things I learned related to the vocabulary is that the word “zany” was not only used regularly as an insult to someone’s intelligence during the 19th century, its use dates back to the 17th century according to the lexicographers at Merriam-Webster. 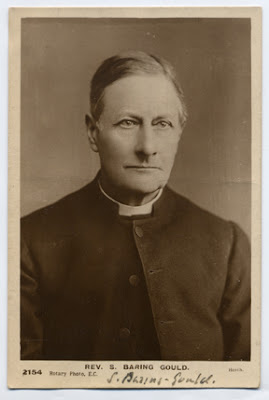 Even more fascinating than the ironic outcome of a case -- one that easily might have been a perfect murder were it not for the brothers' craven nature -- is the utterly surreal secondary true story. Uncovered in the early twentieth century by another writer it seems to have escaped Rowland's research. If only Rowland had uncovered this portion of the story the novel might have been a minor tour de force in the mingling of crime and paranormal.

Noted novelist, mythologist and Anglican priest S. Baring-Gould uncovered a single document from the early twentieth century that sheds a new and eerie light on Norway’s murder. Rev. Baring-Gould tells the same story from the viewpoint of Norway's naval officer brother in “The Dream of Edmund Norway” published in Chambers’s Journal (spelling is correct, BTW) in the August 8, 1908 issue. Drawing directly from Edmund Norway’s captain’s log for the British merchant vessel Orient, Gould reports how Captain Norway dreamed of his brother’s murder while sailing from Manila to Cadiz. The dream vividly details the method including how the two Lightfoot brothers grabbed the horse by the bridle, fired two shots and beat Nevill Norway senselessly with the pistol that jammed. It’s an uncanny report that belongs to the pages of “Ripley’s Believe It or Not!” and probably did appear there though I ran out of steam looking for it. Baring-Gould does a fine job of submitting for our approval the verbatim pages from the journal clearly dated the exact night of Norway’s murder and giving eyewitness accounts of the journal not having been tampered with after the sensational Lightfoot trial. You can read the story yourself via the miracle of Google Books.

But the fascination does not end there. Norway, it turns out, is the great-grandfather of the novelist Nevil Shute, author of (among many other books) the dystopian post-nuclear novel On the Beach later adapted for the movies with Gregory Peck, Ava Gardner, and Anthony Perkins in the cast. Shute’s real name – something I never knew – is Nevil Shute Norway! I found an amusing speech delivered by Shute’s daughter Shirley who gave a talk about her father in New Mexico on Jan 16,1999 to a Shute literary society gathered to celebrate the centennial of the writer’s birth. You can find that speech here.

There’s no end to the unusual ways one can be educated reading forgotten crime novels. This particular book turned out to be a treasure trove of unexpected riches.
Posted by J F Norris at 2:13 PM