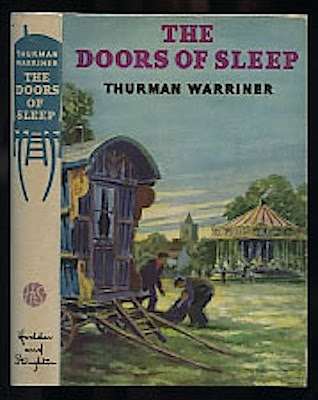 "Once again, " Mr. Ambo said, "we seem to be exploring those uncomfortable fringes of the mind..."

My Penguin paperback edition of The Doors of Sleep (1955) has a list of characters labeled "Present Company" preceding the table of contents. In addition to Thurman Warriner's trio of series characters comprised of Charles Ambo, an elderly gentleman; the Venerable Grantius Fauxlihough Toft, Archdeacon of Tonchester; and John Franklin Cornelius Scotter, private enquiry agent, we will meet The Rev. Howard Smeaton, Inspector Lavender, Charlesworth Vinery and family, Mary Gentle (the proprietor of a pub called "Repent at Leisure"), Amen Sleep and his improbably named granddaughter Starry Sleep. The list of characters alone is inviting enough, but then a look at the chapter titles -- all of which deal with the many metaphoric incarnations of sleep ("Into Dreadful Slumber Lulled" and "Sleep, Thou Ape of Death" are two) -- might lead one to expect a mystery novel along the lines of the sophisticated whimsy of Michael Innes or Edmund Crispin. What we get includes more than a fair share of arcane literary allusions and ample whimsy but the book also tends to veer into a metaphysical realm with a surprisingly medieval presentation of the nature of good and evil.

When the victim of the piece is introduced as a loathsome man who finds joy in all things unpleasant and whose life's goal seems to be inflicting cruelty you just know that the he will get his comeuppance. Charlesworth Vinery is literally a hellion on wheels. Confined to a wheelchair for a mysterious crippling ailment that has no biological cause he nevertheless manages to commandeer and intimidate all who meet him. His favorite target for his very special brand of spiteful mindgame play is his young wife Alyson who in the recent past was in love with his younger brother Amos, a professional musician and composer. Alyson seems immune to her husband's odious behavior  suffering in silence, actually laughing and smiling it all away. Deep down she is tortured as Warriner lets us know all too frequently.  Toft and Ambo fear the worst among this trio. As Charlesworth continues his lifelong campaign of nastiness and knowing that Amos has a very short fuse Mr. Ambo predicts an explosion of violence that may lead to someone's death. 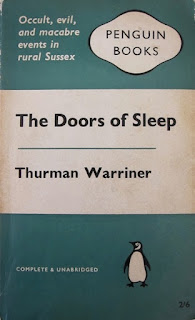 Vinery disappears one night. His body is found in two different locations by two different groups of characters at two different times. Revealing any further details of either location or the circumstances of Vinery's death will truly spoil the reading of the book. Suffice to say, the crime is macabre and the displaying of the corpse is one of the most unique aspects of the detective novel. Simultaneously the most puzzling and intriguing plot point the explanation of the scenes of the crime will uncover both the why and the how. Typical of Scotter, a detective in name only who provides the common sense angle, he makes a sweeping generalization based on what he sees: "What you've got, without any frills, is the old collusion and conspiracy story." And it certainly seems that way for much of the book. The truth will be anything but glib.

Beginning with the setting, a group of Sussex villages known collectively as "the Slumbers", extending to the Sleep family and to the haunting orchestral work by Amos Vinery that gives the book its title The Doors of Sleep is literate to the point of distraction. Indulging in an Ellery Queen-like fascination with the word "sleep" the book contains an intoxicatingly rich use of all the metaphoric possibilities of the word, its meanings, connotations and opposites. Sleep and wakefulness, hypnosis, unconscious thought, and of course death -- all can be found within the pages of this detective novel that meanders its way inexorably down a path of Old Testament inspired morality. Charlesworth Vinery is indeed a nasty piece of work. Malicious, passive-aggressive and cruel -- none of these traits can be denied. But wholly evil? A Satanic incarnation? Evidence of superstitious practices and folkloric spell casting turn up. Our trio of detectives are just as easily swayed by their discovery of a waxen image as they were by Vinery's "evil eye" and his skillful manipulation of language.

Mr. Ambo even confesses half jokingly, "Yes, it smacks of the lusty Middle Ages" at one point. And any modern reader would agree. The use of the word evil crops up more frequently towards the close of the book. It seems too simplistic at first, rather off putting, a bit laughable, like the kind of ominous language spouted by crucifix wielding vampire hunters in Hammer horror movies. Better to weakly and awkwardly describe the pervading menace throughout the story as 'ungoodness'. Sometimes evil as such is better left unnamed.

Archedeacon Toft best articulates this concept when during the course of the murder investigation the three men infiltrate Vinery's forbidden sanctuary, a room no one was ever allowed to enter. It's an oppressive space, heavily curtained to block out all light. Ambo and Toft feel the presence of something ineffable. Even Scotter gets the willies. They all need to leave almost immediately. Toft conveys the importance of what they experienced in the room:


Perhaps we all saw the evil in our own minds or the things that we fear the most. Go into any dark room sometime, Scotter. Block up your ears and nostrils and lie so comfortably that the sense of touch is scarcely stimulated. What is left is the real you. [...] No, we're not wasting time, considering these things. They've a very real bearing on all these troubles.

I feel compelled to make one tantalizing allusion of my own. The book ends in a climax that seems directly lifted from a famous Hitchcock movie. Among Thurman Warriner's many odd jobs prior to his career as a novelist was "cinema technician". Could this be a fancy way of saying he was a movie projectionist? Knowing he must have spent hours watching movies I find it hard to dismiss the influence of this very well known movie which was in theaters several years prior Warriner's book being published. The similarities of the movie's finale and the thrilling last pages of The Doors of Sleep are hard to overlook. I won't mention the name of the movie or once again I will ruin the completely unexpected action sequence.

There were only eight novels in this series featuring Ambo, Toft and Scotter. Of these books only the first was published in both the US and Warriner's native England making it difficult for us on this side of the Atlantic to find any of the other books. However, The Doors of Sleep primarily because of its Penguin reprint edition is the title easiest to find. This is one of the most unusual mystery novels I've read this year. Apart from its overarching morality it was also the most satisfying read as a mystery novel for it encompasses so many connotations of that word, just as it explores all facets of the word "sleep." 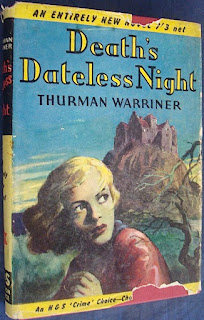 Warriner is better known under his pseudonym Simon Troy his identity reserved for exploring crime in a variety of "psychological suspense" novels that sound reminiscent of the best of Highsmith, Rendell and Robert Bloch. He was praised by Francis Iles who said of one book that sent his spine "into cold storage":  "...goes to the top of the Horror Class." I've already purchased a small pile of Troy books (much easier to find in multiple US editions) and will be reporting back on those in the coming months. What I've sampled of Warriner has whetted my appetite for ample second helpings. 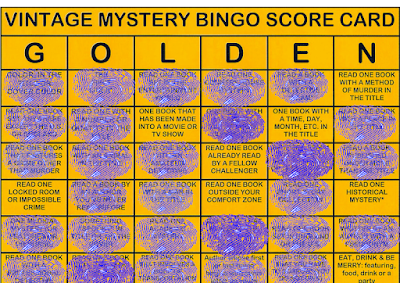 Reading Challenge update: Golden Age card, space D5 - "Book involves the Clergy or Religion."
And this makes BINGO #2 in the fifth row.
Posted by J F Norris at 1:50 AM