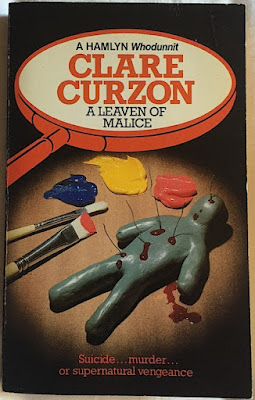 Zoe Freeman has left her narcissistic lover Clive Gibley and is looking for a place to stay. She ends up being offered a room in the home of Hester Keeble, a nurse whose specialty is caring for patients with end stage disease and terminal illnesses. Later we meet Dan Hammond, a part time assistant undertaker in his uncle’s funeral parlor but who also runs a second hand and antique furniture business of his own. The three of them become involved in a police investigation of the strange death of Estelle Bentall, Zoe’s best friend in her high school days. Strange because Zoe had visions of Estelle’s death the very night it happened. She heard her voice calling out to her and saw a woman’s bare feet suspended in mid-air in her new lodgings. But she dared not tell anyone for fear they would think the worst of her. When she learns that Estelle was found hanged in her kitchen and barefoot Zoe is sure the vision she had was of Estelle. Estelle’s husband is convinced her death is suicide but the police suspect him of murder due to some oddities like evidence of Estelle’s hands being bound with electrical tape.

The case becomes even stranger when Zoe begins to remember a trail of fatal accidents that followed in Estelle’s wake back in their high school days. Anyone who crossed her seemed to suffer a terrible death or in one case succumb to a nervous breakdown. Estelle used to talk of her being raised in the Caribbean by her mambo Adela who often referred to Estelle as having extraordinary powers since she was the child born after her twin brothers. In Haitian folklore this child is referred to as the dossu (or dossa when a girl) and is supposedly blessed with a charmed life and paranormal abilities that are revered by those who believe in such things. In death Estelle still seems to have an eerie influence over both Zoe and her husband Tim. Is it possible that she has become even more powerful now that she is dead? 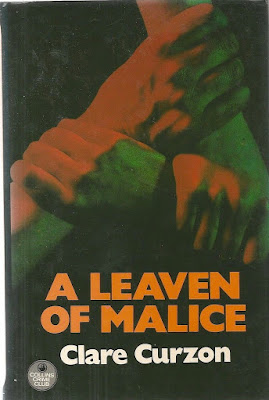 Clare Curzon’s novel A Leaven of Malice (1979) is one of the more unusual crime novels to incorporate genuine supernatural and psychic events. It starts off with no real mystery other than Hester's work and past life which are teasingly written about in an ambiguous manner. Then the death of Estelle shifts the story into a crime novel with the murder investigation and the uncovering of her sinister past life. Finally, the bizarre events involving a mural Zoe paints on the wall of her room, the visions she has and some psychic connections Hester reveals shift the book once again into the realm of a paranormal thriller. All the while Curzon’s writing is lush and imbued with a gamut of richly felt emotions. It’s miles above the usual lurid potboilers that made up the bulk of the supernatural thrillers that were being churned out in the 1970s.

Nearly all of the characters have some sort of other world encounter in the book with Zoe acting as the catalyst. Hester Keeble has her own secrets in her past which I will not discuss since they are masterfully revealed over the course of this intriguingly told and well plotted story. Ultimately her knowledge will help uncover the truth behind Estelle’s strange powers and she acts as a sort of modern day occult detective educating Zoe in all things paranormal and the dark side of Caribbean voodoo. The finale is quite a shocker and blends an intellectual approach to evil beyond the grave with some action set pieces that rival the best kind of occult detective battling supernatural beings found in the stories of Margery Lawrence’s Miles Pennoyer or Algernon Blackwood’s John Silence.

Clare Curzon is the best known pseudonym of writer Eileen-Marie Duell Buchanan. She began writing traditional detective stories in the 1960s using the name "Rhona Petrie". Her first book Death in Deakins Wood (1963) was published in both the US and UK to mild acclaim. As Petrie she continued writing a series of books featuring her detective Marcus Maclurg and two mystery novels with Dr. Nassim Pride. She later abandoned that pseudonym and used Marie Buchanan. Under this pen name she wrote a variety of thrillers, some incorporating elements of the detective novel, but all of them dealing with her fascination with occult and psychic phenomena. Greenshards (1972), better known in the US as Anima, is the story of woman possessed by a malevolent spirit and was favorably compared to The Exorcist when it first was published. The Dark Backward (1975) tells of a haunted archeological site near some standing stones and the slow demonic possession of the archeologist obsessed with his findings. A Leaven of Malice is the first book she wrote as "Clare Curzon" and her interest supernatural is still very apparent. Eventually Buchanan focused on straightforward police procedurals and created yet another policeman series character in Supt. Mike Yeadings. It is this series of books for which she is best known, but all too forgotten by most contemporary readers. She died in 2010 at the age 88 having written close to fifty books under four different pen names.