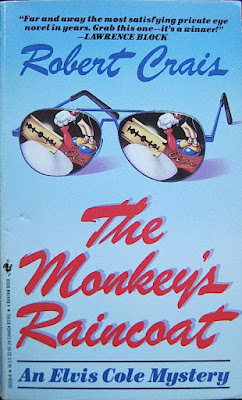 Here’s a brief run down on Elvis Cole, the private eye super hero of The Monkey’s Raincoat (1987), for those of you unfamiliar with him. He’s a Viet Nam vet. He practices yoga, tai chi and tae kwan do. His smoldering good looks somehow manage to remind women of both John Cassavetes from 1967 or --of all people-- Andy Summers of The Police. Two men who I think look nothing alike. Let’s see…what else…He can cook up some interesting gourmet dishes on a whim. He’s fascinated with Walt Disney animated movies especially Pinocchio (a clock of the boy/puppet and a couple of Jiminy Cricket figurines decorate his office) and Peter Pan visions of whom helped him survive the horrors of war. That part is still puzzling to me.  I sort of understand the metaphor of the boy who never grew up applied to soldiers, but it seems awfully weird notion to me for such a tough guy. Maybe I missed something there. And of course he’s a wise acre of the first class.  Every other line of dialogue is a smartass comeback or insult. So he just reminded me of so many other characters – Spenser with his love of gourmet cooking, Marvel comic book superheroes with the martial arts stuff, and (name any American private eye character of the past fifty years) with his smart aleck comments.  The book only got interesting for me when Joe Pike, Cole’s partner in the private eye agency, stepped out of the background and took on a meaty supporting role.

For the first five or six chapters of The Monkey’s Raincoat (1987) I just couldn’t figure out what was so special about this book. Why was this book included as one of "The Century's 100 Favorite Mysteries"? Never mind that the label given that list is hyperbolic just by itself. I saw nothing really groundbreaking or even original in the book. In fact, the whole thing reminded me of hundreds of TV shows I’ve seen in my lifetime. On a whim I went to Robert Crais’ website to verify that this was not only the first Elvis Cole book but also his first novel and then I discovered something not altogether surprising. Robert Crais spent close to ten years writing scripts for US TV cop shows before turning to novels. Baretta, Cagney & Lacey, Quincy, Miami Vice and a couple of others show up on his long resume. Aha! So that’s why the book seemed just like a TV show. Smart aleck dialogue, brand name dropping like some kind of verbal product placement gone wild, jokes based on TV pop culture, and two gratuitous sex scenes one of which seems completely out of character for the two people involved. With all the 1970s TV commercial references -- Virginia Slims cigarettes, the Shell Answer Man, Mr. Goodwrench, the Löwenbräu beer jingle "Here's to Good Friends" -- I thought the book might have been written a decade earlier and polished up over time. Crais assures us on his website that he started the book in 1985. I'm not so sure. Buried in all the distracting TV references, Sunday newspaper advertising brand names, and truly lame jokes is a compactly told story with typical macho fight scenes and brutal violence. I began to see what Crais intended this to be. It turns out to be a repackaging of the old Gold Medal paperback originals. Sex and smart aleck humor and violent fist fights and lots of bloody gunplay.

It’s a find-the-husband plot with mousy wife Ellen Lang being manipulated into seeking out the help of a private eye by her bossy loud mouthed (but of course irresistibly sexy) best friend Janet Simon. The story takes place in Los Angeles and Hollywood, USA is featured front and center for most of the book. Mort Lang, the missing husband, is a talent agent with a roster of D list actors and actresses as his clients. The rest of the cast includes a sleazy drug dealing movie producer, his bodyguard hired because of his extracurricular activities, an airhead starlet with a killer figure, and her hot tempered boyfriend equally stupid and alluring. There are a couple of cops, both LAPD and FBI, too. And because this is the 80s when cocaine was almost a required plot feature of a crime novel we get Domingo “Dom” Duran, a comic book drug lord obsessed with toreo (that’s bullfighting to all us ignoramuses) as his guiding principle and his army of trigger happy thugs and goons beating, torturing and murdering on his orders. Duran’s missing two kilogram package of “pure” cocaine serves as the Macguffin in a subplot that will connect the Hollywood characters with the gangsta characters.

I wasn’t thrilled with the plot at all. Never was enthralled with fistfights (or martial arts fights, I guess) that go on for paragraphs and graphic depictions of shoot outs that describe where all the bullets go and what damage they do to human bodies. And Elvis just doesn't do it for me. At least not in his debut. A poor man's Philip Marlowe (Crais even makes a White Knight reference) with too much sarcasm and too little restraint. It was the slow (but predictable) transformation of Ellen Lang from trampled housewife to vigilante Mom that kept me reading to the final pages. Oh! and the introduction of Joe Pike in the action filled final pages. Even though he's Cole's partner Pike is a background character, a near cipher, in the opening chapters, but he comes into his own in the finale. Pike is the best character in the book. Mysterious, brooding, taciturn and dangerous. None of his dialogue contains a single ounce of wiseacre humor. He gives the book its much needed gravitas and makes a unexpected bond with Ellen Lang.

Interestingly, Crais says on his website that if he were to recommend any book as a place to start LA Requiem, his eighth book, is the one he’d like people to read first. The Monkey’s Raincoat is definitely the work of a rookie novelist: uneven prose style, a tendency to indulge in sophomoric humor, formulaic basic plot, cookie cutter characters. In an effort to try to reinvent the private eye he ends up emulating lots of well known crime writers. And he doesn’t think twice about letting his influences show. Elvis Cole has Valdez Is Coming and other Elmore Leonard titles on his shelves, books we learn he returns to again and again. Those familiar with Leonard’s violent jokey crime novels and westerns may find themselves drawing comparisons between the two writers. Even before the reference I thought Crais was most like Leonard. However, in this outing Crais doesn’t come close to inventing characters as original and quirky as Leonard’s though he does manage to spin a few artful sentences.

There was enough here for me to seek out one of the later books featuring Joe Pike. I'd like to believe that Crais is right when he says, "I am intensely proud of those early novels — but my newer books are richer, broader in scope, and way more complex in structure, so I believe them to be more representative of the work I am doing today."

I read this as part of Rich Westwood's "Crime of the Century" reading challenge for which each month we read a book published in a specific year. July's year was 1987.