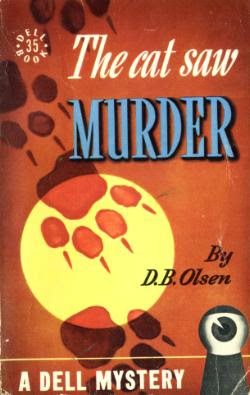 Well, I've done it. I've read a cat mystery for the first time in my life. And damned if I didn't enjoy it. It's a strange book, one of the earliest cat mysteries if not the utter first. Strange because it is far from what one would expect from a cat mystery. It's in the grand tradition of the Mary Roberts Rinehart school with all the foreshadowing and aggravating hinting at events yet to come that led to the disparaging label of "Had I But Known" plus all the Grand Guignol gruesomeness that was Rinehart's trademark. There's a grisly ax murder, some dismembered body parts, midnight traipsing in secret attic passageways, an attempt on our heroine's life as well as the cat's, and blood everywhere. Literally everywhere. Except on the cat, that is. The only eyewitness to the crime seen popping out of the murder room, the cat is spanking clean and wet as if she'd just been washed. Is it any wonder with all these Gothic trappings and bizarre elements that I lapped up this cat mystery like a saucer of milk?

The Cat Saw Murder (1939) marks the debut of one of those little old lady amateur sleuths that tend to drive me batty now that I'm closely approaching becoming a not-so-little old man myself. But I found Rachel Murdock to be one of the better incarnations of a tired stereotype from the Golden Age. She may be seventy years old, but she's sharp witted, spry and risk taking senior citizen. She fits right into the mold of the Badass Biddy taking on not only a malevolent married couple who indulge in blackmail as a hobby but a crazed and violent murderer who will stop at nothing to cover up the crimes. 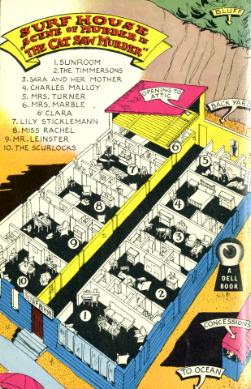 The story involves Miss Murdock's niece Lily Stickleman who fears for her life and Samantha, a cat that has inherited a fortune. Miss Murdock makes her way to the beachfront hotel called Surf House, signs on as a guest, and digs into the mysteries of anonymous letters, blackmail and attempted murder.  When her sleuthing does not prevent Lily's murder and nearly leads to her own death Lt. Mayhew steps into the picture.  The two make an unlikely detective duo but each helps the other out, Mayhew saving Miss Murdock's life not once but twice, and together they uncover an involved and very deadly conspiracy.

D.B. Olsen is one of the many pseudonyms for mystery writer Dolores Hitchens who is probably best known for two crime novels written under her own name -- Sleep with Slander, called "the best traditional male private eye novel written by a woman" by Bill Pronzini in 1001 Midnights and Fools' Gold, a juvenile delinquent caper novel that became Godard's cult classic crime movie Bande à part.  In her early books written as Olsen she created two series characters Rachel Murdock and Professor Pennyfeather, most of which follow the template of traditional detective novels.

The Cat Saw Murder is a neatly done up puzzle of a mystery with some deft cluing, excellent characterization in the myriad beach hotel guests all of whom have multiple secrets, some offbeat humor, gory murders and a very neat surprise ending. The major clue that leads to the solution of the crime is not all that well hidden and I suspect veteran mystery readers will catch onto her extremely clever gimmick, one I've never seen used in any detective novel of any era. But for those who miss it the ending will be quite a surprise.  It certainly is one of the best examples of the least likely character as murderer. 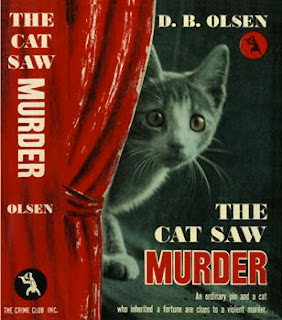 There is one very odd thing about this book I want to mention.  It's written in both present and past tenses.  The entire first chapter starts off in the present tense, foreshadows three specific events in the plot, then shifts back in time to start the tale at the beginning and stays in the past tense. But periodically throughout the book Hitchens will shift gears abruptly when she wants to do her Rinehart School bit with more HIBK and foreshadowing and weirdly she decides to write in the present tense. It's really jarring and makes no real sense to me.  This odd writing technique may explain why most of her previous books were published by the low rent houses like Phoenix Press and Bart House.  It just doesn't read smoothly.  I'm trying to find her first three books (all released under other pseudonyms) to see if she did this a lot. Only with this unusual cat mystery with a senior citizen stepping into the lead role did she manage to make it to the "big time" when Doubleday's Crime Club published the book.  She remained with the US Crime Club throughout most of her writing career -- well into the 1950s when she also teamed up with her husband to pen a few railroad police thrillers.

The Cat Saw Murder is --of course-- rather hard to find. After three years of looking I managed finally to get a cheap copy on eBay but it's beaten to hell and I ended up paying more for it than I would've had I found it in a store in similar condition. The Dell Mapback (my edition) is very scarce and extremely collectible because it's a low number in the series. As you can see above, it sports the giant keyhole logo that was used only on numbers 1 through 49. As of this writing there are exactly five copies for sale in various hardcover, paperback and digest editions.  The one Crime Club edition (without DJ) is only $22.50. A good price, I think, for a copy advertised in "near VG" condition.

Even if you hate the idea of a cat mystery I'd recommend you read this one both for its historical significance and for the story.  It may have started the entire subgenre and it's not at all what would anyone would expect from a cat mystery.
Posted by J F Norris at 1:11 AM