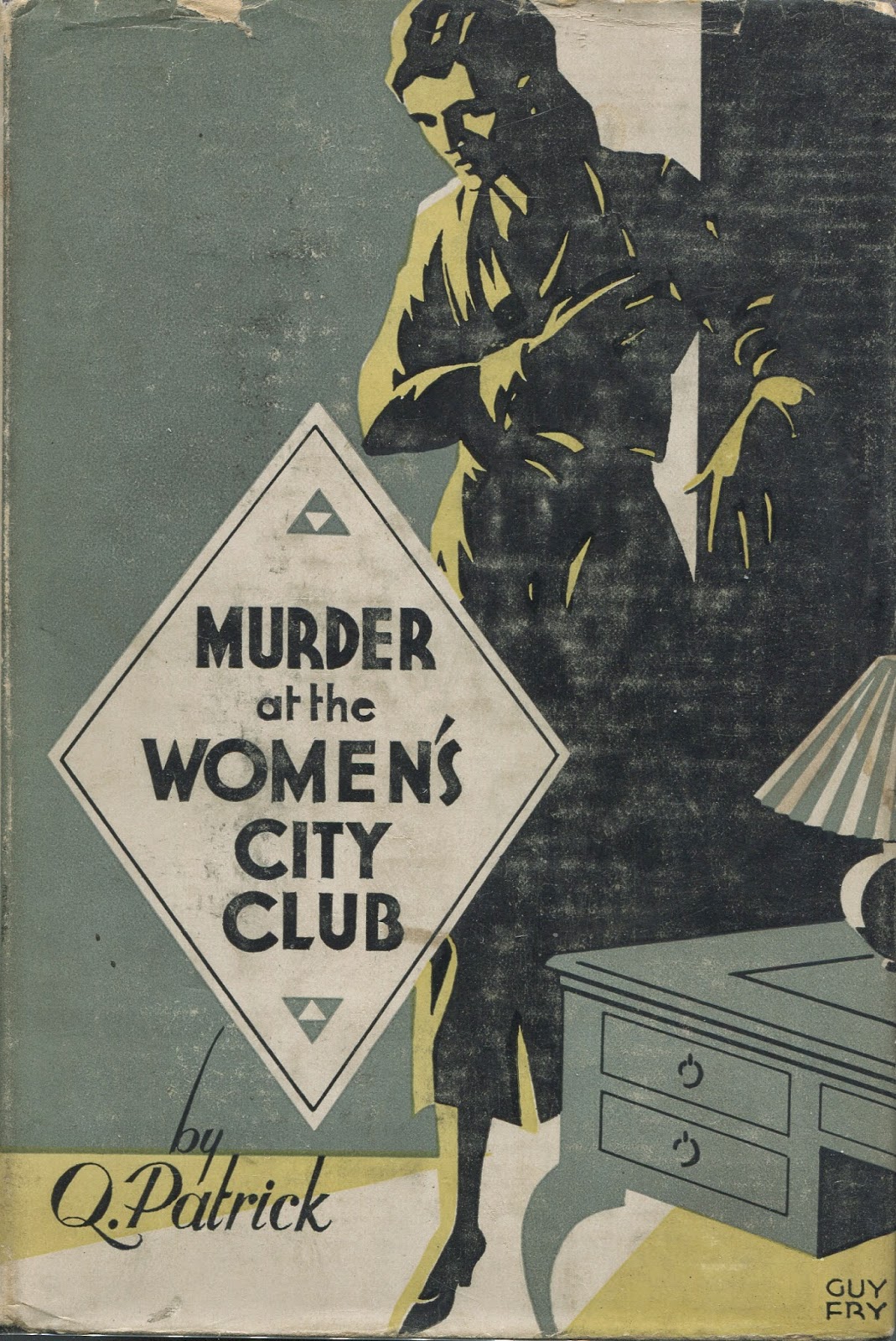 The prolific and multi-partnered Richard Wilson Webb teamed up with Martha Mott Kelley under his Q Patrick pseudonym and wrote two novels. Cottage Sinister (1931) was their first followed by Murder at the Women's City Club (1932). This second team effort from Webb and Kelley shows some slight improvement mostly in the tight plotting if not their tendency to indulge in nonsensical chit chat and quirky character traits. The most remarkable thing about Murder at the Women's City Club is that there are only three men among the large cast of characters: Inspector Manfred Boot,  Bob Dunn a journalist, and Sebastian Thurlow, fiancé to one of the women suspects.  The mostly female cast, therefore, allows the writing partners to spend a bit too much time with gossip, bitchy verbal catfights and other eccentricities in this dialogue-laden mystery novel. Oddly, while I was bothered by this kind of speech and chit chat in Cottage Sinister it works well in this book and is only enhanced by a baffling series of murders that border on the impossible crime subgenre.

Dr. Diana Saffron, ex-dean of a Women's Medical College and currently Professor of Internal Medicine, is being cared for by her devoted friend Deborah Entwhistle and watched over by her protégé Dr. Freda Carter at the Women's City Club. Dr. Saffron is irascible and demanding and very much disliked among the rest of the residents of the club. Among the permanent guests are Mrs. Mabel Mulvaney, the dictatorial president of the club, Constance Hoplinger, a ditzy mystery novelist; Amy Riddle, dutiful social services worker; and Millicent Trimmer, Secretary-Treasurer of the club and the one burdened with listening to the almost daily complaints from the other members. One night Dr. Saffron is found dead in her room having apparently committed suicide by turning on the gas tap located directly next to her bed. But there are whispers of murder when the Dr. Saffron's room is gone over by Inspector Boot. Too many oddities in the bedroom don't add up to a clear picture of death by suicide, like the partially open window and the puzzling discrepancy of the two gas taps, one open and one closed. When a second death by gas occurs Boot is convinced there is a mad killer hiding amongst the residents of the Women's City Club. 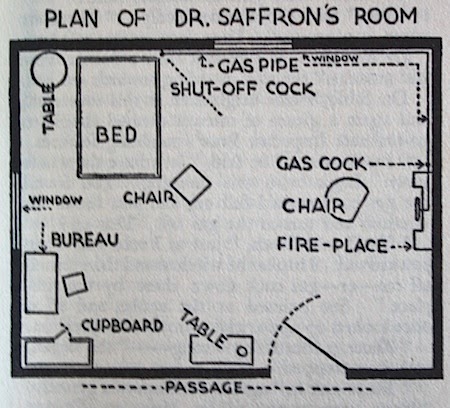 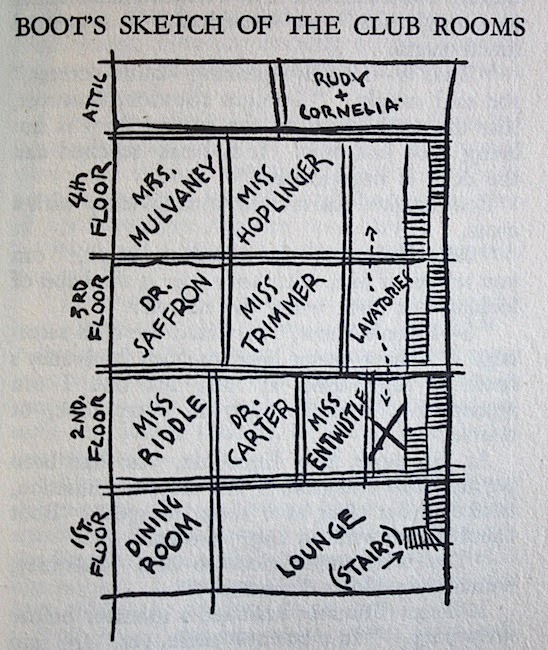 The plot is tricky and a bit convoluted with a neat twist in the finale. Manfred Boot is a gruff, not very pleasant policeman who does admirable detective work. In the end, however, he is upstaged by Deborah Entwhistle. She has been doing detective work of her own both on and offstage and comes up with the somewhat startling solution to the deaths. And there is also a final surprise in the last sentence.

Amid the fine detective work by both professional and amateur is a primary focus on the characters' idiosyncrasies. The action is enlivened by absurd exclamations from Constance Hoplinger (published under the pseudonym "Gerald Strong") who treats the murder investigation as a sort of writer's laboratory. She plans to use the circumstances surrounding Dr. Saffron's death for an exciting chapter in her current still unfinished novel and keeps pestering Boot for insider police information to give her work authenticity. Webb and Kelly have also thrown into the pot a pair of not so funny comic servants. They are a married black couple who, typically for this era, behave and speak like cartoons with their embarrassing phonetically rendered dialogue and foolish superstitious antics as when one literally jumps into a closet to hide from the police. The maid Cornelia, especially, seems to have escaped from the pages of an Octavus Roy Cohen book and seems very out of place here. 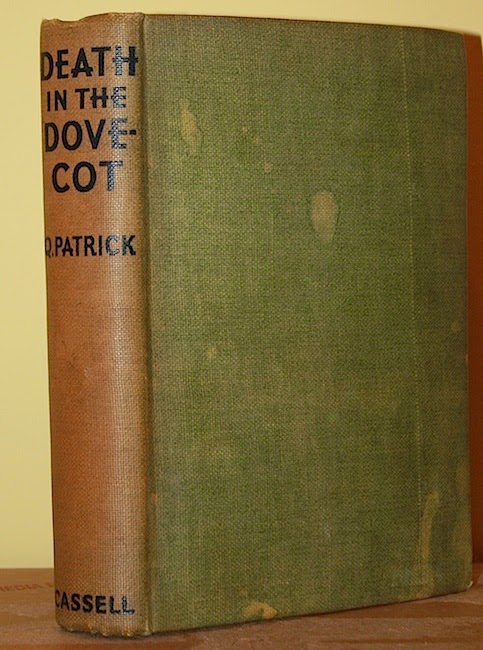 I liked the sequence when Boot having had his fill of "Gerald Strong", aka Miss Hoplinger, decides to read one of her books to get an idea if she's smarter than she appears. He discovers in the pages of The Black Serpent a plot with remarkable similarities to the murders committed at the Women's City Club. In Strong's novel the victim was murdered by automobile exhaust and the serpent of the title was a black rubber tube run from the car's tailpipe into a bedroom via a cracked window. He begins to think that either Miss Hoplinger may in fact be a bit more sinister than she presents herself or that one of the women in the club has a perverse sense of humor and has it in for the mystery novelist.

Murder at the Women's City Club is one of the most difficult books in the Q Patrick canon to locate.  Unlike most of the books published under this pseudonym it was not reprinted in paperback by Popular Library in the United States, nor am I aware of a British paperback edition. It exists as far as I know only in a scarce hardcover from the little known (and short-lived) Philadelphia publisher Roland Swain and in an even more uncommon British edition from Cassell under the title Death in the Dovecot. I was lucky enough to find one amid the ocean of used books in the eBay auctions a while ago and paid only $65, but that was an utter fluke. It should've been priced probably twice that amount. While this book has a few elements to recommend it I wouldn't break my back looking for a copy. The few that are for sale online are in the collector's price range starting at $100 and go up to $650.