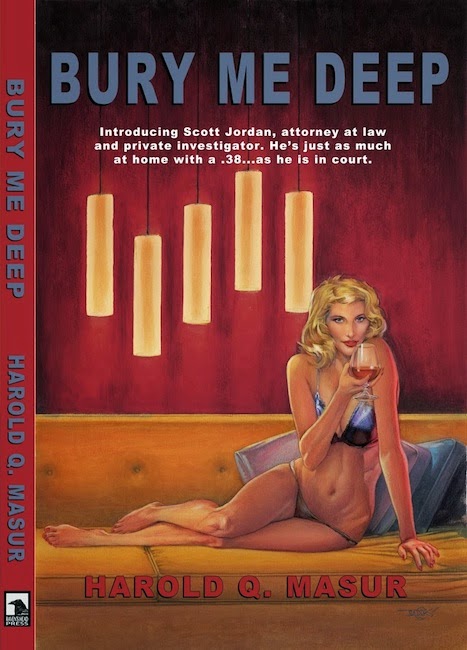 From the Shameless Self-Promotion Department:

It's the latest reprint of a (somewhat) forgotten pulp classic from Raven's Head Press. Bury Me Deep (1947) by Harold Q Masur was the first of eleven fast paced, semi hard-boiled, detective novels featuring the hip and with it Manhattan lawyer Scott Jordan. Taking his cue from Raymond Chandler who he admits was his inspiration to write for the pulp magazines Masur pens a tale of avarice, manipulation, duplicity and murder. A new trade paperback edition was released a few weeks ago and is now available for purchase from amazon.com or by visiting Raven's Head Press. Our new cover design by artist Doug Klauba is a nod to the original 1st paperback edition (see below) published by Pocket Books back in 1948. Verna Ford, the blond in her underwear, has served as the inspiration for two previous paperback covers. Why not? Scantily clad women -- whether lounging and drinking from a brandy snifter or being threatened and menaced by dark men with guns -- have been the iconic imagery for pulp magazines and paperbacks since the 1920s. 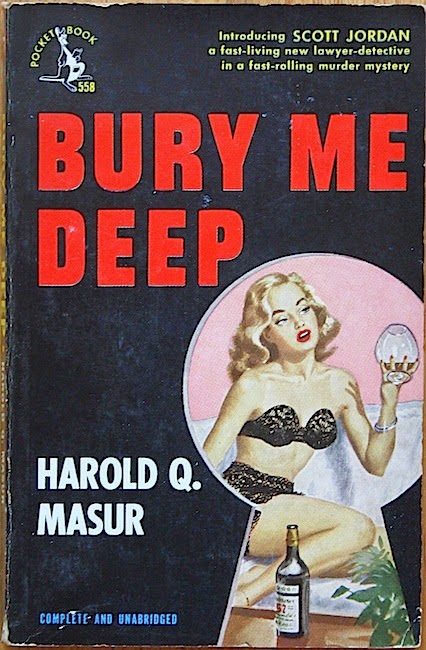 It opens with Jordan discovering Verna in her lingerie helping herself to expensive brandy in the appropriate snifter. She's been waiting for someone in Jordan's apartment but it cant' possibly be him. He was away in Miami and cut his trip short to come home. No one was expecting him. Verna tries to put the moves on Jordan but he won't have any of it. Then she downs her brandy and immediately passes out. Jordan foolishly takes her to a cab, bribes the driver to babysit her until she comes to, and asks him to let her off at her home. But the driver soon discovers Verna is not dead drunk, just dead. The lawyer is immediately suspected of doing her in and trying to dispose of the body. So he decides to find out who she is, why she was in his apartment and who poisoned her brandy. The case becomes a lot more complicated when it turns out Verna was involved in a legal battle involving a will that leaves millions of dollars to the proper surviving relative of a husband and wife who died in a car crash. Lots of down and dirty action that turns pretty nasty. Villainy and double crossing galore! It's a corker, gang.

GIVEAWAY TIME! A full review of the book will appear tomorrow, but I wanted to take the time to help promote the Raven's Head Press release of this new editions. As usual I'm giving away three copies of Bury Me Deep. Don't all raise your hands at once. (First of all I can't see you. This is the internet, you know) Sorry, but this giveaway is confined to USA and Canada. If you'd like to be considered simply leave a comment below. Three names will be selected by a highly irrational process involving a blindfold and a dart board. OK, not really. Winners be selected at random, etc, etc. You know the drill. I'll announce the winners probably next Friday to allow for Labor Day revelers who may be drinking and BBQ-ing and whooping it up away from their computers to catch up on their blog reading. 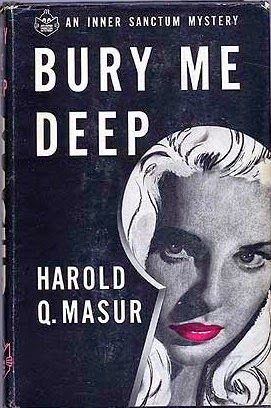 If you like the good old pulp style action of fist fights in a barroom, slinky dames pawing the detective hero, no good skunks and slimy gangster types, sleazy dives and smoke filled saloons then the Scott Jordan books are right up your alley. I was genuinely surprised that I found Bury Me Deep one of the best of the Chandler imitators. Plus it's set in New York! How can you beat murder and deceit and treachery in late 1940s Manhattan? Harold Q. Masur was quite the interesting guy, too. Read this fascinating interview he gave Gary Lovisi back in 1992 when Masur was 83. Among many intriguing anecdotes he talks about how Bury Me Deep came to be written, his inspiration in Chandler, and how he walked into Simon and Schuster's offices with the manuscript in hand daring them to publish it. What chutzpah! He was also one very involved with the Mystery of Writers of America serving a stint as president in the 70s and as their legal counsel throughout his lifetime.