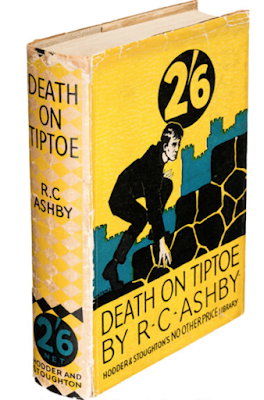 A house party in a 12th century Norman castle in Wales is the setting for Death on Tiptoe (1931). The characters make up quite a Christie-like cast: young dissolute and irresponsible heir; portrait artist and womanizer; flirtatious heiress; pouty melodramatic young woman jilted by the artist; lovestruck governess; two bratty children; vengeful British Major; reserved and sensible barrister; failed diplomat who is an utter twit; his wife who is love with someone else; and the host and hostess, Sir Harry and Lady Undine Stacey.

It is Lady Stacey — a transplanted French woman with pretensions to becoming a great baronial estate holder — who is the victim. The opening chapters quite brilliantly plant the seeds for her cruel murder, and there are at least four characters who outright threaten her prior to her body being discovered three weeks later in a chest in the attic where she had hid during a game of hide and seek, an entertainment she arranged for her guests.

Cleverly done, fairly well clued, with quite a bit of misdirection. The novel culminates in a melodramatic ending with a somewhat surprising murderer and an intriguing motive. Ashby would later expand the idea of this Gothic detective novel in He Arrived at Dusk (my review of that book is at Mystery*File here ), a far better book with more effective use of folklore, legends and supernatural content.

R(uby). C(onstance). Ashby is the alter ego of Ruby Ferguson the name under which she is better known. From 1949 through 1965 Ferguson was a popular writer of children's books and romance novels. As Ashby (her maiden name) she wrote a handful of detective novels and suspense thrillers with Gothic overtones. A few years ago Death on Tiptoe was reprinted by Greyladies Press, an independent publisher located in Scotland, but I checked their website and that edition is no longer for sale. However, you might luck out on the used book websites and find a copy.

(This is a slightly altered version of a review I originally wrote for Steve Lewis' superb website Mystery*File.)
Posted by J F Norris at 10:10 AM