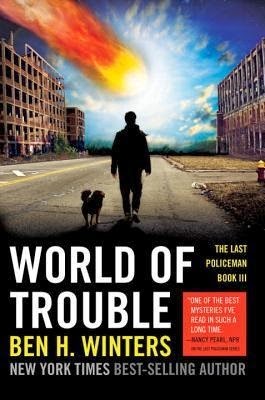 Usually I avoid dystopian and apocalyptic fiction. I'm not all that interested in the dark imagination of writers showing human behavior at its most hedonistic and desperate. I live in a chaotic city and I ride public transportation. I get enough of this on a daily basis without the fear of the end of the world literally looming over my head.

Ben H. Winters, however, in his final installment of his "Last Policeman" trilogy has dreamed up a world facing inevitable doom that is plausible in its mix of indulgence and dread. As many readers already know the premise behind this trilogy is Earth's impending collision with asteroid 2011GV1 predicted to strike the planet sometime in October and all of civilization is counting down to that impact date. Over the course of the first two books we have seen towns all across the United States disintegrate in lawlessness and paranoia. But periodically, Winters adds a very human touch in his depiction of this end of the world scenario. Drunks and drug addicts feast on roasted chicken while blaring classic rock until Doomsday.  This is a world where "Bucket List" criminals, fantasists who have always wanted to loot and rape and murder, can now do so without fear of arrest, trial and incarceration.  "Last Call" parties are the trendy way to go out big and those revellers brave enough to take part in one can indulge in one last party cruise before they throw in the towel on Life and allow their cruise director to blow them up at sea. Now there's mass suicide with a twist! Crime and death and traps are omnipresent. And Hank Palace, Winters' last policeman hero, is looking for his sister in this final volume.

In the previous two books Winters was finding both his voice and his way around a new genre.  Though The Last Policeman won an Edgar, and deservedly so for its sheer inventiveness, his work with the structure and tropes of the detective novel were rudimentary and at times very disappointing. In Countdown City, the second book, he abandoned the detective novel format instead opting for an adventure thriller that focussed more on science fiction elements than crime.  Finally, in World of Trouble Winters seems to have found his footing. He treads more assuredly in the land of the detective novel and there are fine touches of retro detection. Palace is forced to resort to the old fashioned methods in this world where the internet has been destroyed and computers and crime labs are useless. He carries with him a magnifying glass and often finds himself examining clues and evidence like the most hackneyed of comic detectives. Yet, in this dystopian world of ravaged shopping malls and citizens armed with high powered rifles a policeman with a magnifying glass is ironically original and inventive.

Probably the best parts of the book are when Winters allows Palace long scenes with some of the most endearing yet dangerous supporting characters in the trilogy.  Notable are the young couple living in an RV who befriend Hank Palace and invite him to their daily chicken roast even while pointing automatic rifles at him throughout his visit.  An extended sequence on an Amish farm is the highlight of the book when Hank meets up with Atlee Miller, a man who has stooped to lying and kidnapping to protect his family from the truth of what is in store for the entire planet.

The story itself is the age old cherchez la femme plot with Palace trying to locate his sister and his determination to solve one last mysterious murder and learn the identity of the victim. The plot is well done, the detection is genuine and surprisingly fair play, and there are an ample amount of twists and surprises. World of Trouble was well worth the wait and its reassuring to see a young crime writer returning to the fundamentals of the mystery novel and concocting an intriguing and moving novel of raw human emotion. Often in reading these types of trilogies the reader finds as he progresses to the last volume not satisfaction but a let down in an anticlimactic conclusion. Winters has lived up to the promise of his first award winning novel and has delivered a stunning conclusion that mixes the mystery of crime with the mystery of the human heart. As the characters face the inevitable end one of the most powerful images is that of one human reaching out for the hand of another. Winters reminds us that -- Apocalypse or not -- in the end all we really have is one another.
Posted by J F Norris at 9:09 AM