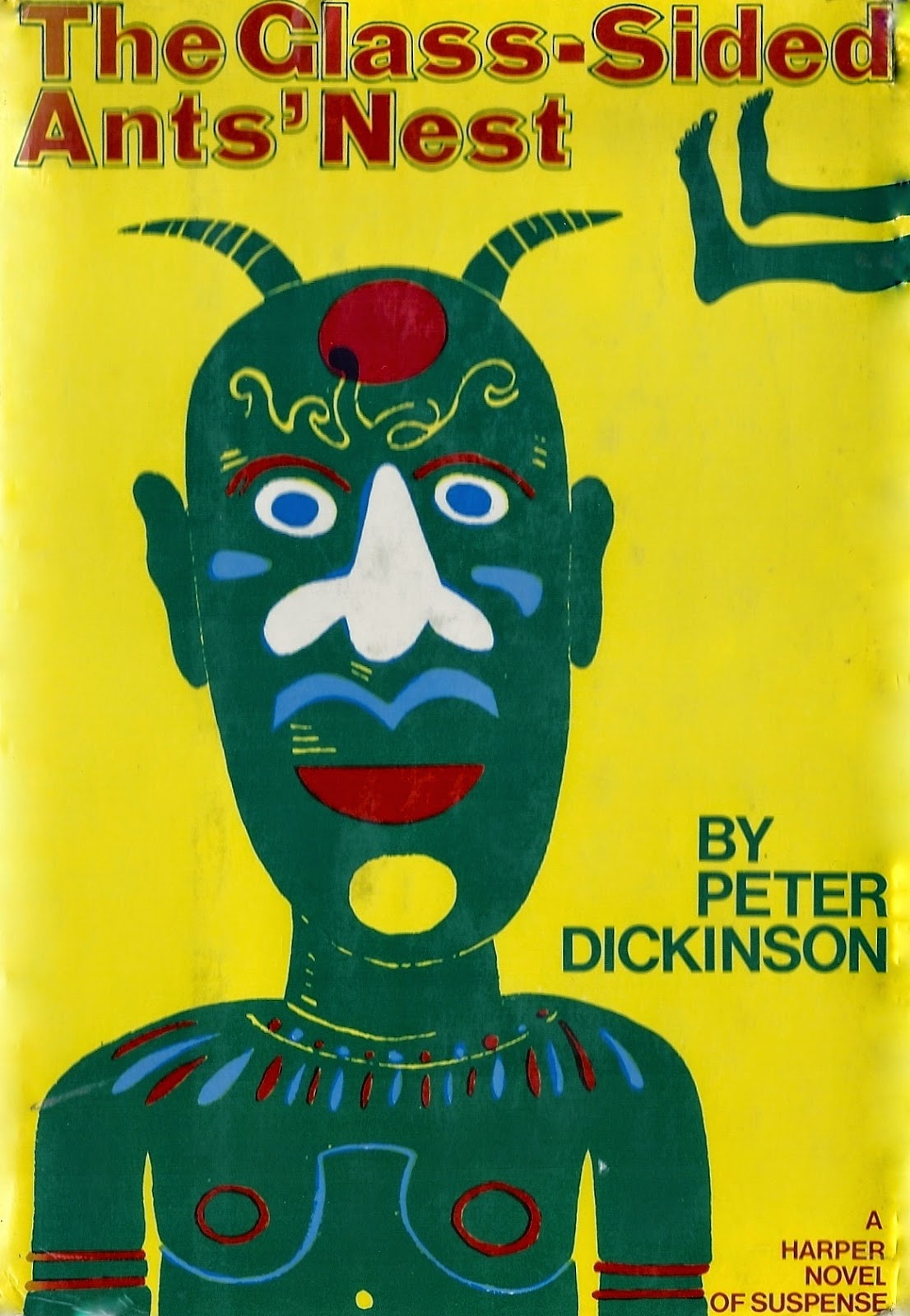 “That was the whole trouble with police work. You come plunging in, a jagged Stone Age knife, to probe the delicate tissues of people’s relationships, and of course you destroy far more than you discover. And even what you discover will never be the same as it was before you came; the nubbly scars of your passage will remain.”

I seem to be on a roll with anthropological mysteries. First, The Glass Spear taught me all about aboriginal Australia, coming soon a visit to Peru and the ancient Incans, and now I get the amazingly inventive world of the Ku tribe as imagined by Peter Dickinson in his debut mystery novel. Dickinson is a much underappreciated writer, something of an acquired taste, and always surprising in how different each book can be.

James Pibble is a Scotland Yard inspector who is assigned the oddball cases. The murder in The Glass-Sided Ants' Nest (1968) is typical of the strange crimes that have become his specialty. In a house where the last surviving members of a little known tribe from New Guinea have settled one of their members has been found bludgeoned. The weapon is a wooden balustrade ornament in the shape of an owl. What makes the crime so unusual is that the tribe have been living according to their laws and cultural mores and the victim is a revered elder. Men and women live in separate areas of the house in dorm-like bedrooms and it is forbidden for either sex to visit the quarters of the opposite sex. The rules of tribal interaction are complicated but strictly adhered to and it seems that no one among the Kus could have committed the murder. Who then did in the old man? It's an impossible crime of sorts which make the sharp witted inspector imagining bizarre entries into the house. He even contemplates the possibility of an outsider having climbed up the side of the stone house and entering through an easily opened window.

The imagination involved in creating an entire culture is impressive. Dickinson invents social customs, tribal rituals, a hierarchy of members and gender role rules that make the Ku tribe seem to be as real as any group studied by Margaret Mead or Richard Leakey. The murder investigation reveals multiple hidden relationships and ulterior motives among some the tribe members. The youngest Ku, for instance, seems to be exploiting beliefs in magic for his own ends. But no one is talking and Pibble is continually frustrated by the reticence and stubbornness of the Kus.

One of the most bizarre aspects of the story is the relationship between Eve Mackenzie, daughter of Scottish missionaries who was raised in New Guinea, and her husband Paul Ku. She fell in love with Paul as a young girl while still living in New Guinea and becoming an anthropologist there. The Kus forbid marriage outside of their tribe but oddly male/male relationships outside of the tribe are allowed. In order to allow Eve and Paul to fulfill their love the tribe members decide to view and treat Eve as if she were a man, referring to her as him. They make her undergo a special ritual that allows for a male/male love relationship. Paul is then somewhat of an outcast and viewed less than a man, but he and Eve are allowed to "marry." 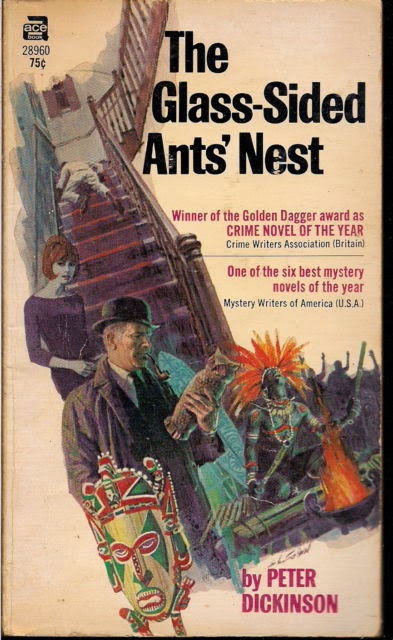 Flagg Terrace, the metaphorical glass-sided ants' nest (ant farm to us Americans) of the title, becomes a prominent character too. All of the tenants suddenly become suspects in the murder of Aaron Ku. When it is learned that he served as member of the trust that owns the property and that he was intent on selling the entire building Pibble begins to see motives multiplying. Other real estate schemes are uncovered. Pibble needs to sort through skulduggery in the business world as well as the intricacies of the Kus' tribal life and their reluctance to reveal the truth of their relationships to the outside world.

There is a lot of good character work here. Notable among the supporting players are Mr. Evan Evans, a real estate agent; and Nancy Hermitage, an "actress" and "professional escort". They are the most colorful and fascinating of the large cast of characters. Dickinson also has a great skill at creating character through dialogue, a talent that is all too often lacking in contemporary fiction of any kind. People talk and we immediately know who they are, not just in what they say, but how they say it. Vocabulary changes drastically from character to character. This is the hallmark of a genuinely talented novelist.

Pibble went on to play the lead in five other detective novels. Each one is unique and strange. Dickinson concocts mystery novels like no other writer of his era...or any era for that matter. The Old English Peep Show tells of a murder in a Victorian country house turned into a theme park, long before the theme park craze took over popular culture. ESP and telepathy are side effects of a mysterious disease afflicting the children in Sleep and His Brother. Pibble must attempt to free his friend Sir Francis who seems to be a prisoner of a weird cult awaiting the apocalypse in The Sinful Stones. Readers looking for something truly different and original in mystery fiction ought to investigate the James Pibble novels or any of the many unusual crime novels by Peter Dickinson. Unique is the best adjective I can come up with to describe his books, but even that word seems an understatement. 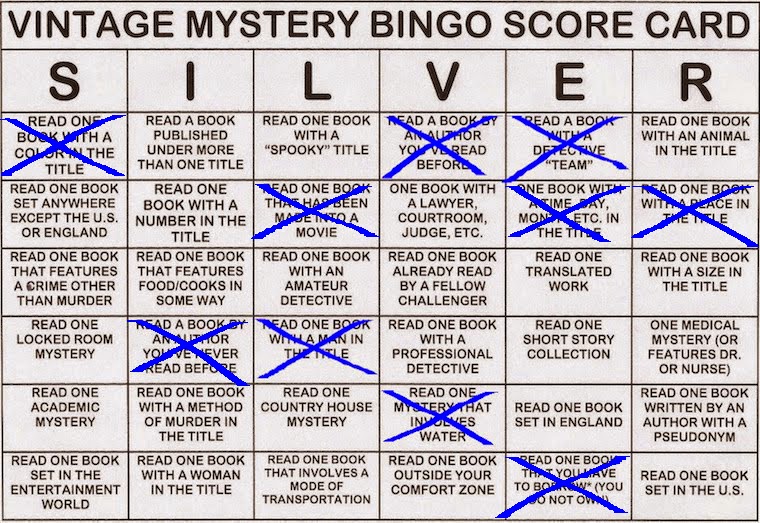 Reading Challenge update: Silver Age Bingo Card, space E6 -- "A book you have to borrow." I found this one in my local library.
Posted by J F Norris at 10:05 AM