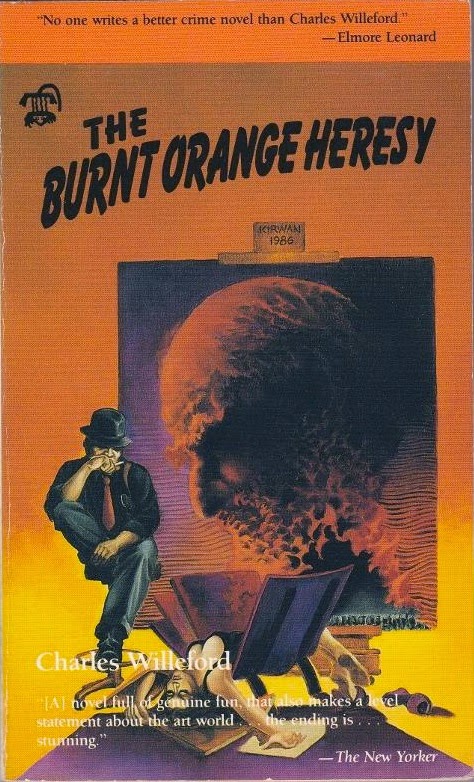 I love nothing more than a good skewering of the intelligentsia. Charles Willeford has written one of best in his often irreverent depiction of the 1970s art world as reported by James Figueras, an art critic of immense ego and cynical worldview who serves as narrator of The Burnt Orange Heresy (1971). More satire than crime novel yet not without a generous smattering of violent crimes and brutal explosive violence The Burnt Orange Heresy offers Willeford a chance to show off his knowledge of the art world while simultaneously creating one of the most compellingly realistic fictional artists of all time.

Willeford is so cunning in how he tells his tale of modern art and the arcane world of reclusive eccentric painters that he completely took me in. He fooled this gullible reader. While reading the lengthy lecture Figueras gives his girlfriend Berenice about the origins of Nihilistic Surrealism I began taking notes on all the styles and painters mentioned. Utterly foreign to me were the names of Willi Büttner and his Scatölögieschul, Belgian brothers Hans & Hal Grimm nor had I ever heard of Nihilistic Surrealism. I dutifully headed to that miracle we know as Google to scour the internet for signs of life among these names and terms. Results? 100% nothing. Turns out all of them sprang from the imagination of the writer. Willeford was so convincing in his presentation of these artists and their various schools of painting I believed they actually existed. The lecture Figueras gives -- peppered with references to well known artists like Miró, Picasso, De Chirico and Man Ray -- is so eruditely told I just accepted all of it as truthful. Part of the con begins before the reader even starts the book. Willeford dedicates the book to Jacques Debierue and gives his birth and death dates followed by a Latin memorial phrase. Of course Debierue is as fictional as the entire novel, but for a brief moment I was completely taken in thinking all of the painters and artists mentioned were real.

The biographical sketch in the rear of my Black Lizard edition mentions that Willeford studied art in Paris and Peru and was at one time a painter in his life. The Burnt Orange Heresy is both a love letter to and a diatribe against a con artist's world of contemporary art. Figueras is the perfect personality to become a con artist. When he is offered a rare opportunity to interview the reclusive genius painter Debierue he jumps at the chance. Never mind that in order to gain access to the artist, his home and studio he must also steal one painting and bring it back to the collector who knows where the artist lives. There is no moral dilemma for Figueras. If he can be the first person to interview Debierue and also be the first to view his new set of paintings and artwork he can revive his dying career as art critic, become a celebrity himself. It's the chance of a lifetime. Art theft? A mere stumbling block to a greater vainglorious end.

But there is a one huge surprise in store for Figueras when he finally manages to penetrate the hallowed studio housing Debierue's collection of art. And his discovery of Debierue's secret leads him into more crime and savage violence. The Burnt Orange Heresy makes for some exciting reading both as an excellent example of noir in the art world and a insightful satire of the creation and selling of fine art as the ultimate con game. 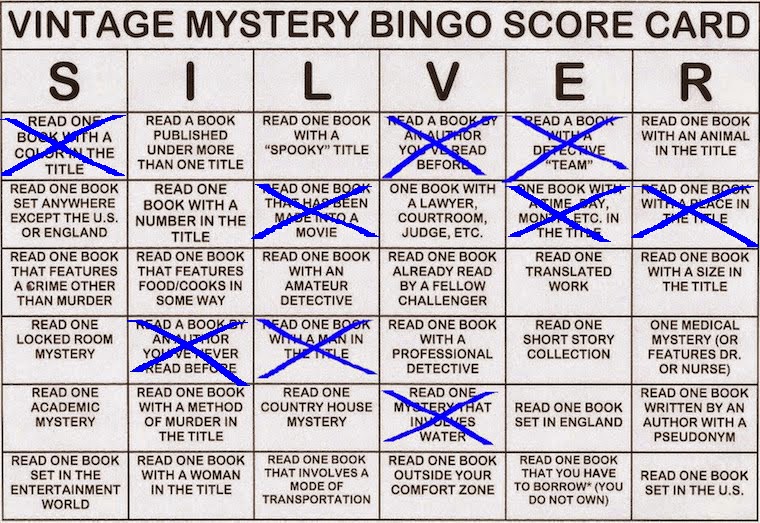 Reading Challenge update: Silver Age Bingo card, space S1 - "Book with a Color in the Title"
Posted by J F Norris at 10:03 AM