﻿Sometimes the discovery of a forgotten writer yields such a surprising variety of interesting work it's both a blessing and a curse. Exhibit A: Sidney Hobson Courtier who later was published more simply as S.H. Courtier. With the exception of two books reissued by the independent Australian publisher Wakefield Press none of his books are in print and many of them are near impossible to get a hold of. As usual when a writer's books go out of print and copies are hard to come by the prices being charged in the rapidly vanishing used book market are way off base. Why I wonder does someone charge over $50 for a beat up paperback by a relatively obscure writer whose books have been out of print for decades? What is the point? Can the seller tell you anything about the writer? Usually not. Does he even care? "Oh it's scarce," you'll be told. Scarcity does not automatically make a book valuable. Plain and simple. Good books that deserve to be read cannot be had by the general public when avaricious booksellers make these books unaffordable by charging absurdly exorbitant prices. But more to the point why when a writer is as good as Courtier aren't more of his books in print?

Take for instance Courtier’s very first mystery novel. Unique in concept, told with suspense and excitement, an original work both as a fine example of detective fiction and a good novel. In the guise of a confounding murder mystery The Glass Spear (1950) explores the relationship between aboriginal Australian people and the dominating white man. It's a fascinating blend of the traditional country house mystery spiced up with a generous amount of Gothic atmosphere and Australian tribal mysticism. Imagine if you can a detective novel written by Arthur Upfield in collaboration with Charlotte Bronte and Tony Hillerman and you are on your way to understanding how unusual and bewitching The Glass Spear can be.

Dick Thewan fresh out of the Australian army is summoned back to Kinie Ger, the Australian sheep ranch where he grew up. His boyhood friend Jacqueline (Jay to her friends) has appealed to him to help out with the mismanagement of the ranch and some other troubles brewing in the household. A few miles short of the entrance to the ranch a falling tree branch causes a near car wreck almost crushing Dick inside. He can't help but think of it as an omen. Oddly, in his tortured imagination he thinks it might have been a murder attempt. Does someone want him to stay away so much that they would resort to murder?

The homestead at Kinie Ger is in turmoil. Dick's childhood friend and one of the current ranch hands Steve and Jay are odds. Steve, a former prisoner of war, is a volatile personality causing more trouble than he's worth at the ranch. And the reclusive matriarch Huldah seems to have powerful control over everyone as she makes her demands and orders heard through the internal phone system that works as a sort of intercom. For the past several years Huldah has remained in a self-imposed exile at Kinie Ger, never leaving her bedroom suite at the front of the house. She allows only two people to enter her private domain -- Lucy Danes, who acts as cook and housekeeper for her; and Burton Lensell "nominal head of Kinie Ger, intense anthropologist, reluctant sheepman, and bewildered guardian to a set of children who stood in various degrees of relationship to him." Huldah's presence adds a Jane Eyre Gothicism to the story, a mysterious and imperious woman whose motives for shutting herself up remain hidden to all.

﻿ ﻿ Burton is busy with preparations for the upcoming Easter corroboree -- a ceremonial ritual involving tribal costumes and masks, dance and acting. Several members of the ranch are involved in the theatrical presentation to take place on a sacred island accessible only by boat. At the climactic moment of the play the participants dance around a tribal mound. Burton notices that the mound so painstakingly created and placed dead center has moved several feet from its original spot. During the dance the actors stab at the mound as part of an aboriginal ritual and in doing so uncover a dead body. It is Henry Carpenty, a depised local rancher and troublemaker. His throat is cut. An autopsy reveals the fatal wound to have been caused by the glass arrowhead of a spear kept in a private museum back at Kinie Ger.

There are hints of the supernatural, too. A prowler has been seen around the grounds. Dick finds footprints that indicate the use of footwear woven of bark, feathers,and fur and believed by natives to render the wearer invisible. This is a work of kurdaitcha -- a kind of aboriginal magic usually with evil intent. When a second murder occurs, this time in the locked museum at Kinie Ger, Superintendent Ambrose Mahon begins to think that a clever murderer is exploiting the fearful aspects of tribal culture to confound the police and frighten the locals.

The Glass Spear is an excellent example of an anthropological detective novel. Courtier includes a glossary of tribal words and Australian flora and fauna to help non-Aussies in understanding the often alien world of the aborigines. The detective work is top notch with plenty of puzzling mysteries surrounding the two deaths not the least of which is the mystery surrounding the intimidating Huldah. The story culminates in a shocking surprise and a revelation of a family secret that has shamed Kinie Ger for decades.

I've read many mystery novels by Australian writers using their country's rich culture and distinctive landscape, but I've never encountered a book like The Glass Spear which is so entirely Australian. Here is a story that can only have taken place Down Under. And I'll say no more for fear of giving away the best parts. If you come across a copy of this book I'd advise you to snap it up and read it. It's one of the most unique novels I've read this year. 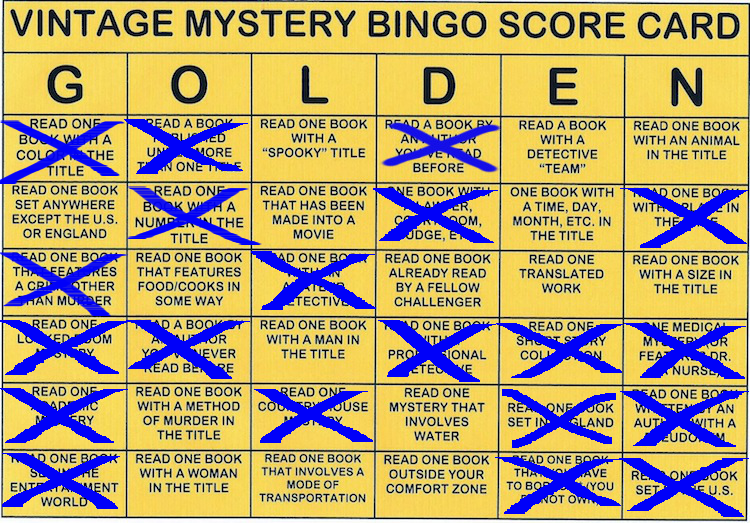