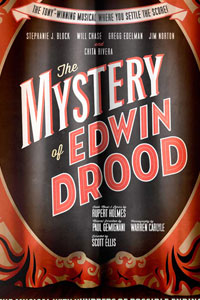 The winners of the "Challenge to the Reader" Trivia Contest will be posted later this evening. I was away from Dec 14 - Dec 17 in New York City for my big blast of a birthday bash. We saw five plays in three days including the fabulously fun Mystery of Edwin Drood, ate at three amazing restaurants, avoided Guy Fieri's Times Square tourist trap, saw a musical version of The Silence of the Lambs that was hysterical and filthy, talked with Ed Asner and got his autograph, took Paul Rudd's picture by the stage door of the Cort Theater, and tried our best to avoid the insanity of SantaCon. Go here if you are clueless about that bizarre urban holiday "festivity".  Reviews of the plays I saw will appear in "Stage Blood" posts in the coming days.

The contest was easier this year and I was hoping for an increase in participants. Just the opposite happened. I was disappointed by the very low number of entrants. This will most likely be the second and final trivia contest. More anon...
Posted by J F Norris at 1:36 PM