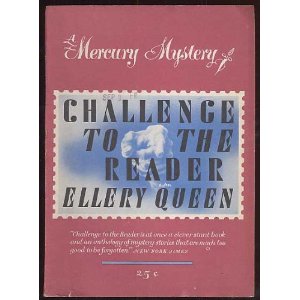 May I have the envelope please? The winner of the "Challenge to the Reader" Second Annual Trivia contest is...

Bev of the blog My Reader's Block with a whopping score of 105 out of a possible 110!

Second prize: Pietro (all the way from Italy!)  who blogs at  Death Can Read with a score 104.

Talk about a close race, my friends. There was no third prize winner. I'll leave that to our clever reading sleuths to figure out.

Kudos to our winners! I might add that each player successfully answered ALL the bonus questions correctly. You are excellent sleuths, the two of you, with some inductive reasoning and superior internet searching skills that are to be commended.

You each will be receiving an email from me with a list of books from which you will be able to choose your prizes. Thanks for taking part!

Answers for all those curious are below.

I. ALTERNATE TITLES (1 point each)

Below are titles of books as published in England and Australia.You must give the renamed title in its American edition.

1. Mr Jelly's Business = Murder Down Under by Arthur W. Upfield
2. Vegetable Duck = Too Many Suspects by John Rhode
3. Surfeit of Lampreys =  Death of a Peer  by Ngaio Marsh
4. The Ten Teacups = The Peacock Feather Murders by Carter Dickson
5. There Came Both Mist and Snow = A Comedy of Terrors  by Michael Innes
6. Why Didn't They Ask Evans? = The Boomerang Clue by Agatha Christie
7. The Hollow Man = The Three Coffins by John Dickson Carr
8. Find Actor Hart = The Portrait of Jirjohn Cobb  by Harry Stephen Keeler
9. The Box Office Murders = The Purple Sickle Murders  by Freeman Wills Crofts
10. Burglars in Bucks = The Berkshire Mystery by GDH & M Coles.

Now do the opposite. Below are the American titles, you supply the British (or Australian) title

1. The Hand of Fu Manchu = The Si-Fan Mysteries  by Sax Rohmer
2. Remembered Death = Sparkling Cyanide by Agatha Christie
3. Curse of the Bronze Lamp = Lord of the Sorcerers by Carter Dickson
4. The Crime on the Solent = Mystery on Southhampton Water by Freeman Wills Crofts
5. A Wreath for Rivera = Swing, Brother, Swing  by Ngaio Marsh
6. The Problem of the Green Capsule = The Black Spectacles by John Dickson Carr
7. The Face of the Man of Saturn = The Crilly Court Mystery by Harry Stephen Keeler
8. Dr. Priestley Lays a Trap = The Motor Rally Mystery by John Rhode
9. No Footprints in the Bush = Bushranger of the Skies  by Arthur W. Upfield
10. Knocked for a Loop = The Double Frame by Craig Rice

II. EVIDENCE (1 point each)
Match the clue to the book in which it appears.

1. Handpainted door with recent smears C. The Moonstone
2. Bookshop fronting a pornography operation G. The Big Sleep
3. Scarab fired from a slingshot (catapult) L. Murder Must Advertise
4. Decaying corpse found in a deed box K. Smallbone Deceased
5. A pair of missing boots H. The Hound of the Baskervilles
6. Doctored pitcher of cocktails N. The Deadly Truth (McCloy)
7. Recipe for saucisse minuit A. Too Many Cooks
8. Handkerchief embroidered with an H    J. Murder on the Orient Express
9. Murder victim's clothes turned backwards E. The Chinese Orange Mystery
10. Decapitated head found in pot of stew O. The Rising of the Moon (Mitchell)
11. An antique automaton M. The Crooked Hinge
12. Cryptic drawing on a slip of paper B. The Case of the Seven of Calvary
13. An astrological chart D. The Stars Spell Death
14. An Egyptian sarcophagus I. The Scarab Murder Case
15. A forgotten shopping list F. Warrant for X

III. DISPATCHED WITH APLOMB (1 point each)
Match the murder method to the book in which it appears.

1. Victim dragged behind a car H. The Grindle Nightmare
2. Liquid nitrogen sprayed via a shower head K. The Rose Bath Riddle
3. Poisoned in a theater dressing room A. Exit Charlie
4. Strangulation with blue and pink cords  E. Cat of Many Tails
5. Defenestration M. The Clue in the Air
6. Victim shot while in a bathtub B. The Case of the Velvet Claws
7. Natural gas poisoning C. The Three Taps
8. Crushed to death by a stone bear   D. And Then There Were None
9. Bee stings O. A Taste for Honey (Heard)
10. Drowning in a scuttled boat J. Rebecca
11. Bludgeoned with a magnum of champagne N. Vintage Murder (Marsh)
12. Crossbow F. The Judas Window
13. Murdered while being operated on L. Green for Danger
14. Strangled with a lariat I. Murder on Wheels (Palmer)
15. Bludgeoned with a hunk of frozen meat G. "Lamb to the Slaughter"

1. Todd McKinnon, Charles Latimer, Ariadne Oliver
They are all mystery writers. McKinnon appears in books written by Lenore Glen Offord, Latimer is the creation of Eric Ambler, and Mrs. Oliver, of course, appears with Poirot in several books by Agatha Christie.

2. Sherlock Holmes, Gideon Fell, Nigel Strangeways
Each detective is based on a real person.  Holmes was inspired by Dr. Joseph Bell, Dr. Fell is based on the physiognomy and blustery manner of G. K. Chesterton, Nigel Strangeways was initially modelled on the poet W.H. Auden. No one got this correct. I didn't think it was the most difficult question in this section, but I guess it wasn't all that apparent.

7. Tony Murchison, Daisy Armstrong, Chris Dobie
All characters are kidnapped children.  Respectively, they appear in Nightmare in Manhattan by Thomas Walsh, Murder on the Orient Express by Agatha Christie, and Time of Terror by Lionel White.

8. Saul Panzer, Arnie Walters, Paul Drake
Private detectives in the employ of a series detective. Respectively, they work for Nero Wolfe, Lew Archer (in only two books), and Perry Mason.

9. Julie Bailey, Virginia Dodge, Linda Goldenberg Arden
Probably the most difficult of the question in this section. Each character is motivated by revenge in the action of the story and each a character lost a loved one to an act of violence. Respectively, they appear in The Bride Wore Black by Cornell Woolrich, Killer's Wedge by Ed McBain, and Murder on the Orient Express. Yes, that book showed up a lot in this quiz. Don't ask me why. I must've been haunted by it.

In this second part find the commonality in the books named below:

1. Antidote to Venom by Freeman Wills Crofts, The Penguin Pool Murder by Stuart Palmer
Animals in captivity play a part in the action. A snake is stolen from a zoo in the first and its venom used to commit murder. A dead body is found in a penguin exhibit at an aquarium in the other book. This was my lame question for the contest. Don't all "Boo" at once.

2. The Scarecrow Murders by Frederick Kummer, Sign of Fear by August Derleth
The detective in each story is a judge.  Amazingly, there is also another commonality that Bev pointed out: slips of paper with Biblical/religious references are found at the scene of the crime. Bizarre and utterly unintended! But I only awarded one point rather than two for discovering that, Bev. The judge similarity was much more obvious.

3. The Shadow of the Wolf  by R Austin Freeman, The Murder of My Aunt by Richard Hull
Inverted detective novels

4. Case of the Green Felt Hat by Christopher Bush, The Secret of Bogey House by
Herbert Adams
Golf plays an important part in the plot of each book.

7. The Mysterious Mr. Quin by Agatha Christie, Department of Queer Complaints by Carter Dickson
Each book is a short story collection which is the only book length appearance of the series characters. Full points awarded for the entire underlined sentence. One point for only mentioning short story collection.

8. Turn of the Table by Jonathan Stagge, He Who Whispers by John Dickson Carr
The primary suspect is thought to be a vampire.

9. Ten Little Indians by Agatha Christie, The Invisible Host by Gwen Bristow & Bruce Manning
Each book has an eerie exactness in their plots:  a group of strangers is invited by an unknown host who never appears and they are told by their host via a recording that they will be killed one by one. Bristow & Manning wrote their book nine years before Christie's more famous and better realized version. The Invisible Host was also turned into a movie called The Ninth Guest in 1934.

10. Traitor's Purse by Margery Allingham, Puzzle for Fiends by Patrick Quentin
The detective suffers from amnesia for most of the book.

BONUS ROUND - PICTURE PUZZLES (2 points)
Players were asked to identify a book's title and author based solely on a small section of the 1st edition dust jacket. Most of the illustrations had clues to the title. Savvy puzzle solvers could easily figure out seven of the ten without knowing anything about the book's content or recognizing the DJ. The remaining three were rather difficult to figure out based on the illustration. Having a robust knowledge of vintage mystery titles certainly helped in this section.

Click here and scroll to the bottom of the page to see the pictures. The link will open in a separate window.

DJ1: The Maltese Falcon by Dashiell Hammett
DJ2: The Silk Stocking Murders by Anthony Berkeley
DJ3: Death in a Top Hat by Clayton Rawson
DJ4: Flowers for the Judge by Margery Allingham
DJ5: Castle Skull by John Dickson Carr
DJ6: The Little Sister by Raymond Chandler
DJ7: Artists in Crime by Ngaio Marsh
DJ8: Death on the Nile by Agatha Christie
DJ9: Death in the Stocks by Georgette Heyer
DJ10: Poison Jasmine by Clyde B. Clason
Posted by J F Norris at 10:59 AM